A study in stillness 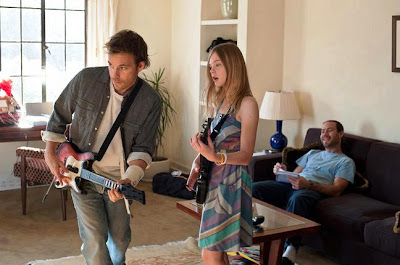 By Edward Copeland
After the misstep of Marie Antoinette, writer-director Sofia Coppola returns to more solid ground as a filmmaker with Somewhere, a very specific slice-of-life about an actor (Stephen Dorff) who needs to face personal growth as unstoppable time ages both the man, who lives out of a ritzy L.A. hotel, and his 11-year-old daughter (Elle Fanning).

Dorff, who seems to have been around forever without appreciably aging or making much of a deep impression since his very early work in films such as BackBeat, plays Johnny Marco, a successful actor but a less-than-successful father to his daughter Cleo (Fanning). It's not as if he's a deadbeat or abusive; he's quite doting when he gets his visits with his girl. It's just that the lifestyle he leads is one that makes Johnny more of a playmate than a parent, as cared for and steered by others as a child would be.

In a way, the life Johnny lives out of his hotel room reminded me of the horrible screenplay Sofia Coppola wrote for "Life Without Zoe," her father Francis' segment of New York Stories, only instead of an unsupervised child living large within the Plaza Hotel in New York with absentee parents, you have a grown man doing the same at the Chateau Marmont in L.A avoiding adult responsibilities.

Like the 1989 short, Somewhere functions essentially plotlessly, but Sofia Coppola has matured greatly since then and the result is an evocative mood piece instead of a loud mess that annoys without discernible purpose. Granted, Somewhere doesn't hit the heights of Coppola's wondrous Lost in Translation, but it's visually transfixing and emotionally moving. I do have to confess though that I can't see or hear the words "Chateau Marmont" without immediately thinking of John Belushi, so I was relieved that nothing headed in that direction.

Even though it's a very brief sequence, I also want to laud the film for the most accurate depiction of a movie press junket that I've seen in a movie (even if the questions from the foreign press at the news conference rise a bit above the level you're likely to hear). When you've attended many of these and see how wrongly they portray them in movies such as Notting Hill, it's nice to see people who know better get it right for a change.

Perhaps what impressed me most about Somewhere are the things you don't see and you don't hear. It's very quiet, almost a study in stillness. When so much filmmaking screams, "PAY ATTENTION TO ME," it's refreshing to watch a film that asks you to come to it.

Comments:
I've really liked Coppola's first three films -- including Marie Antoinette -- but Somewhere was either too subtle for me or there was no where there.

Sorry. Not by a long shot.