Music of the heart 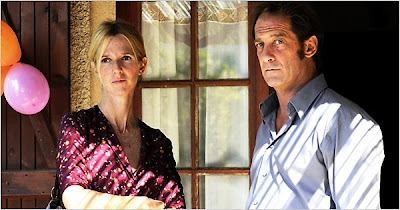 By Edward Copeland
As England Dan and John Ford Coley sang, "It's sad to belong to someone else when the right one comes along." Granted, the music that 1970s pop duo sang isn't the type that sparks the attraction between a builder and a schoolteacher in Mademoiselle Chambon, but it aptly describes their tale and the plot of the excellent movie that contains it.

Jean (Vincent Lindon) is a builder in a small French town when he visits the class of his young son Jérémy (Arthur Le Houérou) to talk about his job. While there, he meets the woman, Véronique Chambon (Sandrine Kiberlain), who has taken over the class since the original teacher had to take time off. She off-handedly mentions trouble she's having with a window at her apartment and Jean volunteers to come by and fix it for her. It's unclear whether he's already smitten at this point, but the married man soon will be.

After he's performed the task, Véronique offers him a refreshment and as he sits at her kitchen table, he spies a violin. He asks, meekly, if she would play a tune (he's even afraid he's using the wrong word by saying tune). He saw someone play once on TV and would love to hear it again. The teacher downplays her skills, insisting she's not that good, and asks if he remembers the piece, which he doesn't.

Under the pretense of sparing her any possible embarrassment, Jean suggests that she play with her back to him and so she does, though Jean really chose this stance so she can't see how the music affects him. Lindon works silent wonders as you watch the sounds of the violin work on his face and the way his entire body stands, almost slinking into a corner of the room, overwhelmed.

A few days later, Jean runs into Véronique by chance on the street. She is going to purchase paint for the repaired window, though she adds she's doing a lot of work on a place she only plans to live in for a short time. She'll explain later that she doesn't stay at any school for more than a year. If there's a reason for this — a bad love affair, unwillingness to make attachments — Véronique never says. She tells Jean it allows her to get out if she doesn't like the school, but when he asks what happens if she does like the school, she says she leaves anyway.

During that moment on the street, Jean, behaving like a nervous schoolboy not knowing how to act around the girl he has a crush on, recommends the proper type of paint and says goodbye. Something within him works up enough courage to follow Véronique into the store to ask if the piece she played is available on CD. She tells him of course — and offers to lend him some CDs. He says he would like that.

When Jean does pay a visit to borrow the CDs, they sit on the edge of her bed as she sorts through a collection of discs she's brought that contains the piece she played, but then she recommends a different one she thinks he might like, "La Valse Triste" by Hungarian composer Franz von Vecsey, and plays it. The music, played on violin and piano, affects them both and Jean tentatively takes her hand and places it on his face. She then moves his face to hers and they kiss. Instead of what you'd expect next, the two falling to the bed and making love, it just turns into a warm embrace. Then the music stops and so does the hug as Véronique wipes away a tear.

The unexpected attraction would seem headed toward an involvement. The school principal even offers her to stay since another teacher is retiring and for the first time Véronique considers it. Then a wrench is thrown in the plans when Jean's wife AnneMarie (Aure Atika) announces her pregnancy.

Director Stéphane Brizé composes Mademoiselle Chambon visually as if it were a symphony, especially in its final act which I would love to describe in detail but I won't because it would ruin the impact for those who haven't seen it.

Brizé co-wrote the screenplay with Florence Vignon from Eric Holder's novel and in some respects it resembles The Bridges of Madison County, except that it's good. It's also so much better for not creating villains: Jean's no cad, his wife's no shrew and Véronique's not out to be a homewrecker.

The other technical credits are excellent as well from Antoine Héberlé's cinematography to Anne Klotz's editing and, most especially, the original musical score by Ange Ghinozzi that complements both the film and the other pieces it uses.

What really sets Mademoiselle Chambon apart though is the amazing work of Lindon and Kiberlain, who are able to convey volumes with very few words. They give two magnificent performances in a truly moving film.

Comments:
Agreed. In terms of romances, this ranks right up there with Before Sunrise and the more recent Two Lovers