"I'm Pat fucking Tillman — why are you shooting at me?" 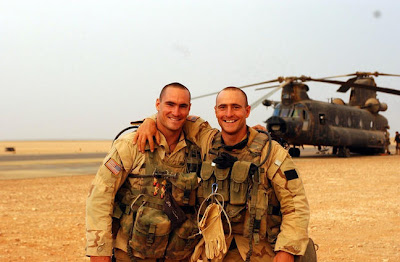 By Edward Copeland
That post title were the last words the former NFL star turned Army Ranger said before he was killed in Afghanistan by his own troops in 2004.

We are living in the Golden Age of Nonfiction. I thought it silly when the Oscars expanded best picture to 10 nominees, but I could live with them doubling the number of documentary feature nominees because documentaries get better and better. I have a difficult time cutting it down to five. I've only seen one 2010 documentary that I've given a negative review. More importantly, this meant that Oscar finalist The Tillman Story didn't make the final cut and it's the second-best 2010 documentary I've seen (so far).

For the Bush Administration, the wars in Afghanistan and later in Iraq weren't just campaigns for whatever reason they chose to give on any particular day, they also were part of a re-election strategy and whenever there was a chance to sell a positive story to the lazy eager-to-echo-anything press, they took it. So, when Pat Tillman, who earned millions in the NFL for the Arizona Cardinals, decided to give up his football career to join the fight against terrorism after 9/11, Defense Secretary Donald Rumsfeld told his subordinates to keep special watch on him. This was an American hero in the making that would make for great P.R.

Things didn't turn out that way exactly, though the government and high-ranking Pentagon officials did their best to keep their heroic scenario when Tillman was killed April 22, 2004, the initial story was the he died from enemy fire in an ambush, going so far as to credit him for saving the lives of some of his fellow soldiers and Gen. Stanley McChrystal awarded him the Silver Star posthumously. Just one problem: That was all a lie. Tillman died as a result of friendly fire and it took years and the persistence of his family to get at the truth.

Director Amir Bar-Lev gives a detailed portrait of who Tillman was both before and after his enlistment and with testimony from others who served with him, evokes a sense of outrage at the coverup, misguided accusations and fall guys the government used because their desired tailor-made American hero failed to pan out the way they envisioned. Ironically, during his unit's Iraq deployment Tillman was even there to witness the lengths they went in setting up the false tale of Pvt. Jessica Lynch's rescue. They were kept waiting 24 hours before retrieving Lynch to allow time for the camera crew to arrive. During his time in Iraq, Tillman also turned against Bush and the war effort, commenting to fellow soldiers that the Iraq war was "so fucking illegal." Bar-Lev keeps the focus moving with complete clarity and this documentary is quite a change-of-pace from his previous one, 2007's My Kid Could Paint That.

Narrated by Josh Brolin, The Tillman Story shows the true Pat Tillman, one that defied all stereotypes one would lump on the star athlete. He was a well-read man (Chomsky and Emerson; most religious texts, despite his atheism) who graduated from Arizona State with a 3.8 G.P.A. While the administration and the media were eager to wrap Tillman's decision to forgo his lucrative NFL career with a simple patriotic motive, Tillman himself refused interviews on the subject.

Even though both he and his very close younger brother Kevin joined up as Army Rangers, Tillman was determined to keep his reasons private. However, before he'd ever made the decision to enlist, various NFL players were filmed giving reactions to the 9/11 terrorist attacks and this footage was usurped by the Pentagon in their P.R. efforts to define Tillman's motive, be it true or not.

The entire Tillman family could be viewed somewhat as iconoclasts, compared to most Americans, so as far as I'm concerned that's what endears them to me all the more. When his family first learns of his death, they were given the false story of the ambush and the enemy fire. Still, even at the large, made-for-television memorial service Washington assembled (despite the fact that on his enlistment papers Pat Tillman specifically said he wanted no military funeral. Military officials even tried to take advantage of his grieving wife Marie to get Pat buried at Arlington.), while speakers spoke of God's blessings, etc., ignoring Pat's quite vocal status, like most of his family, as an atheist, his youngest brother Rich thanked the previous speakers for their thoughts but said, "Pat isn't with God. He's fucking dead."

Once soldiers on the scene spoke out and the Pentagon was forced to admit that Tillman was a victim of friendly fire, D.C. realized they picked the wrong family to screw with as his mom began a years-long campaign to get at the truth about the coverup. The story as told proves both inspiring and frustrating, as the Army drops so many documents, most redacted, upon Dannie Tillman, that she and another veteran start approaching them like some sort of crossword puzzle to decipher what names and words are blacked out.

In one of the most infuriating incidents, Lt. Col. Ralph Kauzlarich, who Tillman served under in Afghanistan, went on ESPN and made comments to the effect that the reason the Tillman family wouldn't let it go and just accept the Army's story was that because they were atheists and didn't believe in God, it would be hard for them to accept any truths. Eventually, after they finally got a congressional inquiry, Kauzlarich was demoted in retirement and remains the only person who received any sanction for the coverup.

On the other hand, the soldiers who did speak to the truth, were all punished in other ways for essentially being whistle-blowers.

Credit for the excellence of The Tillman Story should also be given to Mark Monroe for compiling this massive amount of information into a workable script for Bar-Lev to direct into such a coherent, compelling and, yes, chilling film. It almost makes me want to synopsize the entire documentary, but it's better to see it for yourself.

The ultimate irony about Pat Tillman is that the Bush Administration wanted to mold him into a hero for their own cynical, political purposes but by the covering up of the way he died, it enabled us to see who the real Pat Tillman was and he was more patriotic and a hero on a far grander scale than any P.R. flaks could have dreamed up. It's tragic that he died the way he did, but it's reassuring to know that men like him still exist in the first place.

Comments:
Hear, hear. Great look at this one, Ed.