For him it's therapy, for the world it's art 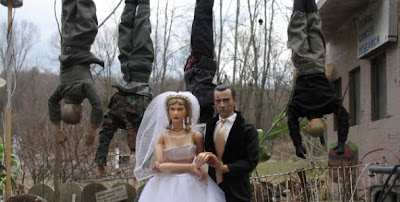 By Edward Copeland
When Marwencol began, I had no idea what kind of documentary it was. I knew the title from various lists, but hadn't read reviews, so I didn't know the subject matter. (In an ideal world, I would love if I could step into all films blindly like this, knowing only that they had garnered some praise. I don't want to accidentally find a Rob Schneider comedy had sneaked into my DVD player.) Needless to say, I was more confused as it opened on hands playing with dolls, one dressed in fatigues, but I was intrigued. Then Jeff Malmberg's film about a man named Mark Hogancamp began to make sense, though it would take much of the film to put all the pieces together, just as Hogancamp was trying to do with his shattered mind.

What broke Hogancamp were five men who gave the 38-year-old a savage beating outside a bar in upstate New York in 2000. The attack inflicted so much damage that Hogancamp lay in a coma for nine days and when he did awake, most of his memory had vanished and he'd lost the ability to walk, talk or eat. After much therapy, he regained those abilities and learned bits and pieces about his past — such as the fact that he was once married, had been an accomplished artist and was a raging alcoholic.

In 2002, Hogancamp started building 1/6th-scale dioramas and clothing and naming dolls of different types — GI Joes, Barbies, etc. — to construct a fictional Belgian town during World War II called Marwencol. He would stage sexual and violent fantasies of what went on there (including a bar that advertised nightly catfights) and gave the dolls names to represent real people in his life, including himself, his mom, a waitress at the restaurant where he works and eventually even Malmberg, the director.

It might seem odd to see a damaged man spending so much of his time doing this sort of thing, but it soon becomes clear that through his WWII scenarios in Marwencol, Hogancamp had found a way to heal the psychic wounds that remained from the attack, which still remained a mystery to him as to why it happened. He sets up a situation where some Nazi dolls capture and torture the doll that represents him only to be rescued by two butt-kicking women.

When Malmberg discovers that Hogancamp doesn't just set up these dioramas, he also photographs them, he shows the pictures around and an interest develops from a Manhattan gallery in showing Hogancamp's unique work. The thing is that Hogancamp isn't so sure if he likes the idea: He's made Marwencol as a therapeutic aide for himself to help him with a world he's carefully avoided since his beating — he's not so sure he wants to re-enter that environment, especially as the center of attention.

It's interesting how many documentaries (and good ones) from 2010 concerned the outsider artist and the art world in some way. We had Jean-Michel Basquiat: The Radiant Child, with an outsider artist who sought the fame but would have been compelled to make his art even without it; and Exit Through the Gift Shop, with the most outside of outsider artists, Banksy, in what may have been a hoax, conjuring an artist out of a nobody who doesn't even do the work but whom the hoity toity fawn all over anyway. In Marwencol, we have the accidental outside artist. He never set out to be one and gets annoyed at attempts to anoint him one.

Director Malmberg, who also edited, cuts the film very judiciously in how he lets the full story (or as much of the story that we'll ever know) come out about Hogancamp. A hint here, a dropped sentence there, they all start adding up to fill in the blanks about who Hogancamp was before the beating and whether through Marwencol, he can finally find not so much the Hogancamp that existed before, but the Hogancamp that he never allowed himself to be.