Tied Up in Forget-Me-Nots 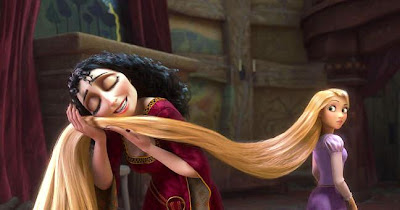 By Liz Hunt
Seems like every holiday the Walt Disney Co., or its other movie monster Pixar, roll out a movie perfect for families — especially when those children aren't quite old enough or brave enough to take in Harry Potter and the Deathly Hallows: Part 1 or Unstoppable.

The early trailers for Tangled didn't look all that great. I expected a formulaic story of a poor little lost princess trapped in a tower, a brave young man — and after a few bumps in the road — a happy ending. I was delighted to be proved wrong.

While the Rapunzel story is similar enough to Tangled they could claim a distant kinship, the tower and hair may be the only two common plot devices. Disney's Tangled begins with a drop of pure sunlight falling to earth. A beautiful flower blooms where it landed and this flower can cure everything, including old age. An ancient hag had kept the plant hidden, but one day she forgets and it's discovered by a group of knights on horseback.

The plant is carried to a nearby kingdom where the king's pregnant queen is sick. The flower not only cures the queen but imbues their darling Princess Rapunzel's sunny gold hair with the same power. When the quickly aging hag discovers this, she kidnaps the tiny princess and hides her deep in a hidden valley at the top of the well-known tower. The villain has discovered if she cuts Rapunzel's hair, it turns brown and loses all its power.

I don't remember this from any story, but the princess grows up calling Mother Gothel the hag, "Mother." The older woman stays young by brushing Rapunzel's now ridiculously long hair and letting the young lady sing a song that triggers the magic.

Like modern Disney heroines, Rapunzel yearns to be free of the tower and explore the world, especially the village that launches hot air lamps into the sky one night a year. Every time she asks, Mother Gothel says no, assuring her that "Mother Knows Best," and everyone will only want her to use hair.

Rapunzel is ready to grab all her hair, her lizard, Pascal (who looks like it escaped from The Emperor's New Groove) and run far away. While that is happening, three burglars break into the nearby castle and steal the princess's crown. They don't get far before the royal guards find them and we meet the real scene stealer of Tangled: Maximus the horse.

The young handsome thief, the one with the crown, finds a way into the tower and gets knocked unconscious by the girl. On her birthday, Rapunzel talks the old woman into going into the village for a few supplies and makes a deal with the handsome young man named Flynn Rider to get her out of the tower. He doesn't say much about all the hair, but gets her outside where she is enjoying her first bit of free time in the fresh air.

Maximus, part bloodhound and the smartest horse I've ever seen, finds them and the slapstick between the horse and Flynn is enough to make the entire movie worth the admission price. Throughout the rest of the movie, they bicker, acting like naughty little boys except when Rapunzel gazes their way.

Disney needs to build the pub "The Swaddling Duck" and fill it with lethal looking criminals with hearts of gold. Only in a Disney movie can you listen to a song where one huge man with a hook for one hand wants to be a concert pianist and another huge man's only desire is to be a mime.

All her new friends come in handy with Mother Gothel realizes her treasure is gone. Flynn takes Rapunzel to see the carnival that ends with the release of the little lamps and discovers they are sent aloft in hopes the lost princess will see them and return home.

The last third of the movie is mostly predictable, except the behavior of Maximus, who has decided he will be Rapunzel's champion. Disney has a stable full of good animated horses, but they have given this prissily trussed up white horse a true sense of humor, and a wicked sense of what to do to make Flynn's plans fail.

The voices of Mandy Moore, Zachary Levi and Donna Murphy mix well as the lead characters. Listen to the thugs in the bar and you may recognize the voices of Richard Kiel, Jeffrey Tambor, Brad Garrett and Ron Perlman.

Tangled shows Disney can appeal to any audience, any time, and do it at will. Don't think you need children to go see this movie. Go for the sheer joy of silliness, and of course, to see how everything in the Disney universe mostly does live happily ever after.