Re-examine all that you have been told... dismiss that which insults your soul 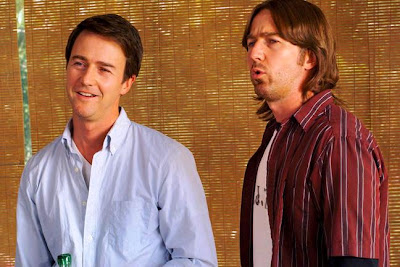 By Edward Copeland
Actors relish the chance to play twins and Edward Norton makes the most of it in Tim Blake Nelson's unusual Leaves of Grass where Norton gets to play brothers, one who has abandoned his Oklahoma roots to teach classical philosophy on the East Coast, the other who is just as intelligent but thoroughly Okie and uses his brain for designing intricate hydroponic marijuana growing techniques.

Brown professor Bill Kincaid has become a minor star in his teaching field, earning magazine covers, an offer from Harvard to launch his own department and lovestruck students who try to seduce him while they recite love poems they've written in Latin.

Back in the Little Dixie section of Oklahoma, Bill's brother Brady is facing problems from rival dealers who think he's trying to encroach on their territory and a local kingpin who financed his massive hydroponic project but has yet to be repaid for his investment.

Soon, Bill receives a call from Brady's best friend Bolger (Nelson) with the sad news that Brady has been murdered by a crossbow so, for the first time in years, Bill is hopping a plane back to the Sooner State where his perfectly capable mom (Susan Sarandon), a pothead in her own right, has chosen to live in a retirement home just because she thinks it makes for an easier life.

Bill has worked long and hard to shed himself of all Oklahoma ties, so the thought of going back does not appeal to him. He doesn't want to see his mother and he's especially pissed off once he gets there and realizes that Brady wasn't killed but just used the story as a ruse to lure him there so he'd have an alibi to be in two places at once.

The one positive Bill finds in the trip is meeting a high school English teacher named Janet (Keri Russell) who seems to be the only person on Bill's wavelength, but chose to stay in Oklahoma anyway. In one scene, she takes Bill noodling for catfish and as Bill discusses his lot in life, Janet surprises him by tossing off some Whitman. Bill tells her that he never though he'd hear Whitman recited to him by a woman gutting a catfish to which Janet replies that it's the only way Whitman should be recited.

Leaves of Grass plays as a true original. Much of it comes off as wicked farce, somewhat in the vein of Raising Arizona, but at moments it will surprise you with some real poignancy. Tulsa native Nelson also never goes for the easy laughs of painting all the Oklahomans as rubes.

He's also assembled an impressive cast for a low-budget indie. In addition to those mentioned, there's also fine work by Melanie Lynskey, Josh Pais, Maggie Siff, Pruitt Taylor Vince and, best of all, in little more than a single scene, Richard Dreyfuss as a Jewish philanthropist out of Tulsa who also happens to finance the marijuana business on the side to fund aid to Israel.

Nelson's triple-threat work here pays off as he's created a very funny, very human crime story with philosophical underpinnings. It's one of a kind.