Permission to be an asshole 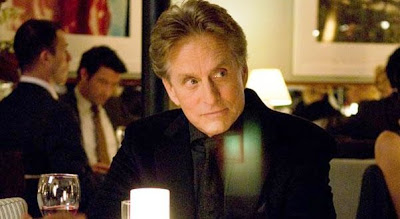 By Edward Copeland
I'm not going to pretend that I've always had the best viewer-actor relationship with Michael Douglas despite his current illness. In fact, for most of his films, he plain got on my nerves, but that all turned around when he gave a truly great performance in Wonder Boys. I'd heard similar talk about his work in Solitary Man and I finally got the chance to see it. While it's nowhere close to his work in Wonder Boys, he is good in a film that almost plays as a justification for his life both on and off screen.

Written by Brian Koppelman who co-directed the film with David Levien, Douglas stars as Ben Kalmen, a man so successful with his chain of car dealerships that it's earned him riches and magazine cover stories. As the film opens, a trip to the doctor suggests that perhaps he has some cardiac problems and Kalmen needs more tests.

Time passes and when we meet Ben again, he's divorced from his wife Nancy (Susan Sarandon) and he's barely avoided jail after perpetrating a fraud through his dealerships that ended up wiping them all out as well as most of his cash and turned him into a nonstop lothario despite his relationship with Jordan, a successful divorcee (Mary Louise Parker) with a cynical college-bound daughter named Allyson (Imogen Poots), who seems to be a Ben in gestation only with female organs.

Though neither particularly wants to do it, an under-the-weather Jordan insists that Ben take Allyson on a trip to his college alma mater where he's donated so much money that the library bears his name and where he might be able to pull strings with the dean. The two reluctantly go together and it ends up making Ben's capacity for self-destruction even worse.

While Solitary Man is often funny and Douglas does well as man who acts as if he's wiser and a better tutor than he really is, especially to a student he meets at the college (Jesse Eisenberg), the film doesn't quite make the leap to greatness. The film plays more as a slight short story and when it gets to its denouement when he comes clean with his ex-wife about what prompted the things he did, it seems anti-climactic since the film's first scene pretty much gives that game away.

It's hard not to read autobiographical aspects of Douglas' own life in Ben character given that Ben's insatiable lust does correspond to Douglas' past trip to rehab for sex addiction (There's an addiction to have. Are they the same 12 steps?) With all of the jerks that Douglas has played in his career, characters that did put me off him as an actor for the most part until Wonder Boys, I wonder if he saw this role as a bit of a mea culpa for his life if not his career. The difference for me between those earlier roles and these more recent ones is that they come off as unlikable jerks in the films, who get what's coming to them. While Ben might be as big as a jerk as some of the others, he does have a charisma that makes you like him anyway and to feel sympathy for him.

All the supporting cast members perform well including Sarandon, Jenna Fischer as Ben's daughter and Danny DeVito as one of Ben's few remaining friends who explains perfectly how he avoids the temptation of the young co-eds in a great speech about his long marriage to his college sweetheart and Parker as the vengeful girlfriend.

Still, the two standouts are Douglas and Poots, playing opposite sides of a similar coin. Douglas' Ben may have rationalized all the bad decisions he's made, but Poots' Allyson really has no such excuse. Perhaps she was just born that way.