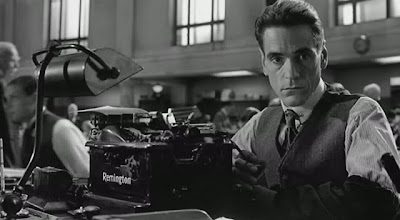 By Damian Arlyn
Today marks the 20th anniversary of the release of Kafka, the first film Steven Soderbergh directed after his award-winning sex, lies, and videotape. I saw it many years ago on VHS and, although I didn't completely understand it, really enjoyed it. It was a tense, atmospheric thriller that starred Jeremy Irons in the title role and included a cast of such distinguished actors as Jeroen Krabbé, Ian Holm, Joel Grey, Armin Mueller-Stahl and Alec Guinness to support him. It was shot entirely in black and white (with only one brief color interlude near the end) and served as my introduction to Steven Soderbergh, a filmmaker who would later become one of my personal favorites. I was looking forward to watching it again for the purposes of writing this article. Unfortunately, it was not to be.

After much searching (and in a strange turn of events which perhaps Kafka himself would have appreciated), I discovered that the film has yet to be released on DVD here in the U.S. and there are apparently no plans to do so anytime soon. Since I am unable to revisit it and my memory of the film is somewhat sketchy, I fear I am unable to compose a proper tribute for it. However, it occurred to me that, in a strange way, this might perhaps be the most fitting tribute that could be done for a film that features the isolated and misunderstood Franz Kafka as its protagonist. I do hope that the film eventually gets released on DVD/Blu-ray someday (it deserves it) and if it does, I can highly recommend checking it out. In the meantime, I'll simply end this piece with a quote from the famed Prague-born writer:

"Life's splendor forever lies in wait about each one of us in all its fullness, but veiled from view, deep down, invisible, far off. It is there, though, not hostile, not reluctant, not deaf. If you summon it by the right word, by its right name, it will come."

Comments:
This is the problem I warn people about that will happen not only with constantly changing formats but with the ludicrous remakes that will make superior originals disappear from view. I'd hoped earlier this year to do a tribute to John Sayles' City of Hope but it never made the leap to DVD from cropped VHS versions either. The only available way to see it is on Amazon On Demand and I could never get anyone to assure me that it would be in the proper aspect ratio.

Ah, CITY OF HOPE. I saw that around the same time I saw KAFKA (I was working in the video store and our library was still predominately VHS) and I loved them both. There are a lot of great, forgotten gems that have yet to make their way to the latest format.

Of course DVD isn't even the latest format anymore.