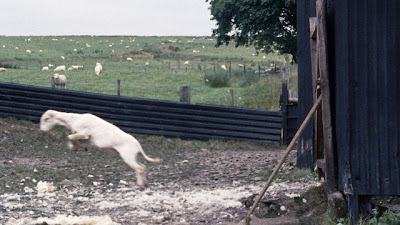 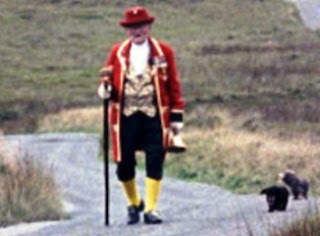 By Edward Copeland
When the Welsh documentary Sleep Furiously begins, a colorfully costumed man traverses a barren rural road bearing a walking stick, followed by two small dogs, ringing a bell. Promotional photos identify the individual as the town crier, but he's not relaying any news, not that anyone is near to hear it if he had anything to share. That's similar to the approach director Gideon Koppel takes with his unusual documentary about a small farming community in mid-Wales. The film, which played around Europe and the U.K. in 2008 and 2009, will make its U.S. theatrical release debut Friday at New York's Cinema Village while, beginning at midnight Eastern time Sleep Furiously also will be available for 24 hours online at Fandor.com along with its companion featurette A Sketchbook for the Library Van. Following that 24 hour period, Sleep Furiously will vanish from Fandor's library as it continues to play theatrically but A Sketchbook for the Library Van, a shorter film Koppel made that enabled him to make Sleep Furiously, will remain on Fandor.

Sleep Furiously is the second time a film's distributor, in this case Microcinema International, has teamed with Fandor to pioneer a new way of coordinated digital-theatrical releasing of films. Fandor's first effort came in June with the re-release of the previously unavailable classic 1967 mockumentary David Holtzman's Diary, which I will review tomorrow. For most living in America, Fandor remains the only place David Holtzman's Diary can be seen since it has never been released on a Region 1 DVD, though Kino Lorber has announced that a DVD and Blu-ray are forthcoming on Aug. 16 and are available for pre-ordering now.

In Koppel's director statement that's included in press materials, he emphasizes that when he set out to make Sleep Furiously, he sought to make a film that was "evocative" of the mid-Wales farming community of Trefeurig where his Jewish parents sought refuge rather than being "about" the area as you would find in a more typical documentary and that's exactly what he does.

The title's origin comes from a sentence composed by Noam Chomsky in 1955 that said "Colorless green ideas sleep furiously." Chomsky was making the point that a sentence could be grammatically correct while at the same time being semantically nonsensical. That serves as a useful bookend for the quote that closes the film:

It is only when I sense the end of things that I find the courage to speak. The courage but not the words.
With the exception of John Jones, who drives The Library Van, this isn't a documentary where you really get to know the inhabitants of Trefeurig. Instead, Koppel just turns his camera on and observes what goes on, leisurely moving from school art classes to sheep shearing, from everyday conversations to town meetings about the school's closing. You'll hear children rehearse music over images of a farmer gathering bales of hay. A downpour won't stop the judging of a dog show and the pooches, some wearing raincoats, will receive ribbons. You'll see lots of dogs, though I admit I was disappointed to only see one example of the corgi breed that my late Leland was since Wales is her breed's ancestral home. Often, you'll just gaze at the beautiful imagery such as a time-lapse sequence when we watch the clouds move across the horizon, changing the shadows being cast across a lakeshore.

Seasons change, sometimes people speak (in Welsh as well as English) and the pastoral beauty of the landscape blends beautifully with the electronic musical score of Aphex Twin. The synopsis states that Sleep Furiously shows a dying way of life in terms of an agricultural community giving way to a mechanized world, but I didn't really take that away from the film. It's more a tone poem about Trefeurig than a documentary of its demise. 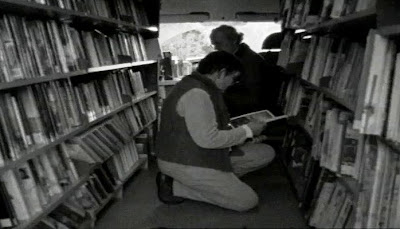 The featurette by Gideon Koppel, A Sketchbook for The Library Van, works almost as the exact opposite of Sleep Furiously. Koppel filmed it in 2005 as he was seeking funding to make Sleep Furiously.

Filmed in black and white, while there are some shots of Trefeurig and The Library Van, the bulk of its running time consists of members of the community standing against a white background and sharing tales about themselves and Trefeurig. In a way, it might be more interesting to watch Sketchbook first so when some of the same people pop up in Sleep Furiously you'll have a better idea who they are.

The one detail both films have in a common is the focus on The Library Van, which is interesting, considering what a small, rural area John Jones continues to service, bringing books, in both Welsh and English, to members of the community to read. The synopsis may say the feature's emphasizes the dying of a way of life, but really both Sleep Furiously and the short may have agriculture in their hearts, but they have reading on their minds and that's always a good thing — and while some modernization inevitably occurs, at least they know nothing of a Kindle and read the way you should.