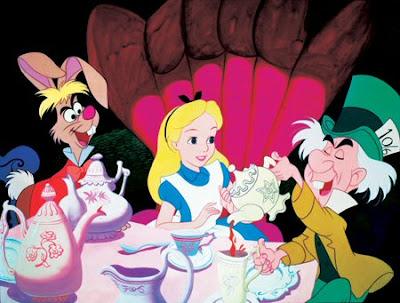 By Damian Arlyn
Alice in Wonderland is Disney's most bizarre animated feature. In choosing to adapt the British fantasy novels Alice's Adventures in Wonderland and Through the Looking Glass, Disney jettisoned his usual strong narrative backbone and compelling characters for a series of absurd, drug-induced comic vignettes populated with characters of varying degrees of insanity. The resulting product is indeed lively, colorful and humorous at times but it is also dark, disturbing and ultimately emotionally un-involving. It also, in the eyes of many literary critics, distorts its beloved source material beyond all recognition. For these reasons, Alice in Wonderland was a critical and financial disappointment when it premiered in theaters on July 28, 1951. So why are we still talking about it 60 years later? Why, in spite of these shortcomings, is Alice in Wonderland considered by many to be, if not quite on the same level as Snow White or Pinocchio, a Disney classic today? My guess is because children love it and they are ultimately the audience for whom Disney made the film.

Walt had long wanted to make a feature based on the Alice stories penned by the British author, mathematician and logician Charles Dodgson (a.k.a. Lewis Carroll). He had considered it at one time as his debut animated feature and had returned to it many times over the years as a possible combo live-action/animation movie (much like what would eventually be seen in those now famous sequences from Mary Poppins and Bedknobs and Broomsticks). However, it wasn't until 1946 that work actually began on the project that would eventually become Alice in Wonderland and in the end Disney wisely decided to make it completely animated. In many respects, animation was the perfect medium for the fantastic tale of a proper British girl who falls down a rabbit hole and ends up in a land of nonsense and madness. Nowadays, of course, it is far easier to depict such a world with CGI (and indeed Tim Burton recently fashioned a lavish, whimsical and obscenely successful semi-sequel, with his friend Johnny Depp as the Mad Hatter, doing just that) but in 1951, this was the closest one could get to seeing such fanciful images come to life on a screen. 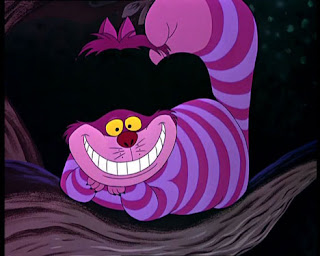 It probably seems redundant to compliment a Disney film on the quality of its animation (like complimenting Muhammad Ali on his boxing ability), but the animation on display in Alice in Wonderland is indeed superb and should be acknowledged. Disney animators have always had a knack for drawing engaging, believable characters and here they have outdone themselves creating beings who were not only soft, cute and often cuddly, but also odd, grotesque and sometimes downright scary. For example, while the Queen of Hearts never comes off as more than an ill-tempered bully, that memorable feline known as the Cheshire Cat so delights in his lunacy that he has actually been compared by some to Hannibal Lecter. Furthermore, as Alice makes her way through the strange, alien world that she has (literally) stumbled upon, we are treated to some stunning visuals all around her. Perhaps because the animators and background artists were usually rendering relatively realistic environments in films such as Bambi, this time they had far more room to let their imaginations run wild.

Music has always been a strong element in Disney films and this one in particular is also very music-heavy. Some songs feature lyrics taken from Carroll's text (such as "The Walrus and the Carpenter" and "Twas Brilig") but many are original tunes written specifically for the movie. None of them are as iconic as "When You Wish Upon a Star" or even as supremely catchy as something like "Bippity Boppity-Boo" but a few are memorable enough to warrant humming afterward (including "The Un-birthday song" and "Painting the Roses Red"). The voice acting, provided by a cast of Disney regulars, is uniformly good. Ed Wynn as the Mad Hatter, Sterling Holloway as the Cheshire Cat and Verna Felton as the Queen are particular standouts.

Despite of all its technical achievements, Alice in Wonderland ultimately fails to resonate. The lack of an actual plot on which to hang the series of outrageous episodes, gives the film an aimless, meandering feeling. Also, Alice is one of the more annoying Disney protagonists (the actress voicing the character, Kathryn Beaumont, does a decent enough job but her talents were put to much better use as Wendy Darling in Disney's Peter Pan released two years later). From the beginning she seems like an arrogant, spoiled child who has no 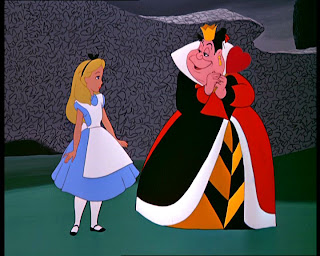 real arc nor comes to any kind of self-realization (other than that she wants to get home). Disney himself even admitted that she wasn't very likable. However, in spite of (or perhaps because of) these flaws, Alice in Wonderland still is a beloved entry in Disney's canon of animated features. I remember watching it all the time as a youngster and, though not understanding everything that was going on, enjoying it nonetheless. Though I still have affection for it, I had to grow up to realize how mediocre it is compared to Disney's usual fare. The anarchic tenor, "stream-of-consciousness" transitions between the set pieces and wacky slapstick-oriented antics are exactly the sort of things that appeal to a youngster who is no older than seven. A child won't be bothered by the lack of story, depth in character or logical coherence to the events occurring on screen. They're not going to care a fig for Carroll's satirical symbolism or his wonderful use of the English language that Disney virtually ignored. They'll simply follow Alice on her trek through this bizarre world that feels a lot like a dream (which, in fact, it turns out to be in the end) laughing at the sheer silliness of it all and then when it's over, move on to the next thing. It is, in some respects, the perfect "children's animated film" and in that regard at least, Disney succeeded in what he set out to do. 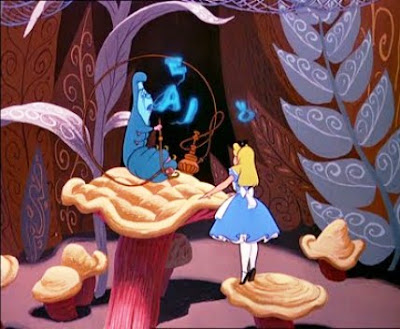 Comments:
"Though I still have affection for it, I had to grow up to realize how mediocre it is compared to Disney's usual fare."

Same here, Damian. I like Alice in Wonderland well enough, but I loved it so much more when I was a kid because, hell: when I was a kid, I practically loved *all* of the early Disney films. It's when I reached my mid-teens and began to learn more about how Disney started losing quality control around the late 40's and early 50's that I was able to distinguish the masterful films from the just-pleasant ones. Alice strikes me as being as good as Peter Pan: it's better than the movies Disney made in the 60's and 70's (101 Dalmatians; The Jungle Book; The Sword in the Stone; The Aristocats; Robin Hood, etc.), but it simply isn't as magical as Snow White, Pinocchio, Bambia and Fantasia were. Then again, I think the only modern Disney film that ever held a candle to those undisputed masterpieces was The Fox and the Hound.

I suppose the movie should be complimented for having a lot of memorable images (the Cheshire Cat; the gnome rats; the ill-fated cards painting the roses red), and I actually like Kathryn Beaumont as Alice: I identified with her naivete when I was younger. Still, "lack of emotional involvement" says it all. Every time the movie ends, and the sister says to Alice, "Come on, it's time for tea," I just want to jump up and complain, "That's IT?????"

I actually think PETER PAN is superior to ALICE, but that could simply be due to the fact that its source material lends itself to a more exciting story. Plus, give me Captain Hook over the Queen of Hearts any day. I also liked Kathryn Beaumont as Alice I just thought her great vocal performance was kind of wasted on a totally uninteresting character. Wendy had a similar sound but more personality.

Totally agree on FOX AND THE HOUND. I grew up loving that one too and when I watched it recently thought it held up pretty well. My pick though for the best Disney animated feature prior to their "Renaissance" in the late 80's/early 90's was THE GREAT MOUSE DETECTIVE.