Restoring a bit of faith in genuine goodness

By Edward Copeland
With the amount of mischief, malfeasance and worse that goes on in the world, such as that conducted by the companies, our government and regulatory agencies which led to the BP oil disaster in the Gulf of Mexico one year ago today, it's hard not to be cynical. Then you watch the documentary short Saving Pelican 895, which debuts on HBO tonight, and see all the people devoted to cleaning, rehabilitating and saving the birds coated by oil by the spill, and your hardened heart reminds your brain that there still are good people in the world. As one of the workers at the Fort Jackson Oiled Wildlife Rehabilitation Center of Louisiana says in the film, "How can people question that we shouldn't care for these animals?"

Directed by Irene Taylor Brodsky, who was nominated for the 2008 Oscar for documentary short subject for The Final Inch, Saving Pelican 895 focuses on the plight of the brown pelican, Louisiana's state bird, whose history in the state has been one hard struggle. What makes the brown pelican unique among pelicans is that it's the only pelican that dives from the air for its fish. When there began to be a massive use of pesticides along the Mississippi River, it began to kill off the birds, placing them on the endangered species list for 45 years until 1963, when there were none left in the state.

A massive immigration effort imported brown pelicans from Florida to Louisiana and the program proved so successful at repopulating the bird in the state that it was removed from the endangered list in November 2009. Five months later, BP's Deepwater Horizon exploded. Some species just can't catch a break, but this old bird proved sturdier than others. Conservationists, government agencies and activists joined forces to rescue the oil-soaked pelicans and take them to the Fort Jackson facility to be cleaned and rehabilitated before their release to a new pelican colony far removed from the spill site.

In the first three months after the spill, this effort rescued 894 brown pelicans. The film specifically focuses on the pelican given the moniker LA 895. As one of the staff veterinarians explains, an absolute rule they must follow is to never name any of the birds they are treating to prevent becoming too attached should a bad outcome happen.

One of the main interview subjects is the man who leads most of the rescue efforts along the coast itself, state biologist Michael Carloss, who admits that at the beginning of the operation his "dreams are almost 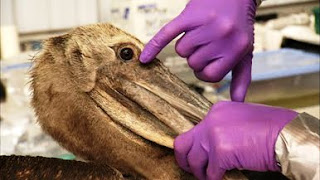 nightly of oiled pelicans." LA 895 was thought to be about 10 weeks old, meaning he didn't even know how to fly yet. It was assumed his parents were rescued separately and wondered where he was since in the early weeks of a brown pelican's life, both sexes keep close watch over the fledglings, or that they may have died. The rig explosion happened right in the middle of the species' breeding season, so many of the rescued pelicans were much younger than the birds the rehabilitation center usually sees, meaning the workers and volunteers had to be much more involved than usual. They try to hand-feed the birds only when absolutely necessary because part of the program is to ensure that by the time the pelicans get released, they still fear humans and retain their wildness and won't approach people outside expecting to be fed.

Watching the entire process that these birds go through and how dedicated these people are to saving them truly is moving. The film also has nice original music by Joel Goodman. The documentary makes the point that the U.S. is the only country that requires oil companies to foot the bill for saving wildlife they've inadvertently harmed, a law passed after the Exxon Valdez wreck in Alaska. I do have to ask if that's accurate considering that with the record profits the oil companies make, they still get subsidies from our corrupt Congress, so doesn't that mean it's ultimately taxpayers who are paying? Not that I mind since it's more than a worthy cause, but seeing the reports of how BP has skirted much of its financial responsibilities for the environmental and economic disaster it created along the Gulf Coast, I hated hearing it sound as if they were being forced into good corporate citizenship. (Just this morning, there were more tales of how BP is STILL dragging its feet to avoid paying people's individual claims and, just to make you angrier, even though former BP CEO Tony "I want my life back" Hayward is no longer an active executive, he will retire next year at age 55 with an annual pension of nearly $1 million.)

The heroes in Saving Pelican 895 are the men and women who devote themselves to saving these creatures. It restores part of my faith in humanity. It also shows the strength of these birds, who had to be evacuated during part of the rehab process when a hurricane threatened. As Carloss says near the end, "With all they've been through, they really are survivors. These pelicans are tough." 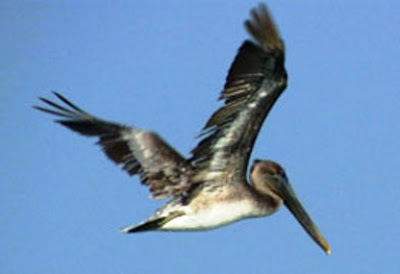