Climb on down Jacob's Ladder 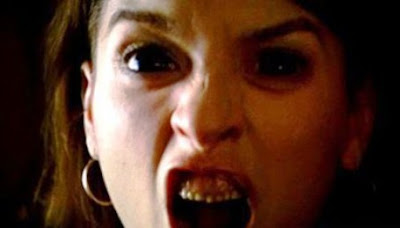 By Squish
As thrillers go, Jacob's Ladder incorporates a heavy dose of the genre's typical themes of paranoia and conspiracy, but tops it with those wonderful cherries that are one's dark time of the soul and demons of the past — both literal and figurative — putting Jacob's Ladder right in the lap of graphic fear and gory terror, all while keeping us guessing 'til the end.

In short, it's the story of Jacob Singer, a Vietnam war veteran who experiences strange and terrifying hallucinations. When other vets from his old unit approach him with the same visions of Hell and its demons, he begins to investigate the cause, all while facing terrors of his own. I dare not delve too deeply into the plot elements in fear of spoiler spilling, but let me introduce you to the first scenes.

We open in 'Nam. A bunch of soldiers yukking it up see movement in the trees and the battle is on. This one's strange though. Instead of the usual bullets and bombs, some soldiers are on the ground because of 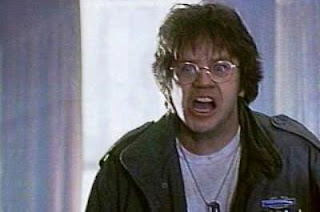 convulsions. Amidst it all, our hero suffers a terrible injury. Flash forward to Jacob on a subway, reeling from what is obviously the flashback of his past. An aura of strangeness seeps into him and his audience as a simple question to a fellow passenger is met with a glaring gaze. Jacob then glances over to a bum sleeping on the subway, seeing what looks like a slithering tail/member/icky thing writhing beneath the wretch's clothing. He jumps off the train only to find his stop's station locked up. Cursing under his breath, Jacob risks the tracks and walks through the underground. Soon however, another train is racing for him, and he barely has the time to get out of its way. As it rushes past, he sees the train's passengers glued to the windows watching him. As the subway train fades into the distance, he sees one lone man, one lone... thing, staring back at him, inhuman. Cut to Jacob arriving home to his loving girlfriend, and thus ends the introduction of Jacob's Ladder.

What sets this film apart from other thrillers is the pacing, the acting, the harrowing doubt, the confusion and ordeals that Jacob Singer must suffer, deftly acted with Tim Robbins leading us down the ladder to the rabbit's hole. If it sounds like I'm saying that nearly every aspect of this production is exceptional, I am. What made it extra special for me was the symbolism, and let me tell you I'm not one who tends to dwell too much on symbolism in film. In this, my second viewing, and being a particular fan of the myth and fiction of angels and demons, I was quite appreciative when I caught snippets of lore throughout down Jacob's bottomless pit of woe.

One simple example is his girlfriend's name: Jezebel. Another nice example surrounds one of our mysterious recurring characters who comes forward to Jacob Singer, revealing mysteries and giving him a shot at a solution to his problems. His name is Michael Neuman. The Archangel that is the right hand of God with the scales of justice as his primary symbol — the Archangel that defeated Lucifer in the war in Heaven — was named Michael. Add 'New Man' and the potential salvation that he offers is complete. There's also Jacob's dead son, Gabriel, also the name of another of Heaven's Archangels, the Archangel of death. To me these were the little touches that made Jacob's Ladder just a little better, and made it a night to remember.

Comments:
Yep, it's a great one. Unsettling, harrowing, but with a twist. Thanks, Squish.

Yes, this is a fantastic film. One that I love revisiting every so often. There is some really, creepy, unsettling imagery in this film, like the faceless surgeons. Aigh. Still gives me the heebie jeebies just thinking about 'em.