"People forget the Triangle fire at their peril...If people want to know what deregulated industry
would look like, look at the bodies on the sidewalk outside the Triangle building."
Leigh Benin, Adelphi University labor historian 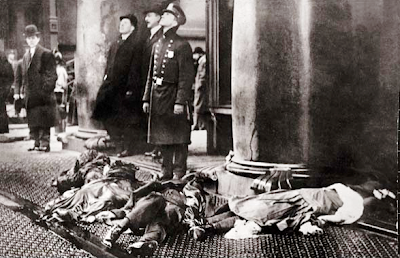 By Edward Copeland
With big corporations seeking to gain more and more power by using bought-and-paid-for politicians to strip away regulations and weaken workers' rights, there couldn't be a better time to look back at the tragedy of the Triangle Shirtwaist Company fire, which killed 146 people 100 years ago March 25 and brought about the reforms and labor movements billionaires and the historically ignorant seek to dismantle today. A well-done and brief primer on the fire and the events leading up to it and its aftermath premieres on HBO tonight. Triangle: Remembering the Fire debuts at 9 p.m. EDT and PDT/8 p.m. CDT. 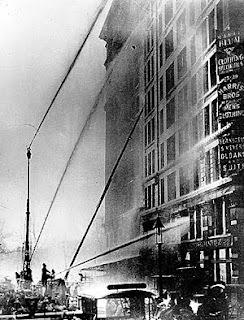 For those unfamiliar with the story of the Triangle fire, this 45-minute documentary gives you almost all you need to know about the 100-year-old tragedy and offers lessons needed for today as it seems we risk the rise of a new Gilded Age where tycoons value profits over the safety of their workers and the government at both the state and national level seems to be more-than-willing co-conspirators with its push to deregulate anything and everything. If one wants to look for modern examples of this, they need looks no further than the lack of safety enforcement at various coal mines that have cost many miners their lives, the BP Gulf disaster which killed their own workers and destroyed an ecosystem and the "fracking" techniques used in the search for natural gas that has been linked to poisoned water sources, cancer deaths and possibly even earthquakes, all of which exploration companies were exempted from environmental laws under the Bush Administration. This doesn't even take into account how the blind eye of regulators allowed financial speculators to cause the biggest financial crisis since the Great Depression and a housing bubble that sparked a foreclosure debacle. Just last week, both parties in Congress, led by Sen. Jon Tester, D-Mont., all still doing the bidding of the big banks, sought to delay the huge fees the banks collect on debit card transactions for another two years, weakening already toothless financial reform legislation. Obama's Treasury Secretary Tim Geithner also is rumored to further water down the reform by exempting currency derivatives from transparency requirements in the legislation. Yes, government of the corporations, by the corporations and for the corporations shall not perish from the United States it seems.

In 1911, out of the ashes of the tragedy of the Triangle fire came reforms for workers, first in the state of New York, that laid the groundwork for FDR's New Deal when he became president 22 years later, reforms that politicians backed by rich businessmen seek to dismantle today as we've seen in states such as Wisconsin, Michigan and Ohio with more on the way. 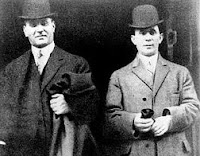 Tovah Feldshuh narrates Triangle: Remembering the Fire and her calm voice serves perfectly as an invisible teacher. The Triangle Shirtwaist Company was one of many businesses associated with the garment industry in the early part of the 20th century in New York. Co-owners Max Blanck and Isaac Harris had hit upon a new trend in ladies' fashion: basically, the blouse. For the first time, women were wearing separate tops just as men did. It made them rich and their company occupied the top three floors of one of downtown Manhattan's newest skyscrapers, the 10-story Asch Building at the corner of Washington Place and Greene Street. The building, now known as the Brown Building and part of the NYU campus, still stands and has been registered a National Historic Landmark and a New York City landmark. 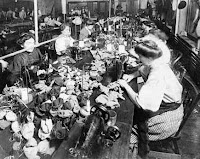 With the huge demand for their product, the Triangle company workers tended to be on the job seven days a week for long hours and little pay and the people willing to be exploited this way did so because they had no other choice. They tended to be newly arrived European immigrants who had been fleeing famine and persecution. Not only did they not find the American dream in their work situation, most could only find living arrangements in tenements on the lower eastside. In the case of the garment industry, most of these virtual slaves were women, especially young women, some not even teenagers yet. To get as much production going as possible, the ninth floor of the Asch Building had been stacked to capacity with 300 sewing machines, leaving barely any elbow room for the workers inside. About a year and a half before the Triangle fire in November 1909, The International 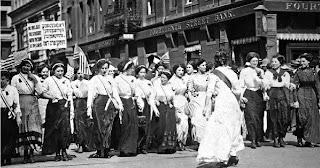 Ladies Garment Union Workers Union staged a massive strike demanding better working conditions for women. The 20,000 female strikers who took to the streets was unprecedented — and this was taking place more than a decade before women had the right to vote in the United States. It really was the first head-on clash between the tycoons of The Gilded Age and their corrupt political minions ensconced in Tammany Hall and the growing progressive movement. The strikers may have been women, but it didn't prevent Tammany from sending out police and hired thugs to arrest them and get rough. By the time the strike ended, the workers at Triangle returned to their sewing machines without any union recognition.

As we see today when the gap between what company CEOs make and the wages given to their average workers have reached startling disparities, similar differences existed at the time between company owners 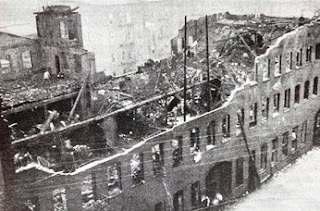 and the average Americans. For example, Triangle co-owner Max Blanck surrounded himself with servants and spent more than $100,000 to renovate his home, quite a contrast when the average American in 1911 only made $300 to $600 a year. Yet Blanck and other company heads didn't want to spring for the readily available sprinkler systems for new buildings or follow the recommendation of New York Fire Chief Ed Croker who, after a similarly tragic fire at a Newark, N.J., factory a mere four months before the Triangle fire had killed 25 workers, again mostly women, had suggested that buildings routinely practice fire drills. Company owners, always focusing on the bottom line, felt drills would affect work productivity and since no government regulations existed to enforce the sprinklers or the drills, they had no one twisting their arms to do the right thing.

What's so compelling about Triangle: Remembering the Fire is not just recounting all that missteps that led to the tragedy and can anger you a century later even when the event occurred long before you were born, but also the interviews with people related to both survivors and victims of the blaze. The filmmakers interview Suzanne Pred Bass who had two great-aunts who were in the fire, one who survived, one who didn't, presumably because they lost sight of each other in the smoke that quickly enveloped the ninth floor. 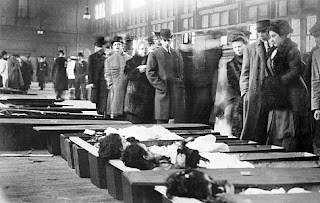 The cause of the fire has never been clear, but most believe a still-burning cigarette tossed into a trash can on the eighth floor quickly consumed the three floors. The switchboard operator on eight notified the 10th floor and the fire department immediately but in her haste, forgot to tell the ninth floor. Though the documentary doesn't confirm it as fact or legend, the story goes that of the two fire escapes on the ninth floor, they kept one locked so that when workers left for the day, they could be searched to make certain that they weren't stealing anything. Those who did survive from the ninth did so thanks to the heroics of elevator operator Joseph Zito who kept overloading his vehicle to get as many out as he could until it finally collapsed

under the weight of the panicked who leaped down the elevator shaft to escape the flames. Most of the people on 10 were able to flee thanks to people in a neighboring building who got ladders across the space between the two buildings. Even though the fire department arrived two minutes after receiving the call, once they got to the Asch Building, the ladder trucks only reached to the sixth floor. Many of those who died were killed jumping to their deaths. At first, some bystanders thought they were tossing bundles of clothes out the windows to save them until they spotted the legs, arms and faces beneath them. Some hit the pavement so hard they crashed through glass plates on the sidewalk. In all, 146 died, 129 women and girls and 17 men. The blaze consumed all three floors in just 18 minutes from the time the blaze started and that 18 minute mark was when the last body hit the ground. Of the 146 deaths, 90 leaped to escape the flames. The horror of what happened led Al Smith, a Democrat thick in Tammany Hall politics who would later lose the presidency to Herbert Hoover, to shake off the cronyism and lead the fight for reforms. New York led the way for proper workweeks and pay and, most importantly, safety conditions for its citizens. It even began to set up a pension system for those too old to work any longer, all ideas that Franklin Roosevelt would bring nationwide in the New Deal. The tragedy showed the need for strong unions and for the government to be for the people, not the corporations, and it is frightening to see the backpedaling that is happening today. Blanck and Harris eventually did face criminal charges for the deaths of their workers, but they were acquitted by an all-male jury and since they had lots of insurance, the fire didn't do much damage to them at all. Because many of the bodies were charred so badly, six couldn't be positively identified but in a separate feature, Triangle: The Unidentified, available only on HBO OnDemand, co-producer and historian Michael Hirsch uses research and genealogical techniques unavailable 100 years ago to give names for the first time to those resting in a mass grave in the Evergreen Cemetery in Brooklyn so now when the names of the dead are ready every year, those unidentified six can now join the other 140.

Triangle: Remembering the Fire premieres tonight at 9 p.m. EDT and PDT/8 p.m CDT. You owe it to yourself to watch.