Words Get in the Way 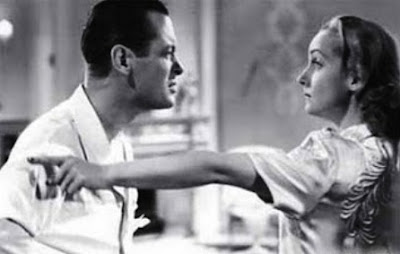 By VenetianBlond
Alfred Hitchcock directed a screwball comedy. Yes, it takes a moment to sink in. Although Hitch infused all of his films with touches of humor, Mr. and Mrs. Smith, released this day 75 years ago, was his only full-on comedic effort. Some sources indicate that he only did it as a favor to his good friend Carole Lombard, who starred with Robert Montgomery. Another angle has it that he pursued the project at RKO on his own. Whatever the reason, the film stands out not for its laughs but for its singularity.

Mr. and Mrs. Smith have a unique way of solving their marital problems. After a tiff, they remain sequestered in their bedroom for days until they kiss and make up. During one of their post-argument breakfasts, Ann asks her husband if he would marry her all over again. Contrary to centuries of battle-of-the-sexes wisdom, David decides to be honest, and says no. It’s not that he does not love Ann, it’s more that being single is just more fun than being married. Not long thereafter, a representative from the county in which they were married comes to tell them that due to a redistricting snafu, it wasn’t legal. Ann takes the opportunity to trim the deadwood, and David spends the rest of the film trying to win her back. 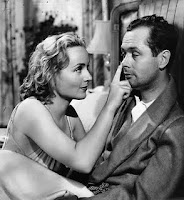 Hitchcock’s Rebecca had won the best picture Oscar in 1940, and he followed up Mr. and Mrs. Smith with Suspicion. The parts of the comedy that work best are the ones least script dependent — those that show the director in full control of the film through the images. When Ann and David decide to go to one of their favorite restaurants from early in their relationship, they find it greatly changed into a dive. They convince the proprietor to set a table outside, like it used to be, but they find themselves surrounded by staring street urchins. Ann suggests they stare back, to teach the children a lesson. One cut later, Ann and David are back inside. Another scene has the separated Ann and David each with other people at a club. David’s date is not as attractive as the woman sitting on his other side, so he pretends to chat up the beautiful woman by moving his mouth without making a sound. Unfortunately for David, Ann notices the ruse, and so does the beautiful woman’s date. Not only does David come off as rude, he looks like a total lunatic.

Norman Krasna, the screenwriter, manages to get in a few zingers, like when David goes to find Ann at her new job and tells the floor manager, “I’m looking for something in ladies’ lingerie.” Unfortunately though, audiences had already been introduced to His Girl Friday the previous year (What a year in film, 1940!) and Mr. and Mrs. Smith suffers by comparison. It takes a full half hour to even get to the inciting incident and longer than that to unleash the mayhem. 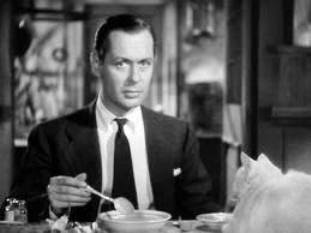 Although Lombard had already been dubbed “The Queen of Screwball Comedy,” she cannot rise above the script she was given because the role gives her little to do other than be angry at David. To make an unfair comparison, Barbara Stanwyck would blow audiences’ hair back with a good script in The Lady Eve one month later. Montgomery fares slightly better. For example, worried about the food in the now shady restaurant, he states, “I’d give five dollars to see that cat take a sip of that soup.” The nebbish county worker, played by Charles Halton, who travels to New York to give the Smiths their bad news (and return their $2 marriage license fee) fares best of all, but he only has one scene.

If some films are “too much of a muchness,” Mr. and Mrs Smith is “not enough of an enoughness.” Not the exemplar of a genre, not a showcase for any standout performance, not the director’s best work, it’s only interesting because it’s Alfred Hitchcock’s one screwball comedy. Even so, Hitch has a way of getting the individual moment right. David is locked out by Ann and forced to retreat to his men’s club for the night. Later we see how bad the situation has become when a room key at the club’s front desk has “David Smith” typed above it. In the hands of a master, sometimes the words get in the way.