A man of flesh, not marble 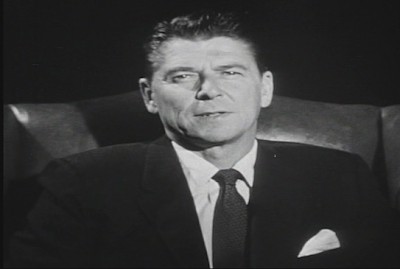 "In the traditional motion picture story, the villains are usually defeated, the ending is usually a happy one. I can make no so such promise for the picture you are about to watch."
Ronald Reagan introducing an episode of The General Electric Theater
By Edward Copeland
That clip opens Reagan, writer-director Eugene Jarecki's new documentary about the life of Ronald Reagan, who would have turned 100 today, that premieres Monday night on HBO. It's hard to compress the story of such a larger-than-life figure full of many chapters in his life and contradictions in his personal character into less than two hours, but Jarecki gives it the old college try.

Jarecki, who made the great 2006 documentary Why We Fight? which took President Eisenhower's farewell address about the military industrial complex as a starting point to look at America's military adventures since World War II, tries to tell Reagan's story from birth to death at the same time he interviews fans and critics about the impact his policies as president had on the U.S.

It's a bit of a juggling act to pull off in its allotted time and while what Jarecki presents is watchable, it's hardly insightful or groundbreaking. I can't help feeling as if this should have been conceived as two parts, one focusing on the biographical side, the other solely dealing with his presidency and debating its aftermath. Of course, that approach also would prove problematic since the life story of Ronald Reagan intermingled so much with his political transformation from a New Deal Democrat to a conservative Republican.

It also doesn't help when you have a subject who lived the majority of his life in the public eye to find anything new to tell about him. Most of us have heard many of these details before so another look at the man and the myth really needed a fresh take to distinguish itself from the massive amount of works in all media that already exist and will certainly proliferate in this, his centennial year.

Still, Reagan contains some nice touches, such as an early montage of politicians, talking heads and even one cartoon character repeatedly saying his last name until it's just a cacophony of noise on a quartered-screen that ends with Jon Stewart shrieking in agony. It leads into discussing Grover Norquist's role as head of The Reagan Legacy Foundation, whose goal is to name something significant in every state and every U.S. county after the late former president. Jarecki even includes a clip of The Simpsons where they have a meeting of The Republican Party (headed by Mr. Burns, of course) discussing the progress of re-naming things after him including the Mississippi River being changed to the Mississippi Reagan and Count Dracula announcing that his friend Frankenstein will now be known as Frankenreagan.

The effort to practically deify Reagan proves galling to some, such as his official biographer Edmund Morris, who says he was a man made of flesh, not marble. "He was not a god," Morris said, no matter how much the conservative movement would like to co-opt him as one, even though in a recent conservative "purity test," Reagan wouldn't even have passed having given amnesty to illegal immigrants and raised taxes several times during his presidency, among other issues that have taken his Republican Party even farther to the right than Reagan was himself. "My father was smarter and better than many people on the left think he was," his son Ron says, "and he was less the giant that many people on the right think he was." Surprisingly, though it does mention what an important influence Nancy was, no mention is made of her split from much of the current GOP over the issue of stem cell research.

Any documentary filmmaker would find it hard to get at the core of who Ronald Reagan really was because. as is repeated often in Jarecki's film, he really wasn't close to anyone except Nancy and she is not interviewed for the documentary. Both his living sons talk, but neither give much insight and his living daughter, Patti, is noticeable in her absence. So instead we're left with boosters and critics to give their takes on the man.

The most interesting section details Reagan's evolution from liberal Democrat to conservative Republican, but it really was his fervent anti-communism that led him to the right. When he served as president of the Screen Actors Guild beginning in 1947, he still fervently backed the Democrats and the New Deal, since FDR's program helped his family survive during the Great Depression, and even campaigned for Truman. Ron Reagan admits that it still mystifies him that since the New Deal helped his family so much during the Depression that he became so stringently anti-welfare as president.

However, in the same era as his SAG presidency, a particularly long and ugly actors strike took place and at one meeting, he heard a screenwriter say that he preferred the Soviet Constitution to the U.S. Constitution. The shock of that particularly stupid statement made him believe communism could be a real threat to the United States and began his turn to the right. When it came time for the House Un-American Activities Committee hearings, he was viewed as a hero for refusing to name names publicly, though papers later revealed that he secretly was an informant for the FBI. 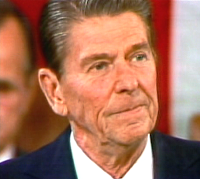 What really turned Reagan toward politics was when he became spokesman for General Electric as host of the corporation's television program. As part of his duties, he toured the country, giving speeches. Though he was supposed to be touting GE products, he inevitably started talking more politically. GE eventually told him to stop and when he didn't, they fired him. Then, in 1964 he made a speech for Barry Goldwater that excited conservative activists who saw him as a more palatable version of Goldwater. Two years later, he was elected governor of California and in 1968 he made the first of his three runs for the GOP presidential nomination. As they say, the third time's the charm. When he won in 1980, many still feared him as an extremist but the assassination attempt on him just two months after he took office sealed a bond between him and much of the country, leading to his 1984 re-election landslide.

As the documentary shows, he was an anti-communist before he was a politician and the full party switch didn't come until the turmoil of the 1960s, when a lot of New Deal Democrats felt puzzled by the chaos around them. (A common refrain was that he didn't leave the Democratic Party, it left him.) One clip shows him commenting on a protester with a sign that read "Make Love Not War" and responding that it didn't look as if the man were capable of doing either. I might not agree with his stance, but it is a funny line. Again, most of the details aren't exactly new. One anecdote that I hadn't heard before was that when Reagan as president proposed the "Star Wars" or Strategic Defense Initiative, a spaced-based laser designed to knock down incoming missiles, Reagan might have been inspired by a movie he made in 1940 called Murder in the Air.

It takes so much of the film's time to get Reagan to the White House, it's difficult to really give those years the comprehensive look that they need, though it does make the point that it began the largest transfer of wealth to richest 2% of Americans in history that continues until today. As MIT economist Simon Johnson says, it was called trickle-down economics, not flood-down economics, for a reason and that's why the middle class got squeezed. It also points out other low points such as the U.S. becoming a debtor nation during his presidency for the first time since World War I and that with his huge increase in military spending, we were spending about $34 million an hour on the Pentagon.

The film does relay one touching moment near the end when Reagan, in the throes of Alzheimer's, returned home from his office and Nancy noticed him clutching something in his hand and that it was wet. She finally got him to show it to her and saw that it was a model of the White House that was in the office fish tank. She asked him what he was doing with that and he told her that he didn't know, but he thought it represented a place that was important to him.

Reagan isn't bad, it's just that its topic proves too overwhelming to cover adequately in less than two hours and it lacks a unique take on its subject to make up for what we've heard before. It's just not distinctive enough to stand out from other works about a figure full of so many contradictions and who so many love and hate with equal passion. Reagan premieres Monday on HBO at 9 p.m. Eastern/8 p.m. Central and runs about an hour and 45 minutes.

Comments:
Nice coverage on a man of principle. I don't think he was made of marble and I understand how the left looks at the right in their efforts to deify Reagan.

At least Reagan, as you put it, is hard to cover in two hours because of the length of his life. How many books and magazines out there on Obama?

I think he did great things for the country during his time and I've come to appreciate him in a way I never did while he was in office.

I wouldn't say he was a man of contradictions as much as he was a man who changed with time. We all change and our world views change. While in office I felt he was fairly steady in his principles.

I certainly have more respect for him that our current President of contradictions, but who knows maybe that will change too.

Anyway, good to see someone out there covering a topic, while seemingly innocuous, is always a lightning rod.

Wonderful review, Ed. I look forward to this HBO doc. Thanks.

You have to wonder what Jarecki's point was. He attempts to point out what he considers contradictions between how people view Reagan and what he was. Except some of his examples are only contradictions to Jarecki himself as they ignore the reality. For instance, deficits. Somehow Jarecki puts that totally on Reagan while never telling the viewer Reagan never had full republican control of the Congress. I mean Jarecki does know Congress controls the purse strings right?

While true, none of his vetoes were ever of a complete budget bill that included those deficits.

"Reagan might have been inspired by a movie he made in 1940 called Murder in the Air."

But what's the actual evidence? (The hopeful dreams of a Reagan Hater don't count.)