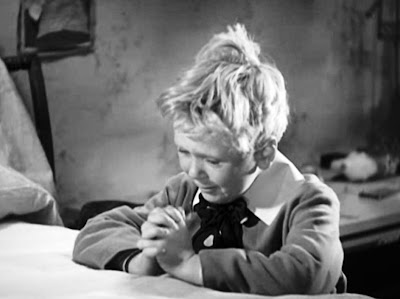 By Edward Copeland
Always looking for copy to fill this blog, I decided to return to a mission I'd neglected for a long time: Trying to see every film ever nominated for the Oscar for best picture. Besides, since the current Academy seems determined to turn the award into a bigger farce than it has ever been, it gives me a good excuse to dive well into the past, since that's where most of the unseen reside. The first nominee that crossed my path: the 1930-31 best picture nominee Skippy, which also earned a best actor nomination for a 7-year-old Jackie Cooper and the best director prize for Norman Taurog. 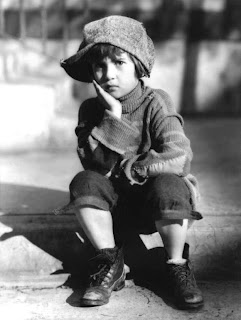 Based on a popular comic strip of the time, Skippy focuses on the misadventures of the title character, the mischievous young son of a well-heeled doctor who heads the board of health. Cooper plays the title character with great charm and easygoing delivery. I'm not sure if he really was one of the top five actors from 1930-31 (remember, there was no supporting division) but Cooper gives a good performance. The story concerns how young Skippy likes to defy his father's orders and play literally on the other side of the tracks, in the poor section of town known as Shantytown. The problem currently plaguing him concerns the adults and some of the kids resent him right now, not just because of Skippy's wealth but because his father has signed an order to level Shantytown and evict its residents for "health concerns." Of course, at first Skippy doesn't believe Dr. Skinner (William Robertson) could be behind such a heartless act, so he either ignores it or fights over it. During one of his jaunts to Shantytown, he makes friends with a new kid he and his gang catch trying to steal the wood that makes up their clubhouse. However, he admires the little spitfire's style and soon they are inseparable. His name is Sooky (Robert Coogan) and he lives alone with his mom (Helen Jerome Eddy) and his beloved dog Penny. One of Sooky's worst fears is that the evil dog catcher (Jack Clifford) might get his hands on Penny because she lacks a license and his family doesn't have the $3 needed for the license.

Despite its age, Skippy holds up pretty well with a mostly light tone despite some sad turns and some real substance as Skippy discovers that his dad isn't quite the man he thinks he is, but given the time this was made, you can trust just about everything will turn out OK. A lot of the dialogue proves particularly sharp, thanks in no small part to a script that was co-written by Joseph L. Mankiewicz.

I can't say with certainty that Taurog's win for direction was deserved, but there is at least one shot that, while pretty common today, might have been attention getting in 1931. As the Sterling parents repeatedly call Skippy down to breakfast, we hear his voice from upstairs asking his mother about which clothes to wear and the location of certain items. The camera travels in one unbroken move from the parents at the dining table, up the staircase, turns the corner of the hall and continues to the end where it enters Skippy's bedroom, where it finds the boy delivering the lines while still in his bedclothes, tossing and turning, not having even left his bed yet. The entire sequence, which comes right near the beginning of the film, earns the film affection from the get-go.

Comments:
I saw this on Netflix streaming a couple of months ago. Not bad. But I would have still given the Oscar to Joe Sternberg.

Thanks for this. That panning shot you describe would have been very difficult. I remember Hitchcock doing something similar in one of his last films, FRENZY. Even with a demo of how he did it, it looked daunting. I'm going to have to look for it on netflix. You've got me really curious.