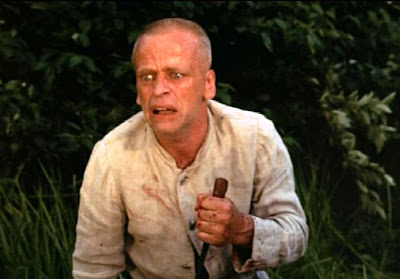 By Edward Copeland
Werner Herzog mentions (and I've watched and listened to so much Herzog of late, I'm ashamed to admit I can't pinpoint exactly where) that he and Klaus Kinski filmed Woyzeck quickly after they finished their work on Nosferatu. Alas, the speed and the fact that it is based on an unfinished play shows. Thankfully, Kinski's performance makes it worth watching, even though it doesn't come close to matching his other collaborations with Herzog.

Kinski plays Franz Woyzeck, an unstable military private, trained as a rifleman but used mostly as a barber, haunted by voices in his head. He's also the subject of experimentation by a doctor who for a year has allowed him to eat nothing but peas in some cockeyed plan to see if he can turn a man into a donkey.

Woyzeck also has a young wife (Eva Mattes) and child, only his wife can't bear his touch or his obvious madness and barely keeps secret from him her affairs. As her lover and others taunt Woyzeck, his madness grows greater.

The problem with the film is that Woyzeck starts nuts and he really doesn't have anywhere to go. You figure he's going to snap in some way and the dialogue gives you clues like big flashing lights as to what will happen.

It's fortunately a very short film. Kinski's decision to pull his performance in instead of chewing the scenery with madness is the best decision made in the film, but Woyzeck overall is forgettable.