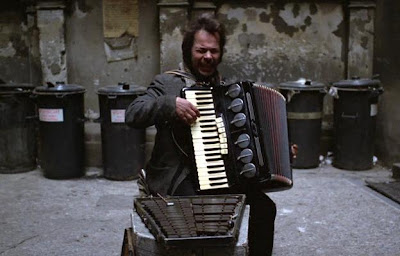 By Edward Copeland
If you describe in detail the bare bones of the plot of Werner Herzog's 1977 film Stroszek, the movie sounds quite depressing. However, Herzog spins his story in such a whimsical way, it's hard not to smile most of the way through its bittersweet tale.

While there really is not a documentary feel about Stroszek, that line is blurred since the three main characters are all played by real people loosely based on themselves. The title character, Bruno Stroszek (Bruno S.), is an alcoholic who has spent most of his life in Berlin in halfway houses, jails and reform schools and is getting yet another chance at life on the outside as the film opens.

He's quiet with a somewhat sweet demeanor and musical desires that play out on the piano in his apartment or the accordion he takes to the town square for spare change. He takes in a prostitute named Eva (Eva Mattes), who leads poor Stroszek on a great deal of the time while bringing in most of the cash. Bruno's other friend is an elderly man named Scheitz (Clemens Scheitz), always a hair trigger away from a rant about the secret police and other conspiracies, who cared for Bruno's things while he was away.

As Bruno and Eva continue to be harassed by a couple of street pimps, the trio hit upon the idea of leaving Berlin to go far away, really far away, to Wisconsin in the United States, where Scheitz says his nephew has invited him to live and offers them job opportunities.

Stroszek is a one-of-a-kind type of film, where you're never quite sure where it's going because plot seems completely extraneous to observation and moments such as dancing chickens that seem out of the blue prove riveting. It's unlike most Herzog films, but it's a wonder to behold.

Comments:
It's a terrific film, reminiscent of the best of Jarmusch. I remain fascinated by Herzog's fear and loathing of chickens, which show up in both Dwarves and here in Stroszek. He sees them as the embodiment of stupidity and evil, and anyone who has spent time around chickens would be hard pressed to argue the point.

I also understand that Errol Morris has been ever-peeved that Herzog made this film in his (Morris's) backyard, stealing material that he assumed was his province. Of course it is all a tempest in a tea pot, as the two remain fast friends despite this.

He even threw the chickens into Signs of Life, showing how to hypnotize them, which he discussed on the commentary for DWARFS, though he referred to that scene being in the ENIGMA OF KASPAR HAUSER. I don't know if he got confused since I haven't seen KASPAR HAUSER or if he did the scene in both.