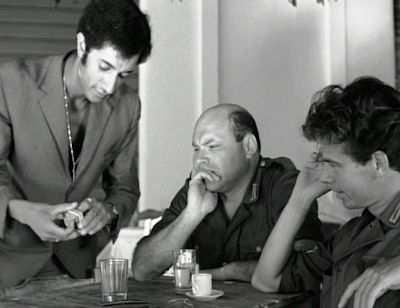 By Edward Copeland
Signs of Life was Werner Herzog's first feature-length film as a writer-director, though it never received a release in the U.S. until 1981. Still, this 1968 film bears many of the themes that will recur throughout Herzog's body of work and does so with humor and a nice character study as a pseudo-oasis for a recuperating soldier during World War II becomes suffocating for the soldier, both as a warrior and as a man.

Peter Brogle stars as Stroszek (no relation to the title character of the later Herzog film), a soldier whose severe injury earns him cushy duty with two other soldiers, as well as his wife, guarding an ammunition supply on a Greek isle.

As his injuries heal, Stroszek grows restless and feels that he's not doing his military duty in these plush environs where enemies are nonexistent. His comrades (Wolfgang Reichmann, Wolfgang von Ungern-Sternberg) really offer little help with their drinking and bitching and one's obsession with insect infestation. Even the unusual perk of having his lovely wife Nora (Athina Zacharopoulou) present brings Stroszek little comfort.

As time marches on, Stroszek unravels, eventually becoming a threat to the ammo himself that the Nazi military must deal with in a setting where they saw no resistance whatsoever. Herzog's film builds slowly and doesn't lead to a huge climax, but it always is fascinating with interesting little scenes such as when a the soldiers twice encounter a gypsy and the military commanders try to figure out what to do about their Stroszek problem.

The score by Stavros Xarhakos proves very reminiscent at times of Anton Karas' famous Third Man work. With its nature and madness aspects, Herzog was definitely setting the stage for themes he'd return to time and time again.

Signs of Life is not one of his greatest films, but it is a good one and quite fascinating when viewed in context of his entire career.