The Godfather Part IV: The Farce 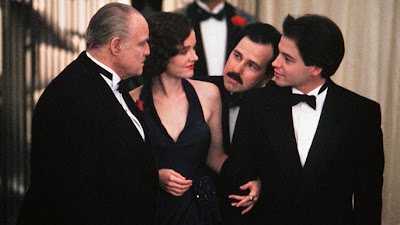 By Ali Arikan
One of the more esoteric behaviors of the male Homo Sapiens is his tendency, within minutes of being in the company of another male, to talk about The Godfather. It’s in our blood, and we can’t help it. Begin the sentence “If Clemenza can figure a way to have a weapon planted there for me,” and someone else will impulsively finish it: “Then I’ll kill ‘em both.” Just say the name Enzo (Gabriele Torrei), and the other person will recall not only his profession, but why he so desperately wanted to stay in NYC. Hum the first few notes from Nino Rota’s Love Theme, and our eyes will glaze over, like Michael’s (Al Pacino) in the third film, as he remembers his darling Apollonia (Simonetta Stefanelli), and the cruel fate that befell her and her pert little breasts. Sure, some might say this is not unique, and that Star Wars, This Is Spinal Tap and Jaws also inspire the same reaction. But The Godfather is different: in its unabashedly romantic portrayal of the most despicable form of capitalism, it speaks to men’s basest instincts: it’s OK to be a manipulative murderer as long as you’re loyal, a terribly uncomfortable and totally unflinching theme. We quote it, we mimic it, we laugh at it; and maybe we do so because of these qualities. The Godfather (the first film; though to a lesser extent the second, and the least the third) is the ultimate male wish-fulfillment fantasy: great power and no responsibility. It’s cinematic masturbation. 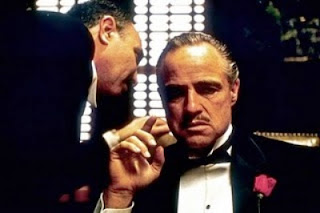 managed to do this was, of course, through incredibly vivid characters (I might eat crow about this, but one of the reasons why I predict Avatar will all but disappear from the public consciousness in, say, 20 years is because it does not have one single interesting character). Even though the film’s cast had already enjoyed, or would soon achieve, varying degrees of greatness and fame, they became one and the same as the parts they played, which would stand apart from all the other characters in their filmographies. I like this observation by Roger Ebert: “All of the…roles are so successfully filled that a strange thing happened as I watched this restored 1997 version: Familiar as I am with Robert Duvall, when he first appeared on the screen I found myself thinking, ‘There's Tom Hagen.’” Ebert’s observation was perhaps most true of Marlon Brando as Don Vito Corleone. Of course, Brando arguably is the greatest of all screen actors, and between sweating through the Vietnam War and finding ever more ingenious ways of using butter, the ‘70s were probably the last decade in which his genius was allowed to fly free. Of course, if one felt inclined to stretch the metaphor, it was in the ‘70s that he soared so close to perfection that his hubris got the best of him in the ensuing decades, when he acted, and was perceived as, a parody of his former self. So, when Andrew Bergman approached him in the late ‘80s to reprise his most mannered performance in a spoof of The Godfather, he leapt at the chance to star in The Freshman as aging mobster Carmine Sabatini (a tip of the hat, surely, to Carmine Coppola).

After The Freshman, 20 years old today, was finished, Brando famously denounced it, and then, a week later, retracted his statement. In hindsight, you could see that he was fucking with us, and that it was a part of his performance. Or he was batshit insane, which is an explanation I can also live with. There are two main 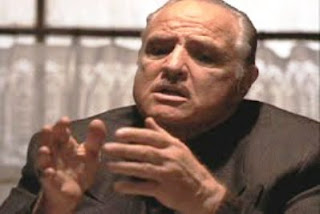 reasons why The Freshman works as well today as it did when it first came out, if not better: one major, the other minor. The first is, obviously, Brando, and his unrepentant self-mockery. In his eyes is the joy of revisiting an old character he relished, as well as the childish and naughty sense of fun. Brando was a true radical, and lampooning, arguably, his most famous character was right up his alley. Brando does not just stuff his face with Kleenex and lower his voice. Instead, he walks a very fine line between loving mimicry and grotesque travesty. At least 40 pounds heavier here than he was during The Godfather, he still has a bizarre grace, and, watching the film for the first time since Brando passed away, I found the infamous ice-skating scene terribly touching. These days, we laugh at him more than we appreciate his amazing talent, but, every now and then, it’s better to sit back and realize that, even in a film as fluffy as this, if he wanted to, the old man could bring it. 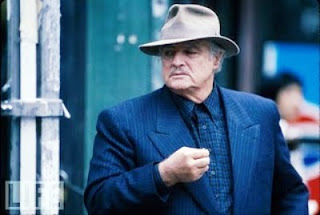 In fact, Marlon Brando doesn’t just ape Vito Corleone, he also pays homage to his own performance in The Godfather. When he is first introduced to Matthew Broderick’s character, Clark Kellogg, watch as Carmine says: “Just like the cereal.” Brando’s delivery is virtually the same as his “…read the funny papers” line in the garden from the earlier film. When he asks Clark to come to his house, the way he phrases the invitation and puts his arms round him is identical to a similar scene with the Godfather and Johnny Fontaine (Al Martino). Even the flickity-flick face scratch makes it in! These are all minor touches, sure, but they complete the illusion. This is arguably the very last film (apart from, perhaps, 1994’s Don Juan de Marco) where Brando doesn’t go through the motions.

The second reason is Bergman’s direction. Working from his own script, he fashions a wonderful sense of the world of The Godfather, and the film is always evocative, and never derivative. William A. Fraker’s cinematography and David Newman’s score pay tribute to Gordon Willis and Nino Rota and Carmine Coppola’s work respectively. Bergman has a solid cast (the late Paul Benedict is especially wonderful as an acerbic film professor), and what elevates the film from being a feature-length proto-Funny and Die sketch (aside: is it me or is pretty much everything on that site, what’s the word, shit?) is the masterful way Bergman’s direction weaves them into a fish-out-of-water comedy. 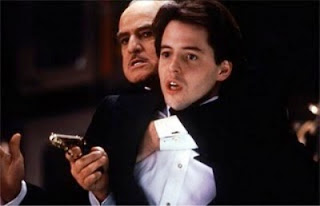 But that’s a pleasant side order next to the glorious main dish that is Brando’s performance (if I can’t use a food metaphor when talking about Brando, then the terrorists have already won). Both Marlon Brando and Don Vito Corleone have become such a huge part of the cultural establishment that it is impossible to imagine cinema, or, indeed, culture, without them. When he first walks into the working men’s club that Carmine uses as his office, Clark notices a portrait of Mussolini hanging on the wall. “The older ones like to have it up there for nostalgia,” Carmine says. “To remember the old times, the good and the bad.” The camera stays behind him and we see the portrait in the far back. On Sabatini’s desk, facing him, is a figurine of Dante Alighieri. In a single shot, we see one of history's most infamous dictators, one of its greatest poets, and one of its most celebrated actors. Don Corleone embodies everything they represent, mindless destruction and timeless art, and that's why he endures, even in the wake of such caustic parody. This is our culture. The good and the bad. 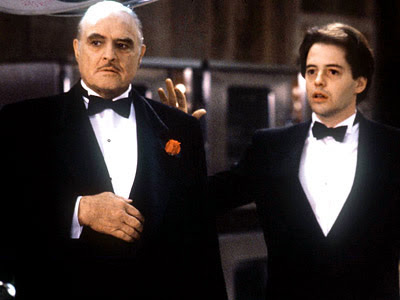 Yeah, very sad. Kirby was an amazing actor, and his work here, as the young Clemenza in Part II, in "This is Spinal Tap," and even "City Slickers" are all a testament to his amazing, undersung, talent.

I wanted to talk about him, but "The Freshman" is a Brando vehicle. Maybe when I revisit "Tap."

BTW, pay special attention to the balcony scene where Kirby recreates Sonny's fist-bite from "The Godfather."

I loved Maximilian Schell as Carmine's eccentric chef/zookeeper and you can never go wrong with a film that has Bert Parks singing Dylan's "Maggie's Farm." Of course, you did forget one other fun little Brando self-referential moment: at the end, when he's taking the Komodo dragon for a walk and tells it "You could have been somebody...you could have been a...handbag."

I still remember with great fondness the first time I saw The Freshman in the theatre; both my sister Kat and I went and while normally our shared tastes in films are as different as night and day we both enjoyed this one from start to finish. We hadn't laughed that hard since seeing The In-Laws, which, not ironically, was also written by Bergman.

"Will the owner of the reptile please report to the information booth..."

"Carmine said one boy now there are two." hah! I love Maximilian Schell in this film. It's a small role but he makes the most of it and you never forget his character. "Mein Herz schwebt in Blut! That means 'My Heart Swims In Blood'."

And yeah, I certainly give props to the late-great Bruno Kirby for turning in a wonderful performance that I would rank right up there with his turns in WHEN HARRY MET SALLY and GOOD MORNING, VIETNAM. I love his introduction into the film where his "educates" Clark about how New York City works.

I'm not a huge Penelope Ann Miller fan but she was also very well cast in this film and the scene where she interrupts Clark's film class to take him to see her father is a hoot, demanding he get a better grade!