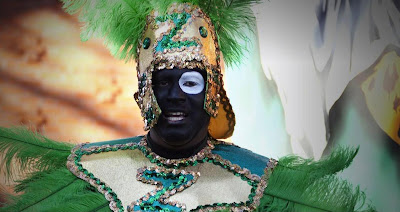 By Edward Copeland
The opening of this episode has the same quick-cut rhythm of the previous one, but this time it serves an obvious and definite purpose: showing what all the characters are up to because it is setting up New Orleans' most important time of the year: Mardi Gras. The pre-credit sequence even includes a Sonny and Annie sequence that I liked for a change. As the trite and melodramatic buskers finish their performance for a crowd, an obviously emotional man thanks them. He explains that he's been living in St. Louis and lost his home in the flood. Three of his neighbors drowned during Katrina, but nothing would keep him keep from coming back for Mardi Gras.

Sadly, one of the people who had worked hardest to gather people back to New Orleans in preparation for Fat Tuesday, Albert Lambeaux, is languishing in jail following his arrest at the projects. His son Delmond has 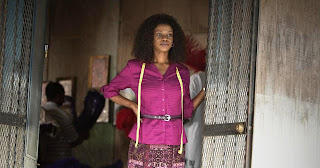 returned to town to help his father, who complains that he hasn't been allowed to make any phone calls for two days and asks Delmond to tell his tribe to keep working for the big day. Later, Delmond receives a call from his father's lawyer with the news that they've moved his father's hearing to Wednesday: They want to send a message and really punish the chief by keeping him locked up for Mardi Gras. It also means that Delmond will have to stay in town longer than he intended. He goes to Poke's and tells the Indians the bad news. Lula offers her place for Delmond to stay, but he says he has a place and mentions that he doesn't know why people are wasting so much time and money on Mardi Gras when the city still needs to be rebuilt. Lula looks at him disapprovingly.

Sofia Bernette expresses concern to her mom Toni about her dad as he continues to hole himself up in the guest house, wondering if he's depressed, but her mom assures the girl that Mardi Gras always cheers Creighton up. Eventually, Creighton emerges, declaring that there's a "light at the end of the tunnel" and he's going for a drive. An excited Sofia asks to join him and her father relents. The price is a history lesson of all the landmarks long gone by previous New Orleans tragedies and how it's almost six months to the day since Katrina. He realizes his talk is bringing his daughter down a bit, but the girl had correctly diagnosed her father's mood. There's nothing festive going on. 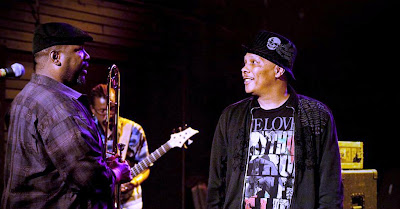 Antoine sets up a gig but informs one of his fellow musicians that he has no intention of working on Mardi Gras this year. It just wouldn't seem right. At the gig, he is reunited with his Japanese benefactor Koichi Toyoma, who has returned to experience Mardi Gras. He explains why he's playing his old trombone instead of the new one Toyoma bought him, but Toyoma says the handing down to the next generation is very Japanese. He also says he heard of Danny's death. Antoine wishes his passing had garnered as much notice locally.

After spending their day together, Janette and Davis part ways and Davis tries to make Mardi Gras plans but Janette plans to work, which Davis insists may be a sin. 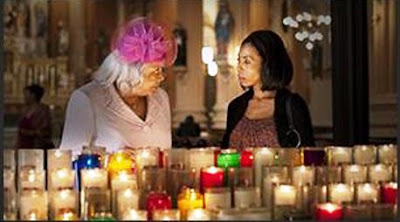 Following a day that included watching her mother light candles at a church for David Brooks, LaDonna keeps mum about her knowledge of his death. Later, she welcomes the arrival of her husband Larry and the boys for the city's big day. 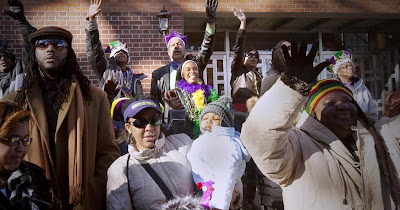 The next day, Mardi Gras arrives. The Bernettes leave their homestead in full costume. Ladonna's family heads out for the parade, though her mom decides to stay behind, promising she might go next year "when everyone is there." Davis' pirate costume would not be complete without keeping that judge's get-out-of-jail 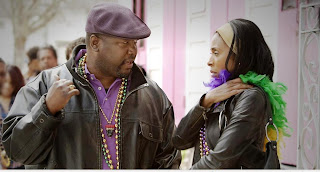 card in his pocket. Albert lies on a jail bunk, straining to look out a window to see if he can see anything at all. Delmond's Mardi Gras skepticism begins to ease as he watches the parade and gets flashed by some pretty marchers. He tosses beads in return. Davis makes a stop at his family's garden party where his mother enjoys poking him with the fact that the pirate he's emulating was a slave trader. It also allows us another all-too-brief appearance by Elizabeth Ashley as his aunt. On the street, LaDonna runs into the assistant district attorney who apologizes, saying she had to represent the city but she's glad the LaDonna won and wishes her luck finding her brother. The Creightons bump into Janette and express sympathy over her restaurant's closing and buy three orders of her gumbo. Later, LaDonna encounters a furious Riley, the roof contractor who ripped her off and ended up getting arrested and handcuffed in front of his kids. Thankfully, Antoine is near and comes to the aid of his ex-wife. Davis hooks up with a solo Annie, also bedecked as a pirate, making her presence more tolerable since she's paired with a character we care about. Sonny has a separate story, but does it matter? Davis spots a favorite sign: FEMA SAYS THE BEADS WILL BE HERE BY APRIL. Creighton's malaise continues and he tells Toni and Sofia to stay and have fun, he's just not feeling it this year.

Once she's exhausted her food supply, it's time for Janette to join the party and she re-emerges on the street dressed as a fairy godmother wielding her wand wherever it will lead, trying to change cars into cabs and forming a small sidewalk sing-a-long line of "Iko."

Following Antoine's rescue of LaDonna, the ex-spouses end up at her tavern where a massage leads to kissing and LaDonna ignoring a cell phone call. When she returns home, she learns that the ignored call was from Larry saying that he and the kids were returning to Baton Rouge.

After picking up a girl at a party, Delmond takes her for a drive and what at first seems like a hallucination turns out to be Mardi Gras Indians. Later, he admits the sight gave him goosebumps and makes him think the city just might make it.

As the clock strikes midnight, Davis tells Annie that the New Orleans Police Department are doing what they do best: crowd control.

A still depressed Creighton records yet another YouTube video, similar to his mood, declaring that everything seems like it's the same yet not the same.


The following day when he gets his dad out of jail, Delmond tells Albert what a great Mardi Gras he had but that come St. Joseph's, his father's Indians will be the best.

Many of the various characters take part in the ritual of Ash Wednesday, including Davis and Annie, though Annie refuses Davis' offer of a joint. She tells him that she's thinking of going back to New York for awhile. "Giving up New Orleans for Lent? Now that's radical," McAlary replies.

Toni finds a passed-out and still-costumed Creighton on the porch next to an empty bottle of bourbon and orders him to get his shit together before their daughter sees him.

Now that Mardi Gras has officially passed, LaDonna takes the action she's been delaying and steps into a funeral director's office. The episode, despite some down moments has a mostly jaunty and joyous feel, particularly after the rare misstep of "Smoke My Peace Pipe." Only two episodes left to go in season one.