The type of pivotal film few write about 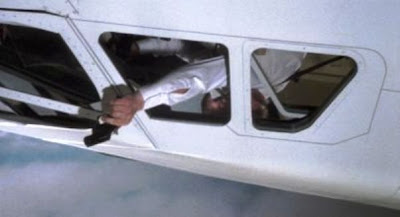 By Edward Copeland
As a movie buff, it's routine to write about the films that wowed you, that left you mesmerized, that powered your love of the medium. However, there is another type of film that doesn't get talked about for its milestone status. At first glance, people would wonder, "Why in the hell is Edward Copeland wasting time marking the 30th anniversary of The Concorde — Airport '79?" Because when I saw that film at the tender age of 10, that's the first time I remember my critical faculties truly being engaged. Sure, I'd disliked movies before that, but The Concorde is the first movie I remember being able to tell people why it was so awful.

As a child of the '70s, it almost was inevitable that my early moviegoing experiences would involve A LOT of disaster films. On top of that, being the son of an air traffic controller, the Airport series also would have particular prominence. The original had good acting and pretty much worked despite its melodramatic tendencies. Its 1975 sequel, with a small plane crashing into the side of a jumbo jet, was nearly a laugh riot, 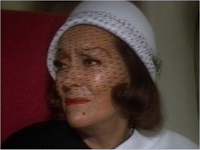 though I couldn't appreciate that until seeing it again years later. In fact, the entire assemblage of passengers should have come with their own drummers to provide rim shots, especially Gloria Swanson playing herself, hurriedly dictating her memoirs. At the time, I actually enjoyed Airport '77, which sent the jumbo jet splashing to the bottom of the ocean because it was so well acted, though even then I questioned why the ocean seemed completely devoid of fish. Still, though each of the first three Airport films had their flaws, each disaster was plausible: man with a bomb, mid-air collision, crash into the ocean. This was not the case with The Concorde. When I had the idea to write this piece, I figured I'd better watch the movie again and not rely on 30-year-old memories. I'd hoped to rent it, but no one rents it. I actually went to to the trouble of buying a DVD set of all four Airport films because it was cheap enough, that I thought it was worth it.

I was surprised how accurate my memories of this atrocity were. Reading about the original critical reaction to Airport '79, apparently critics at the time laughed out loud so much at screenings of the film that the studio tried to change its marketing scheme and pretend that they intended it to be a comedy all along. Of course, the critics weren't laughing with it, they were laughing at it, much like the 1995 crowd of reviewers I was a part of reacted as we sat through the screening of The Scarlet Letter. Ironically, Airplane! was just a year away.

THE MOST INEFFICIENT MURDER PLOT EVER

Susan Blakely more or less stars in the fourth Airport film as the dumbest television investigative reporter in history, and that's saying something. Apparently, she's a legend. So much so that a whistle-blower finds his way to her condo to inform her that the defense contractor that he works for has been selling arms illegally to countries such as Angola, Cuba and other baddies and he can prove it. Unfortunately, his life is in danger, so his wife will give her the papers later. Also, I guess he didn't realize that Blakely was dating and in love with the president of the company (Robert Wagner, who exhibited more believable evil in the Austin Powers films). No sooner does the man get his story out that a gunman walks in behind him and shoots him dead and starts chasing Blakely around her residence. She, of course, hides, in the place he'll never find her: on the roof of her condo's glass greenhouse. Fortunately, a 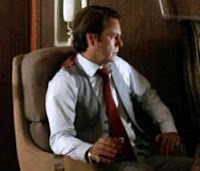 stranger on the street pulls a fire alarm (though personally I've never seen fire alarms on poles on sidewalks, have you?) and the gunman gets scared off. This sure puts poor Wagner in a quandary because Blakely is leaving the next day on a flight on the Concorde to Moscow with a first stop in Paris. He meets her at the airport before she leaves and tries to convince her it's all lies but as she's boarding, the slain man's widow rolls up in a wheelchair with the documents which she takes on the flight. Wagner realizes that there is only one course of action: To keep Blakely from telling what she knows, he must use his weapons systems and any other tricks he knows to bring down the entire Concorde. Fortunately, Blakely has an unexpected ally on board, the only character who connects all four Airport films. Of course, Blakely's relationship with Wagner isn't the only storyline of questionable journalism ethics floating around Airport '79. There is the story of another television reporter (portrayed by John Davidson and his flowing mane of hair) covering the story of a Russian athlete (Andrea Marcovicci) who will be competing in the Moscow Olympics. Oh yeah, they also are having an affair and are secretly engaged. Since the film wasn't aware that President Carter would boycott the 1980 Olympics, not sure whether he would have still covered it since the U.S. team wouldn't be there.

JOE PATRONI TO THE RESCUE
George Kennedy once again plays Joe Patroni, a character who has the most bizarre career trajectory of anyone in a series of films and, perhaps, real life as well. In the original film, he managed ground operations at the airport at the center of the crisis, personally getting out on the runway to try to clear snow and planes from the path of the incoming jet with a hole in the side. By 1975, he somehow was an airlines communications official helping to oversee the press during the fallout of a mid-air collision. In 1977, 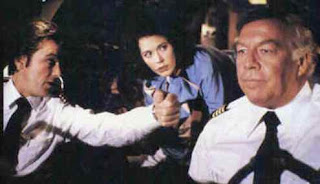 he worked for another airline, offering advice on how to rescue passengers trapped on a submerged jumbo jet. Somehow, two years later, he's now been checked out to be a pilot on another airline's maiden run of their new Concorde jet. Of course, no matter what job you put Patroni in, he's always great in a crisis. So when Wagner's evil corporate titan tells his underlings to reprogram the coordinates on a test of their heat-seeking drones (none of the subordinates bother to ask why) and Patroni realizes that an armed missile has its sights on his plane, he has the bright idea to depressurize the cabin, open the window, fire a flare gun out the window and distract the drone. Shew. Even at 10, I couldn't help but exclaim, "That's really stupid."

When that doesn't work, somehow Wagner uses a connection he has in the French government to send a French fighter after it to fire guided missiles. Patroni outmaneuvers that plot as well. After they land in Paris (where the dumbest reporter in the world once again meets and makes out with the most inept would-be killer in the world), Wagner's henchmen plant an explosive to blow out the cargo hold during flight and disable the landing gear. Why, you may ask, didn't Wagner just have her killed on the ground in Paris? Because that might make sense. Once it blows, they have to make an emergency landing in a snowfield in the Alps. Unfortunately, rescue teams are there almost immediately and we miss the chance of watching them turn cannibalistic and start eating one another for survival.

MORTGAGES MUST BE PAID
Granted, the late '70s were a tough economic time, but is that enough to explain some of the actors who agreed to appear in this calamity? Bibi Andersson, a favorite of Ingmar Bergman, shows up in one sequence to give George Kennedy an unforgettable night of Paris love only to be revealed later as a high-price call girl.

The other captain of the Concorde is Alain Delon, the Tom Ripley of Purple Noon, who is having an affair with a stewardess played by Sylvia Kristel of Emmanuelle fame. Cicely Tyson and Mercedes McCambridge even got roped into small roles. The rest of the ensemble reads like a Love Boat call sheet. Charo has a one scene cameo as a passenger who refuses to fly because they won't let her pet dog sit on her lap. Martha Raye plays a woman with a bladder control problem who is constantly running to the bathroom. Jimmie Walker also uses the bathroom a lot, but that is only to smoke his reefer when he's not playing his saxophone. Avery Schreiber also is aboard with his deaf daughter but, alas, no Doritos. Eddie Albert plays the president of the airline and his wife is none other than Sybil Danning.

WHO WAS RESPONSIBLE?
Now, the actors who agreed to appear in this monstrosity weren't making it up as they went along. Others were responsible and they shouldn't escape culpability. The director was David Lowell Rich, who worked mainly in episodic television and who really can't be blamed beyond agreeing to helm this mess.

The real culprits go to the people who came up with the story and the screenplay. The story was credited to the late producer (including of this film) Jennings Lang. According to IMDb trivia, another producer, Walter Wanger, served six months in prison after he shot Lang in the groin because he believed Lang was sleeping with his wife, though that's not what killed Lang. This really has nothing to do with The Concorde — Airport '79, I'd just thought I'd toss it in.

The screenwriter, however, has risen to a revered place in Hollywood. He's since been nominated for four Academy Awards and won once. He's also lost a fortune in the Bernie Madoff scam. Yes, Eric Roth, screenwriter of Forrest Gump, The Insider, Munich and The Curious Case of Benjamin Button, came up with the words for Airport '79. I wonder if it's still on his resume. Among the gems of dialogue, which were just as bad as the plot, was this exchange between Kristel and Kennedy.

Kristel: You pilots are such... men.
Kennedy: Well, they don't call it a cockpit for nothing.

Too often I think people who aren't movie buffs confuse criticism with snobbery and I can see how it can come off like that and in some cases probably is that, but it really is an inevitable side effect of being in love with the artform. The more you love movies, the more movies you want to see and the more that you see, the higher your standards will grow. A person who only sees 20 films or so a year will never be able to relate the quality of films to one another in the same way that someone who sees 200 films a year does. When you multiply that over decades, the standards gap grows wider and if some don't even consider looking at films that are older, that expanse grows huge. So, much in the way they say good can't exist without evil, great films can't exist without worthless trash such as The Concorde — Airport '79.

Comments:
Well done. What a nice piece on a truly awful movie.

This is great, Ed. I think my "first time" I was aware of a movie's awfulness was a disaster film, made around the same time, called "Earth's Final Fury." It starred Paul Newman (for Pete's sake) and a typical cast of stars sleepwalking through a dumb plot about an active volcano. I distinctly recall a walk-over-the-rickety-bridge scene that seemed to last four hours.

I watched this a few years back to get a laugh and it worked like a charm for that effect. The shooting of the flair, the loop-d-loop, THE John Davidson(!), it was just hilarious.