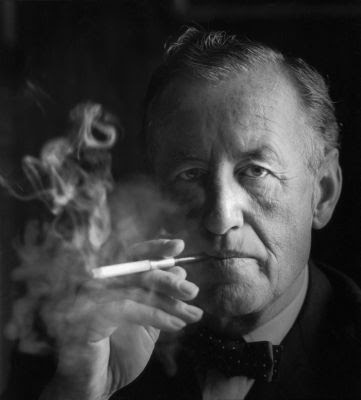 By Jeffrey Hill
While Ian Fleming certainly didn’t create the spy novel — he did create its greatest, most well-known secret agent of all time. Fleming's novels sit atop the genre at its popular height during the Cold War. The films, of course, were even more popular. With the mania surrounding James Bond it is pretty much impossible to look at Ian Fleming on his centennial anniversary without the prism of 007. Fortunately, since Bond is a reflection of his creator, it can only do Ian Fleming honor that we dwell on his masterwork.

Ian Fleming's life would have been noteworthy even without the Bond books. He was the son of Valentine Fleming, a banker and a parliament member who, during the Great War, died a hero in France (Valentine's friend, Winston Churchill, wrote an appreciation of the man for The Times). Ian's older brother, Peter Fleming, was a famous adventurer and notable travel writer in his own right. 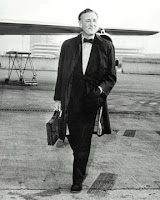 At an early age, Ian Fleming appreciated adventure stories by writers such as Sax Rohmer and Robert Louis Stevenson. Though considered eccentric as a boy, Fleming was athletic and something of a ladies man. There was a stubborn rebellious streak in him as well. While going to school at Eton, he routinely found himself in trouble. One time, he had an appointment at noon with the schoolmaster to receive a caning for some trouble he'd caused. He also was slated to participate in a race at noon that same day so he convinced the schoolmaster to bump the caning up to 11:45 so that he could still compete in the race. Despite a bleeding back, he managed to place second. While at Eton, Ian later earned the title Victor Ludorum in track and field. This athleticism later found its way in describing Bond's school time exploits (where Ian described Bond as being particularly good at fighting sports and wrestling).

Later, Fleming attended the Royal Military College at Sandhurst, where his womanizing still caused him trouble, but where he nevertheless did well. When offered a commission, Fleming rejected it (supposedly because he disagreed with the push of the military to become "mechanized") by sending a refusal via a postcard and leaving the school.

In 1927, his mother sent him to a school in Kitzbuhel, Austria — a chateau high in the mountains — to learn German and French. It was here that Fleming became an avid skier and mountain climber — two elements that figured prominently in the Bond novels. After a brief stay in Munich, where Fleming studied Russian, he enrolled into the University of Genova to continue studying French. There he became engaged to a Swiss girl named Monique (the same nationality and name of James Bond's mother), but Fleming's mom, who controlled the inheritance, disapproved of the engagement and forced Ian to break it off.

In 1931, Fleming took and failed the Foreign Office Exam, which was a blow to his ego. His mother helped him get a job with Reuters, and Ian showed promise as a reporter quickly earning a reputation as an enterprising journalist while covering a trial in Moscow of some British citizens caught up in Stalin's purges. Before the anticipated court decision, Fleming had written two stories — one for either possible outcome — then upon the announcement, he dropped the appropriate story out of the the courthouse window to a runner below who then took it immediately to the office where it was wired to the paper — so that his story would get out first. This operation required schmoozing with Soviet censors to get prior approval to both stories, but it worked out well. 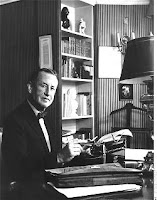 Nevertheless, when Reuters offered Fleming a position as general manager of their Far East office, he surprised everyone by quitting and becoming a junior partner with a stock brokerage firm. During this time in London, Fleming led an excessive bachelors' life, maintaining noncommittal romances with numerous women (not unlike Bond) and forming a gentleman's club called Le Cercle, where he and his friends ate nice meals and played bridge. He even privately published a book of poems called The Black Daffodil. (He later destroyed all the known copies of this book.)

At the dawn of WWII, Fleming became the personal assistant to the Director of Naval Intelligence, Rear Admiral John Godfrey. Fleming's activities during the war, while never in combat, provided infinite fodder for the Bond books. He was adept at organization — helping orchestrate the evacuation of Bordeaux, while there, and later offering input to the Americans while they were trying to form their own intelligence agency. Fleming later drew up a plan of action regarding Gibraltar in the event that the Spain joined Germany and tried to seize it. In late 1941, Fleming organized Number 30 Assault Unit — a group of intelligence commandos who specialized in looting Nazi hideouts as they were discovered.

During the war, Fleming took several trips to the U.S. and visited Jamaica for the first time. In the summer of 1941, while in New York, he accompanied a British agent, William Donovan, in breaking into a Japanese office at Rockefeller Plaza to find some recent Japanese government transmissions. This activity was later used to describe Bond's first job as an assassin. In 1944, he took a trip down the Florida peninsula and to the Caribbean which provided fodder for a similar train trip in Live and Let Die. One of his American friends, Ernest Cuneo, was one of the inspirations for Bond's American friend, Felix Leiter. In short, much of Fleming's biography from this period formed the base material for Bond's world. 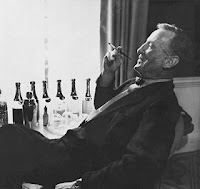 After the war, Fleming took a job as Foreign Manager at Kensley Newspapers. This position allowed him to travel a lot and begin building at Goldeneye, his Jamaican retreat (and later retirement home). In the late '40s, he also met his future wife, Anne Rothermere. Anne, who had already been married twice, was a socialite, much like Fleming, and was friends with a variety of literary heavyweights, including Noel Coward (Fleming's neighbor at Goldeneye) and Somerset Maugham. Ian and Anne had a rocky, though devoted, marriage. He did not fit in to her literary circles and she did not enjoy Goldeneye. Apparently, her circles were too intellectual for him, and Goldeneye was too out of the way for her. To illustrate their contrasting tastes, Fleming routinely avoided her literary parties and she would not let him dedicate Casino Royale to her.

He began writing the Bond novels after he was married. As his close friend, Robert Harling, observed: “For Ian, marriage was an admission of defeat….Hence, the Bond books were an escape.” Fleming worried about the criticism his novels might receive from Anne's friends, but viewed the Bond books more as an extension of the adventure stories he enjoyed as a kid. Fleming instilled in Bond's character (and in the stories, themselves) a perpetual boyishness that was also in Fleming.

Through the Bond novels, Fleming adds elements of himself and his background into Bond to live out his own fantasies. In addition to the escapism of the novels for Fleming, he also uses the books as a conduit to exorcise some of his own demons. Much of the nihilism and fatalism of the latter Bond books reflect Fleming's own failing health and confrontation with mortality. 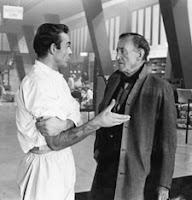 But the novels were also a conduit for Fleming to dwell on any matter that interested him. Cars, cards and gambling, food, drink and women....but also crime. After reading Fleming's travelogue that he wrote late in his life, Thrilling Cities, it becomes clear just how fascinated he was with gangsters and mob wars. While in Chicago, his own sightseeing excursions took him to “famous gangster black spots of the era.” Places like the Cathedral of the Holy Name, “where the cornerstone still bears the scars of machine-gun bullets fired at gangster Hymie Weiss…” Fleming goes on to recount various scenes of mob warfare — touring Chicago as if it was Gettysburg. When in Los Angeles, he made sure to visit his detective friends working there to discuss the current crime situation, etc. This fascination with mob violence plays out in several of the Bond books: in Diamonds Are Forever and Goldfinger mob bosses figure prominently in the story and later, in The Spy Who Loved Me he presents two of his greatest goons: Sluggsy and Horror. Diamonds Are Forever also touches on another interest of Fleming — the diamond circuit — including the legitimate business as well as smuggling. Fleming would later elaborate on this topic with his fiction/nonfiction account The Diamond Smugglers.

Fleming was not content to write the series in a wholly formulaic pattern and can be seen constantly mixing things up. Whatever pattern had developed into the series with the first couple of books, Fleming changed it with From Russia With Love, where the first half of the novel is told form the perspective of the Russian spy organization, SMERSH and Bond does not enter the story until the midpoint. Later, in The Spy Who Loved Me, Fleming writes in the first person from the heroine's point of view and Bond is not even on a mission (for Her Majesty, that is). Other tales put Bond as a bored guest at a dinner party or on a minor sniper mission. Each story changes the series in some way or another and keeps it fresh.

All these things, Fleming's personal experiences, his escapist fantasies, his narrative experimentations, all work in concert to keep his novels relevant today and help to drive the Bond franchise through its fifth decade of success.

Happy 100th birthday, Ian Fleming! Thank you for giving the 20th Century its greatest fictional pro-Western Cold Warrior and defender of Her Majesty.

Much of the information in this post comes from Raymond Benson's The James Bond Bedside Companion, from Ian Fleming's Thrilling Cities, and, of course, the Bond books.

Ditto. This stuff is catnip for a spy fan like me (though one too lazy to have read Benson's book -- or more than a couple of the novels).