THIS FILM SHOULD BE PLAYED LOUD! 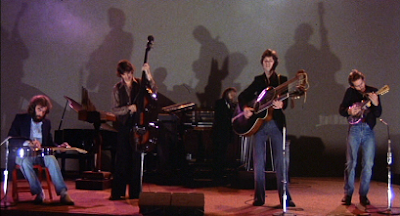 By Edward Copeland
When I first planned to commemorate the 30th anniversary of Martin Scorsese's The Last Waltz, I'd hoped to integrate thoughts on Scorsese's recent Rolling Stones film, Shine a Light, but it slipped in and out of town before I got a chance to see it. It was probably for the best. When you've already made one of the greatest concert film/rock documentaries of all times, it would be pretty difficult to top.

When I saw The Last Waltz for the first time, I was very fortunate: It was in a Manhattan movie theater on the occasion of its 20th anniversary re-release. For those unfamiliar with The Last Waltz, it chronicles the farewell concert of The Band on Thanksgiving 1976 at San Francisco's Winterland theater after 16 years on the road, since the musicians couldn't imagine continuing touring and playing for 20 years (an interesting contrast to the Stones).

The thought of two decades on the road is daunting because, as Robbie Robertson says, it's a "goddamn impossible way of life." The event turns out to be more of a celebration than a concert, with countless musical greats showing up to give The Band a suitable send off, including Eric Clapton, Joni Mitchell, Neil Young, Emmylou 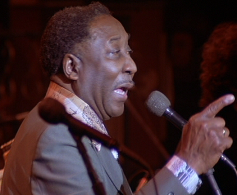 Harris, Ringo Starr, Dr. John, Van Morrison, Ronnie Hawkins, The Staples, Ron Wood and even Neil Diamond. The great Muddy Waters shows up to perform his quintessential "Mannish Boy," a song I was first introduced to in Risky Business. What makes The Last Waltz so great, other than the music, is the way Scorsese has designed it as a film. You're barely aware that there is an audience present as the cameras are firmly ensconced on stage with the performers. He's also aided by first-rate cinematographer Michael Ballhaus with backup help by Vilmos Zsigmond and Michael Watkins. He also has enough inside stuff to make The Last Waltz qualify as a documentary, but not enough to stop the film from being a 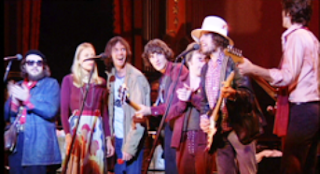 true musical feast. You get plenty of great nuggets from the members of The Band about their history and other elements, but the show's the thing, especially the way Scorsese has storyboarded it out as he would any feature he makes. It's especially notable once the great Bob Dylan shows up in a shot that begins with his hat before moving down to the unmistakable face and voice. Scorsese's brilliant way of shooting the concert makes it so intimate, especially if you are fortunate enough to see it in a theater, that you feel as if you are more a member of the assembled musicians on stage than just an audience member. If only I could have been there in 1976... 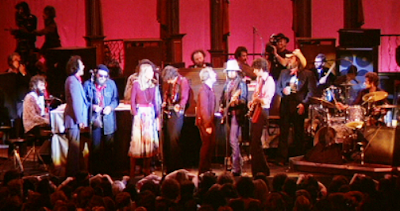 I read the audience was fed Thanksgiving dinner before the show, and after all the opening acts it was well past midnight when The Band finally played. Yes, if only!

This is a great concert movie, in my top three along with Stop Making Sense and (my all time favorite) Dave Chapelle's Block Party. Ed, it's best you didn't see Shine a Light; it's pathetic. Didn't the Stones do this in At the Max already? I love the Stones, but do they actually need all these concert movies made about them? The deja vu I felt watching Shine contributed to my boredom. And they don't even sing a certain Scorsese staple either. It was sad.

Great appreciation for a great film ... my favorite performer is Van the man ... god, what a great performance. And Neil Young with a Certain White Powder hanging out of his nose.