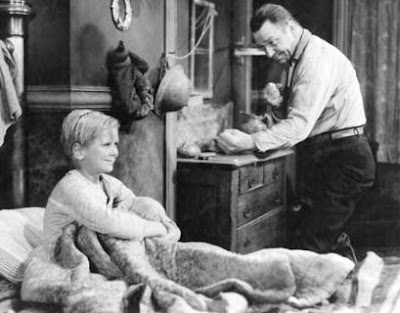 By Edward Copeland
I will post the winners of the worst best actor survey Monday, but I thought I'd give you a little teaser. Wallace Beery's 1931-32 win (a tie no less) for The Champ was the only performance to fail to receive a vote as either the best or the worst of best actor Oscars.

Comments:
Are you serious? Okay, who the hell other than me has seen In Old Arizona? It's nice to know there are other Oscar obsessives out there. Starting when I was a kid I have striven to see EVERY winning performance and film. I've seen all the Best Pictures and Best Actors and have only two Best Actresses I've not yet seen (but I'm not saying which).

JL, Peter Nelhaus has seen In Old Arizona as part of his apparent project where he sees Every Dadgum Thing Ever Made. Running a movie by Peter is like a cinephile form of stump-the-band. :D Karen, a frequent commenter at my place, also saw IOA. I can't think of a single Warner Baxter performance I have seen.

I have, however, seen The Champ & thought Beery was good in that three-hanky parental-sacrifice sort of way, though not what you'd call subtle. But in 31-32 people must have needed catharsis in a big way.

I thought "The Way of all Flesh" was lost, which meant that no one has seen it for decades. So unless we have rather old voters, how could anyone have voted it?

You are right Partisan. The person who voted for Jannings specified that he'd only seen The Last Command of the two films Jannings won for.

I've seen In Old Arizona, and if I had gotten my votes in on time (damned appendectomy got in the way), Warner Baxter would have ranked #1 on my worst winners list. Jannings in The Last Command would have been in my five best winners.

There's a nine-minute fragment of The Way of All Flesh floating around (a few 16mm film renting libraries have it); if you can get ahold of it, you can claim to have seen as much of the Jannings performance as anyone since the silent era.

What's really scary is that I have actually seen both versions of The Champ on the big screen. I just didn't think it necessary to begrudge Beery his "tie" with Fredric March.

Well, I figured others had seen "In Old Arizona" - I was going with shocked hyperbole. And, yes, I've commented on my blog that Peter is a walking encyclopedia of film - he's quite impressive.

As for Emil Jannings, I was referring to "The Last Command". Back in the first year of Oscar both Best Actor and Actress were nominated for more than one performance with the winner receiving a kind of "Best Overall" award. So for Janet Gaynor, if you've seen only one of these three: "Seventh Heaven" "Street Angel" or "Sunrise" then you can say you've seen her Oscar winning performance of that year. But if all nominated winning roles count, then no, I've not seen "The Way of All Flesh."

Peter - You say you've seen both versions, but there are three. Anyone know the third to which I'm referring?