I Have a Feeling We’re Not in Kansas Anymore 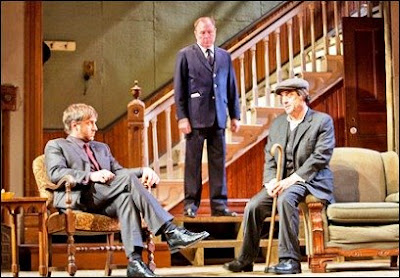 By Josh R
Doesn’t everyone get a bit homesick now and then?

The notion of homecoming, the act of returning to one’s roots and the soil in which

they were cultivated, has always been fertile ground for easy sentimentality. The very word inspires automatic feelings of cozy nostalgia, conjuring up a cherished scrapbook of sun-dappled childhood memories — or at least the warm, albeit artificial glow cast by memories of a seemingly endless succession of Campbell’s soup commercials. Consider the folksy truisms, of the sort that you’d expect to see embroidered on samplers framed by needlepoint rosebuds, that have sprung up around the concept of home: “Home is where the heart is”; “East, West, Home’s Best”; and of course, “There’s no place like home.” When L. Frank Baum’s heel-clicking heroine, Dorothy Gale, uttered those immortal words whilst hightailing it back to Kansas sans benefit of earthly transportation, she knew she was returning to an atmosphere of safety and security. Had she suspected otherwise — unsavory as it may be, assume for a moment that life on the farm with Hank and Em wasn’t quite as wholesome as surface appearances would indicate — she might well have decided to stay put.

There is a perverse, if more intriguing alternative — nothing that ever would have perturbed the thoughts of the grandfatherly Mr. Baum, mind you, but perhaps one that someone with a more piquant imagination might have entertained. Suppose, just for a moment, that having enjoyed a taste of life on the wild side, and facing a future as predictably flat as the dry Kansas prairie, Dorothy decided to suspend her travel plans. The wonderful, terrible Land of Oz, with its mystical dangers and undercurrents of depravity, might not look so bad to an adolescent girl secretly itching for a bit of excitement.

Mightn’t she be tempted to explore the dark and unspeakable powers, so coveted by witches, of those potent ruby-red pumps before they whisked her back to the suburbs of Topeka? Moreover, with an exotic trio of male cohorts, embodying the qualities of both man and beast and attending her with a devotion verging on rapturous idolatry…well, even squeaky-clean farmers’ daughters have been known to test the waters at the deep end of the pool.

If such ruminations engender feelings of shock and outrage (for the puritanical, as well as Oz-purists, they may be tantamount to sacrilege), the sensational production of The Homecoming currently in residence at The Cort Theatre is probably not the show for you. For those with more adventurous tastes than can be satisfied by the it’s-OK-to-be-different sanctimony of the Oz-riffing Wicked, Daniel Sullivan’s superlative revival of Harold Pinter’s 1964 masterpiece is a theatrical experience not to be missed. If the title suggests a degree of sentimentality, those familiar with the work of the play’s Nobel Prize-winning author are apt to know better. Featuring superb performances by Ian McShane and Raul Esparza, and a truly astonishing one by the stunningly sphinx-like Eve Best, The Homecoming posits the cautionary assertion that while you can go home again, you’d do well to consider what you’re letting yourself in for.

The Homecoming is a play about power — where the balance lies, the manner in which it shifts, and how to wrest it away from opponents and exploit it to maximum advantage. Encounters which have the outward appearance of routine exchanges — typical familial squabbles over who ate the late biscuit, who’s responsible for making the dinner, and the manner in which people contribute to the household expenses — are actually tense, charged skirmishes in an ongoing battle for supremacy which observes neither the traditional rules of conduct nor the conventional morality by which they are defined. Accepted gender roles, class distinctions, and the sexual boundaries that govern and restrict familial interactions are put up for grabs, dismantled and demolished in ways that are as appallingly funny as they are disquieting. The vivisection of sacred cows begins innocuously enough with the return of a prodigal son (James Frain), a professor at an American university, to his dilapidated childhood home after a long period of estrangement. He brings in tow his genteel, apprehensive wife (Best), the mother of his three sons, to meet his blue collar relatives — his retired butcher father (McShane), his browbeaten chauffeur uncle (Michael McKean), and two brothers, a cocksure pimp (Esparza) and a dull-witted pugilist (Gareth Saxe). By the end of the play, taboos have been broken, bonds have been breached, and everything society regards as sacred on the subject of family has been more or less turned on its ear. This particular reunion is enacted without much heed for anything so prosaic as the common moral code; whether observing filial, fraternal, parental, or spousal relationships and the weight that they carry, the playwright arrives at the subversive if not heretical conclusion that anything can be used as a bargaining point.

No more shrewdly is this lesson registered and applied than by Ms. Best’s Ruth, who ventures into the sinister unknown with halting steps but confidently hits her stride upon familiarizing herself with the rules of the game. The protean British actress, who received a Tony nomination for last season’s revival of A Moon for the Misbegotten, morphs convincingly from a withdrawn, hesitant onlooker to a fully engaged combatant — one who is totally cognizant of the power she wields and a canny appraiser of its effect on the other players. Playing a woman who begins as a tentative, somewhat passive figure and convincingly (and very sneakily) ripens into the one holding all the cards, Best brings a palpable, slow-burning erotic charge to one of the most intricately layered, subtly executed power plays ever attempted in contemporary drama. With her impenetrable Mona Lisa smile and sinuous, cat-like movements, the actress is a marvelously enigmatic presence, suggesting the infinite range of possibilities inherent to the madonna-whore dichotomy. When the men engage in a bidding war to determine Ruth’s fate — deciding whether she returns to mother her children back in America, or stays to sexually service her in-laws while earning her keep as a prostitute — the lady in question is more than willing to assume her place at the bargaining table, smugly negotiating the terms of surrender (or is it victory?). The biblical character of Ruth, who famously embodied the concept of wifely devotion, is credited with the line “whither thou goest, I shall go…thy people shall be my people.” Best’s Ruth certainly takes her husband’s people to her bosom, both figuratively and literally, but there’s nothing accommodational about it. Rather than being along for the ride, she winds up leading everyone by the nose.

Lest it be thought that the men orbiting around this dazzling satellite are nothing more than helpless patsies being sucked in by the gravitational pull of something they are powerless to resist, the actors portraying them register as more-than-worthy adversaries. The great Mr. McShane, best known on these shores for his galvanizing stint on HBO’s now-defunct revisionist Western Deadwood, brings his trademark combination of mesmeric charisma and visceral menace to the irascible father, Max, who while physically constricted by the ravages of age has lost none of his ability to inflict damage on those who think they can get around him. As the unscrupulous Lenny, Mr. Esparza is a marvelously lurid figure, booth smoothly seductive and shockingly repellent — somewhat paradoxically, he embodies both characteristics at the same time, and in such a way that each seems to be informed by the other. In the scene that provides the catalyst for Ruth’s transformation, he and Ms. Best enact a dazzling pas de deux of erotic tension, all the more remarkable for its disarming subtlety. James Frain strikes the right notes of smug self-satisfaction as the arrogant Teddy, while the hulk-like Mr. Saxe offers a compelling consideration of a child-man driven by primitive instinct and an acute need for nurturing. Mr. McKean, known primarily as a comic actor, is hampered by a rather uncertain working-class British accent that comes and goes, but convincingly registers the horrific realization of what is going on once the playwright unceremoniously chucks the baby out with the bathwater.

And baby, does the bathwater fly. Contrary to what one might expect, this does not entail yelling, shouting, melodramatic plot points or any other devices of strenuously executed theatricality. The cagiest of dramatists, Pinter is much more interested in the aggression in stillness, and the queasy sense of discomfort than can be achieved through silence and withholding. While he builds tension with remarkable economy, the stakes are never less than gargantuan; when a father warns his son that he may “drown in his own blood,” the metaphorical significance is not lost on the audience; at any family gathering haunted by unresolved feelings, the ties that bind can cut right through the skin. No literal blood is spilled onstage, but the play itself is still as provocative and unsettling as it must have been to audiences of the mid-sixties, and as such is not to be recommended for the faint of heart. For those who’d like to retreat to the comfortable safety of Kansas, the interval between acts would serve as good a time as any for the clicking of heels and hoping for the best. For everyone else — including any Dorothy Gales out there who are fascinated by what the seamy side of life has to offer — sit back and enjoy the ride.

Comments:
This is my favourite play by Pinter. Thanks for the review.

I had great seats for this production, but unfortunately was sitting right in front of an elderly man wearing one of those damn infrared hearing devices, and it was mthey were making incredibly loud feedback whining noises throughout the play. Sheer torture, especially in a production of a play known for the importance of its SILENCES.

Being a big movie fan, I lurk a lot in The House Next Door, and I am so glad I followed the link to this blog.
Just got back from NYC and saw this while I was there; everything you wrote is true and then some - esp. Raul Esparza. His performance was breathtaking. Thanks to Joe R. for expressing my thoughts much better than I ever could.
Sarah

Yikes - see, this is why I do not leave comments. Because I get the basic civilities totally wrong. :)
Sorry - Jeff. I will look forward to your further adventures in theatre while quietly lurking from now on.

You just watch it, Odiekins. I've got the blonde wig... and I'm not afraid to dye it if you don't shape up.