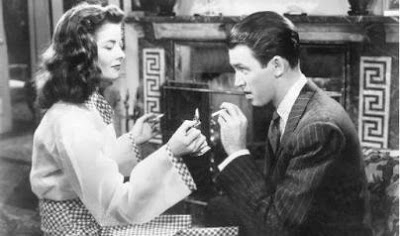 "He’s obviously having a great time, and it’s infectious."
Tina 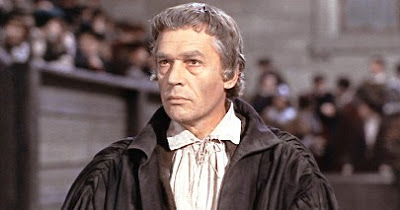 "One of the few actors capable of playing integrity without coming of as a plaster saint or an idiot. That Voice helps. But it is because Scofield is able to embody the notions of justice and goodness — the idea that Laws should be obeyed by everybody, including leaders chosen by God — that we feel his tragedy emotionally not just intellectually."
David Cassan 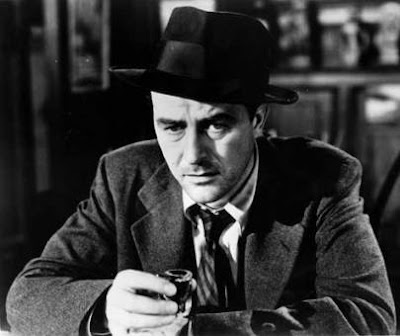 "I can't even say anything. This movie made me lose my mind right along with him, and he's in practically every shot of the film. It's awesome, he's breathtaking."
Kelly Chisholm 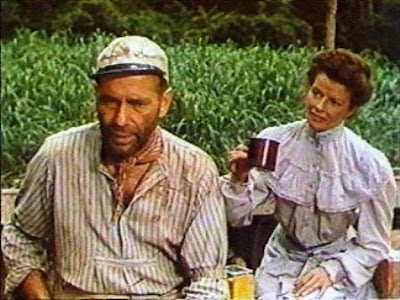 "This is a straight-forward movie star performance — a fastball right down the middle. It's easy to condescend toward a performance like that, but I think this kind of role can be as hard as anything else. It might be a fastball, but you've still got to be able to hit it — and Bogart knocks this one out of the park."
Joshua Flower 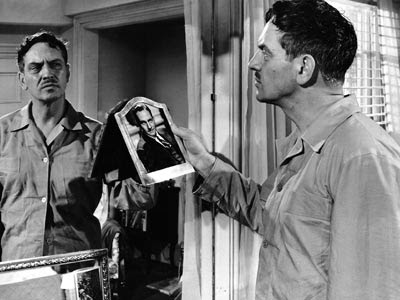 "March is usually described as a flashy, scene-stealing actor, but his two finest moments in this movie are played in silence. There's March's expression as he walks into his home and sees Myrna Loy, flesh and blood instead of the image he yearned for through all his time at war. And then there's March's face, tired and hung over, trying to find himself in the picture on the mantelpiece, a photo of a man he will never be again."
Campaspe 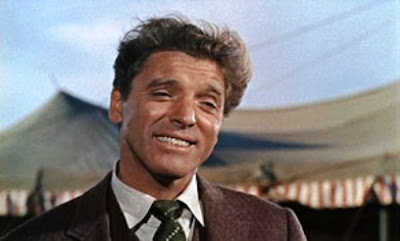 "I don't know if I can defend this on anything other than loving Burt Lancaster, especially when he lets it rip."
Stephen Mullen 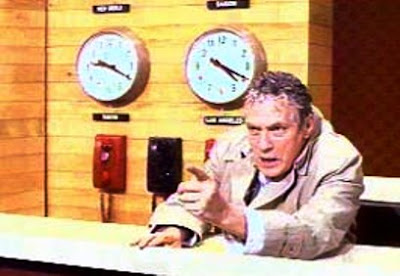 "Simply one of the most brazen, complicated and perfectly and appropriately hammy performances in film history. I love Paddy Chayefsky and his Network screenplay — but his work can be faulted for a complete lack of subtlety. (Ned Beatty, another great scenery chewer in the film, called it "bad Brecht" at the time). But you can't fault Finch here. The emotions, unforced but impossible to ignore, play across his face and he brings out the comedy and the tragedy of his character in full force. No one has ever called bullshit on life in our over-medicated age more eloquently."
Bob Westal 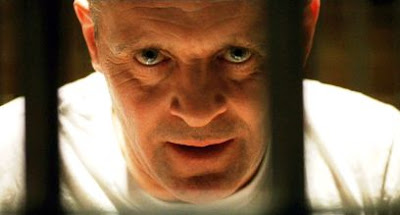 "With only 15 minutes or so of screen time, Hopkins does what very few actors could do with triple that amount of time. His Hannibal Lecter dominates every frame of the film and I often find myself thinking about him even when he’s not on screen."
James Henry 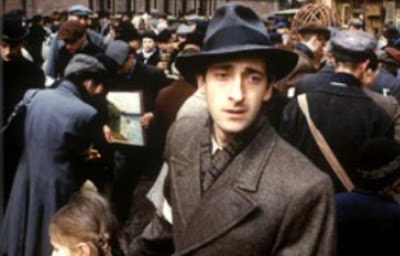 "One hates to overhype a performance — or do so with tired cliches, but Brody does, I think, capture some very fundamental truth about the resiliency of the human spirit. It's a quiet, lived-in performance, not flashy, mostly reactive."
Joshua Flower 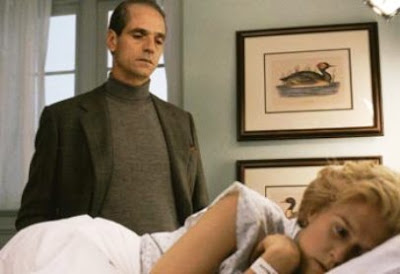 "A hilarious, charming performance in Barbet Schroeder's satire of the American class and legal systems. Irons' debonair Count Chocula is a perfect counterpoint to Ron Silver’s dour Groucho Marx. Despite flashes of guilt or regret, his Von Bülow has a lightness that makes him float over the decadence and venality around him. Irons makes depravity sympathetic. This character deserves his own Busby Berkeley musical, directed by Fassbinder."
David Cassan 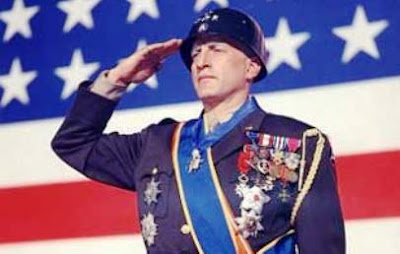 "Every time I see this movie I think: 1) It's an average biopic and 2) Thank God they cast Scott or it would have been below average. Given the utter banality of Coppola's script and listless workmanlike direction by Schaffner, this is one of the few movies in existence that can truly be said to be all about the performance."
Jonathan Lapper 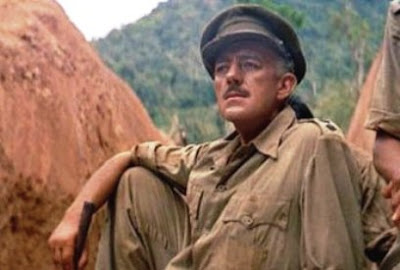 "Courageous, pigheaded, utterly bonkers, Guinness carries the weight of a script that has him standing in for all the mythical glories and bloody illogic of imperial Britain. His performance is so superb that the moment you glimpse Nicholson's madness is the moment of his greatest heroism, as he is carried out of the hotbox — the colonel is still fighting for that crisp self-discipline. And you realize, looking at Guinness' wobbly yet triumphant walk, that a sane man would have snapped."
Campaspe 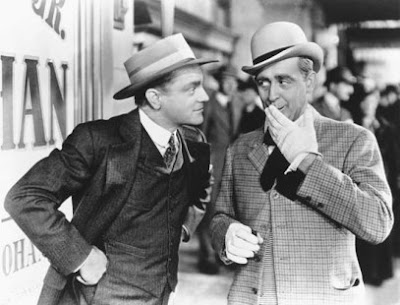 "Cagney deserved his Oscar if only for the way he threw himself into this role. I still get a kick out of seeing his dance steps. Even though he's dancing, it still looks like he's coming to kick your ass."
Odienator 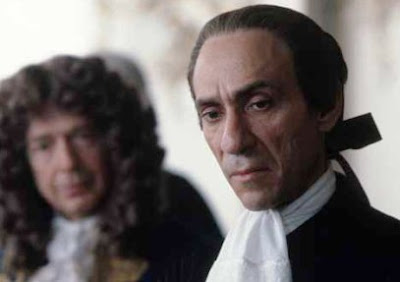 “His subsequent career hasn't been worth anything, but I wouldn't take anything for this performance. Abraham's is a perfectly modulated study in contradictions — someone who can appreciate Mozart's genius, while feeling nothing but jealousy and hatred because it isn't his, someone so tortured by Mozart's genius that he feels compelled both to destroy Mozart, and yet would never allow Mozart's work to be destroyed. And as a simple portrait of jealousy, it's most powerful when you realize how much you can relate to it.”
Daniel Smith 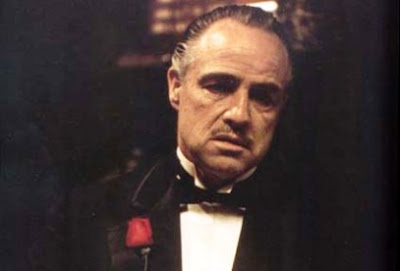 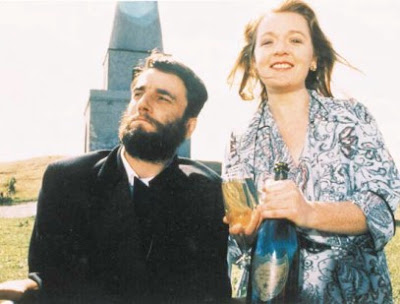 "What makes this performance so great is that Day-Lewis never asks for our sympathy; he makes Christy a fully-rounded individual. Plus he drinks your milkshake. He drinks it all up. With his foot!"
Odienator 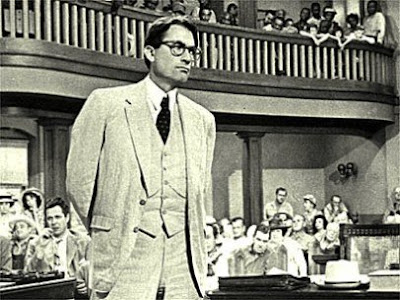 "Atticus Finch is the man you wish your father was. Played by most actors, he would seem unreal and superhumanly perfect. But Gregory Peck, in the finest performance of his career, makes you believe that such a man could really exist."
Lesley 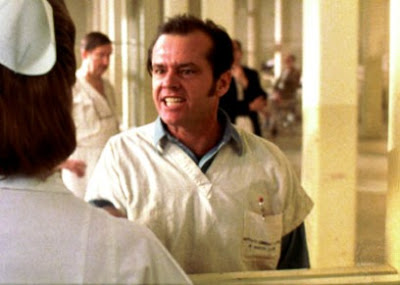 "Nicholson's most salient characteristic as a performer has always been his undeniable charisma — at his worst and most predictable, he tends to coast on it. To these eyes, his singular magnetism has never been harnessed to better effect than in Milos Forman's adaptation of counter-culturalist Ken Kesey's scabrous attack on institutionalism, condemned in both the novel and the film as a force devoted to the suppression of individuality. There's no suppressing Nicholson, however — his expansive personality can't be contained, and he embodies the contradictions of the role with masterful strokes. The sly humor is there of course — along with an element of danger. He makes McMurphy at once both seductive and repellent, smooth and volatile, the only sane man in the psych ward and perhaps its most unstable. Nothing predictable in that."
Josh R 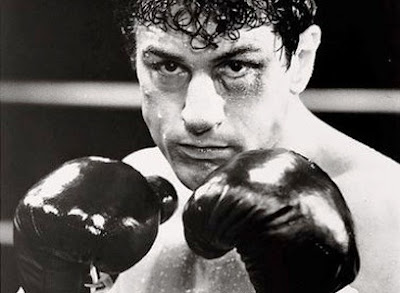 "Oddly, my favourite parts of this performance aren’t the big‚ acting moments‚ Jake La Motta punching the walls of his jail cell, or smacking Cathy Moriarty around, or letting Joe Pesci punch him over and over again‚ but those grainy home-movie images of the increasingly paunchy Jake barbecuing and lounging around the pool: a sociopathic bully taking it easy and livin’ the good life."
Paul Matwychuk 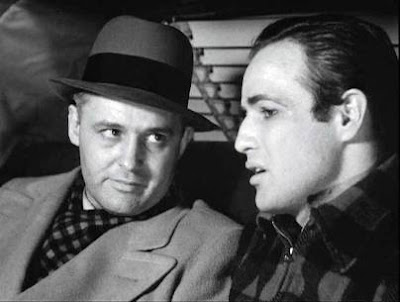 Comments:
"There's March's expression as he walks into his home and sees Myrna Loy, flesh and blood instead of the image he yearned for through all his time at war."

Would have liked to have seen him higher, but oh well. March was the master.

Killer blog, although I would have loved to see Roy Scheider's performance in All that Jazz on your list of greats!

This was alas a survey only of best actor Oscar winners. While Scheider was nominated and good, he didn't win so he wasn't eligible for the cut.