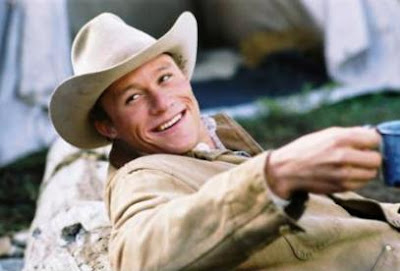 Here's an obit I never expected to write. I thought Ledger was among the more talented of the younger crop of actors, not only for his Oscar-nominated performance in Brokeback Mountain, but in light fare such as 10 Things I Hate About You or A Knight's Tale. I actually thought he didn't get the praise he deserved for his small role in Monster's Ball. Of course, I looked forward to see him play The Joker in Christopher Nolan's Batman sequel, but that's going to be an eerie experience now. RIP Heath.

Comments:
Thanks, Edward. I didn't know Ledger's work much beyond what you mention, but it was clear he was talented and seemed to have a lifetime of interesting work ahead of him. I hope the best for his family in the difficult times ahead. And you're right-- it's sure going to cast a different light on that Batman film.

Thanks Ed for this. I can't believe it myself. I'm guessing that it won't be good news on how he died. I always thought he was very good in his roles. Obviously I didn't know the guy, but it's always tragic when someone this young dies, famous or not.

Thanks Ed. Sad, sad news. I agree that he was a talented young actor. He probably had many good roles ahead.

What a tragic waste. His supporting turns in Monster's Ball and the Lords of Dogtown more than sparked my interest in this young man, but it was his work in Brokeback that was a revealation. When the credits began to roll I turned to my girlfriend and told her that Brando couldn't have done this role any better. Not since River Pheonix have I felt the loss of such a talented leading man. A great blow to the film industry and film lovers world over.

I heard about this when my plane landed this evening. I was shocked.

I wrote that he was the best thing about Monster's Ball, and I thought he got ROBBED for Brokeback Mountain. I wonder if the Oscar voters thought "he's young, he'll have lots of other roles" when they cast their ballot. Sadly, that won't be true.

I agree with you, odienator. Heath Ledger's performance in Brokeback Mountain was the more daring, the more together, and eventually the more accomplished one compared to Hoffman's in Capote. He was robbed, and now he's dead. It's a fucking shame.

While I think Ledger should have won everything for "Brokeback," up to and including the Nobel, let's not denigrate Hoffman here. Let us praise an actor of surprising range, one equally at home in frace, romance and drama, let us mourn his loss and let our hearts go out to his daughter and family.

Oh, I'm not denigrating Hoffman, but merely pointing out that Ledger's performance in Brokeback Mountain was a far more cultivated, and difficult, one than Hoffman's in Capote.