Samuel Fuller and the Temple of Doom 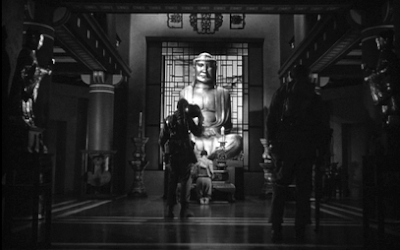 By Edward Copeland
In many ways, Samuel Fuller was the founding father of the independent film in America and that truly shows in one of his earliest efforts, 1951's The Steel Helmet, a Korean War story told while that conflict still raged. Using spare sets and some so-so acting, Fuller certainly spun a silk purse from a sow's ear. 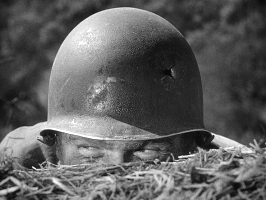 What's remarkable is how much Fuller covers with so little resources and such a short running time (less than 90 minutes). The Steel Helmet begins with one of the best opening sequences I've ever seen. As the opening credits unfurl, the camera stays focused on a soldier's helmet. You'd probably be right to think it's just emblematic of the title, but as the credits end, that helmet raises and you meet the eyes of gruff Sgt. Zack (Gene Evans), slowly looking around before struggling to free himself from the ties that bind him. Soon, he gets an unlikely ally to help him: A Korean orphan he names Short Round (William Chun), who immediately corrects the soldier when he dares to call the kid a gook. Racism underlies the entire movie, but it's never preachy which makes it all the more powerful. 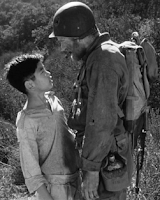 Soon, the pair encounter an African-American medic (James Edwards) before hooking up with an entire brigade, searching for a Buddhist temple to serve as an outpost. What unfolds after that is more the stuff of psychological drama than that of standard war films, until its final, tense climax. Still, it's the relationships between the characters as they remained holed up in that temple that really gives Fuller's film its power. It's pretty incredible that this was made while the Korean War still was going on, though it's clear that World War II is as much the subject as Korea, much in the same way Robert Altman's MASH wasn't about Korea but Vietnam. In fact, instead of "The End" closing The Steel Helmet, instead Fuller fills the screen with words to the effect that this is a story that has no end. Fuller's reputation has grown over the years and deservedly so. This taut example of excellent filmmaking more than makes the case that you don't need a lot of resources to produce truly remarkable film.

Comments:
I don't usually endorse war movies, but I'd be lying if I didn't admit that The Steel Helmet is one film I return to over and over again. I just wish I could get a copy on DVD without having to shell out the big bucks for the Criterion/Eclipse Sam Fuller set (I'm not too wild about the other two films, I Shot Jesse James and The Baron of Arizona).