Earlier this year, when Philip Roth released his final Nathan Zuckerman, his fictional writer protagonist commented upon the passing and aging of his fellow novelists, mentioning the diminished physical state of Norman Mailer specifically. Mailer now joins Zuckerman's list of those who have shuffled off this mortal coil with news of his death at 84. 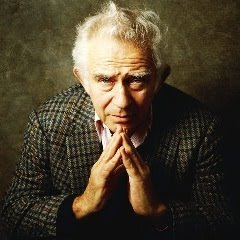 Of course, Mailer was far more than just a mere novelist. He changed the rules of nonfiction as well with his riveting account of Gary Gilmore's life, crimes and execution in The Executioner's Song, which won him the second of his two Pulitzer Prizes (the first came for Armies of the Night, an account of the 1968 Democratic convention). He blended his own career with fiction in the great Advertisements for Myself. He wrote screenplays of his novels and even tried his hand at directing, including the adaptation of his own novel Tough Guys Don't Dance. He even did some acting, most notably as the architect Stanford White in Milos Forman's Ragtime. According to IMDb, his last acting credit was as Harry Houdini in 1999's Cremaster 2. He helped to found The Village Voice. Of course, he also was a figure of great controversy, stemming from the stabbing of one of his wives and his mentorship of prisoner turned writer Jack Abbott, who promptly stabbed someone to death upon his release to a halfway house.

Though he made his name with a great World War II novel, The Naked and the Dead, he was often an antiwar figure, writing a book called Why Are We in Vietnam? and then turning expectations on their heads since the book depicted a bear hunt and didn't mention Vietnam once outside the title. During the current quagmire in Iraq, he published a more straight-forward book asking Why Are We at War?

He also was incredibly prolific, releasing The Castle in the Forest, which depicted agents of Satan grooming Hitler for his later evil deeds, earlier this year. It seems appropriate that a career that began with World War II would finish with an imaginative biography of that conflict's architect.