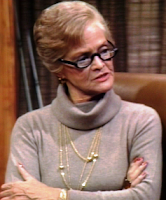 She wasn't the first Mama Carlson on WKRP in Cincinnati (that was Sylvia Sidney), but Carol Bruce certainly was the one you remember. I hadn't seen that the actress had passed away at 87 until I got my latest copy of Entertainment Weekly. Her list of credits on IMDb is surprisingly slim, containing lots of guest appearances on episodic television, and a few film appearances dating back to 1941. Still, if Mama Carlson were the only role she ever played, that would have been enough. She wasn't a regular on the WKRP, but she was a presence who contributed to many of the series' finest episodes. A personal favorite is the one where she hires a consultant to evaluate the radio station and the employees thwart her by acting the exact opposite of what she expects, where the report comes back saying that Les and Herb are the only ones on the ball.