Where have you gone Winona Ryder? 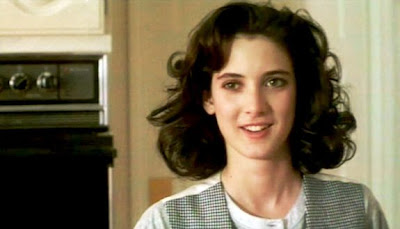 By Edward Copeland
Winona Ryder will turn 37 in October. How is this possible? Of course, we all age, but when I stumble upon a classic Winona Ryder film, her youthful greatness makes it seem impossible that the actress I had a major crush on decades ago is now closing in on 40, something that isn't helped by her near disappearance from the cultural radar. What prompted this post was catching her in the mixed bag of a 2007 film called The Ten and happening upon the ending of Beetlejuice on cable and falling for the Goth goddess once again.

I first noticed Ryder as the shy, tomboyish friend of Corey Haim in Lucas, but it was her performance in Tim Burton's Beetlejuice that really injected her into my consciousness. When I happened upon the ending of that film on cable last week, with her floating in midair, lip-synching Harry Belafonte, all those old feelings came rushing back.

Of course, my passion for Winona also was very dependent on hair color. As a result, I've never watched Burton's Edward Scissorhands. My Winona should NOT be a blonde. As luck would have it, the film The Ten arrived the same day I caught a bit of Beetlejuice. Ryder is pretty great in the film as a woman who becomes obsessed with a ventriloquist's dummy, even if the film itself (made by some of the same people responsible for the underrated gem Wet Hot American Summer) doesn't quite hold together.

Still, it was good to see Ryder again, able to be both funny, charming and a little bent. I know her run-in with the law over shoplifting derailed her career a bit, but it still makes no sense to me why her career stalled the way it did. Ryder managed Oscar nominations in two consecutive years (1993 and 1994) for Martin Scorsese's The Age of Innocence and Little Women.

She starred in and produced Girl, Interrupted in 1999, which won Angelina Jolie an Oscar but did little for Ryder herself. Where did the talent who propelled the brilliant dark satire Heathers (released the same year she soared as Jerry Lee Lewis' teen cousin/bride in Great Balls of Fire) go?

Even in lesser films such as Mermaids and Welcome Home, Roxy Carmichael, she was a pleasure to watch. The same year she scored an Oscar nomination for Little Women she also starred in the extremely underrated Reality Bites, which still stands as one of the best depictions of the post-baby boom generation ever put on screen. (I refuse to use the term Generation X, since the media tried to use a lousy novel by a Canadian to pigeonhole an American generational phenomenon.)

She made other films ranging from the so-so (How to Make an American Quilt) to the great (Looking for Richard and The Crucible), but somehow it seemed as if she were receding from view. By the time Girl, Interrupted came out, it was as if she were a star from days long past.

Ryder is an actress who was able to bridge the gap between modern tales to long-ago period pieces, something that not many of her peers can say. I have to wonder if the tale is true about her former friend Gwyneth Paltrow snatching the Shakespeare in Love screenplay from her coffee table and stealing the part as well. If she'd made Shakespeare, would things be different now instead of most of her work seeming to go straight to DVD?

Then there is the question asked by numerous film buffs: What if she didn't drop out of Francis Ford Coppola's Godfather Part III and she had played the role Coppola unfortunately ended up using his daughter Sofia for. Who knows? I do know though that Winona still holds a special place in my heart and I hope she gets the comeback she deserves.

She's going to be in the new Star Trek movie, apparently in a pretty big part. And she's got a Rebecca Miller indie coming out. Maybe the combination of blockbusters and art films will make her star shine again.

I noticed that Trek item in IMDb. Apparently she is playing Spock's human mom that Jane Wyatt played on the series.

I look at Keira Knightley and think, "She looks just like Winona Ryder!"

Actually, I never thought much of Ryder's acting talent, but she certainly has a screen presence.

You failed to mention her part in A Scanner Darkly, which I thought was memorable.
Maybe she's set to have another interesting round of roles in middle age. One can only hope.

Oh yes, I recall reading in an interview that she's a natural blonde. That's not to say she wasn't cast against type in Edward Scissorhands.

I can't go with you on your Winona love. I couldn't stand her for much of her career. I did acknowledge that she's wonderful in Age of Innocence and Little Women, but other than that, I've been mean as hell in my reviews of her work. Those two films notwithstanding (and she really surprised me with them), I've disliked mostly everything she has done. How Josh R. hates his blondes, I hate my Winona. Funny that she's a natural blonde. Josh R. and I both should just explode over that fact.