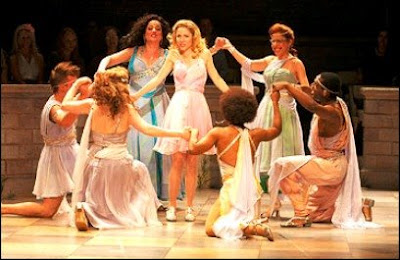 By Josh R
Forget whatever Mom and Dad told you. Respect is not always a good thing. Not everyone — or everything — deserves it. Sometimes it’s only right to be disrespectful.

Before anyone accuses me of being a bad influence, please note the use of qualifying 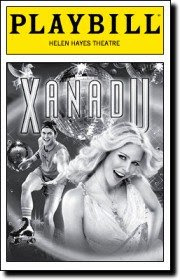 adverbs to mitigate these statements. Apart from the high-ranking hawks who regard those sissy Geneva Convention mandates as impediments to achieving World Peace, no one is claiming that respect — for international law, the social compact or one’s fellow man — is an overrated virtue. That said, when it comes to the process of adapting a film into a musical, assuming an overly reverential stance toward one’s source material can not only be foolish — it can be fatal. If treating the original like the Holy Grail makes for a work of theater that feels like a pale imitation (*cough*Young Frankenstein*cough*), it’s best to rethink the soundness of the concept. If the source material isn’t very good to begin with (*cough*Footloose*cough*…drat these allergies), then by all means, don't treat it with reverence. Don’t be tolerant or considerate — don’t spare people’s feelings. Tear that sucker down. Be brutal.

As a film, the 1980 musical Xanadu was, and remains, virtually unwatchable. Perhaps best remembered as the vehicle which brought Olivia Newton-John’s acting career to a crashing halt, there's very little to be said in either its favor or its defense (if pushed, I'll grant that the art direction is borderline acceptable, in its tacky, Dance Party USA kind of way). The lame-brained plot — presumably devised at a slumber party and written out in glitter-pen with a smiley face in each O and a heart atop each i — told the story of a Greek muse taking human form to help a hapless hunk realize his artistic potential by opening up a roller disco. Tongue in cheek? Try tongue in place. Not even the presence of Gene Kelly in a supporting role lent an iota of credibility to the concept, or brought any redeeming value to the entire lunatic enterprise; it was always destined to be less Singin’ in the Rain than Singing to Cause Pain. Even at the dawn of the '80s, an era not exactly known for good taste, the moviegoing public still knew a stinker when they smelled one.

Understandably, the news that Xanadu was being adapted for the Broadway stage did not initially inspire a great deal of confidence. For all those who wondered if the people behind the decision to retrieve this glittery corpse from its mirror-balled, midnight movie grave were actually serious, the answer is — and for this we must all give thanks — of course not. The creators of Xanadu not only acknowledge how bad their source material is; in holding it up for ridicule, they subject it to the sort of skewering that goes well beyond innocuous parody. While the silly, peripatetic spectacle cutting a broad swath across the stage of the Helen Hayes Theatre in pastel-colored spandex is an affectionate send-up, it strives above all other objects to impress upon audiences just how remarkably bad the original film is. To that end, it succeeds, and the result is never less than trashy, snarky fun. As to whether or not a silk purse has been made out of a sow’s ear, I’m inclined to think not. That the jokers behind the stage incarnation have managed to get a brightly colored polyester handbag out of the most unprepossessing specimen in the pen is victory enough, and theatergoers who expect nothing more than a good time aren’t apt to leave feeling short-changed.

Any fear that the librettist Douglas Carter-Beane (The Little Dog Laughed) will be approaching his source material with anything other than the lack of respect it so richly deserves is dispelled early on, when the heroine chirpily declares her intention to take human form, don rollers skates with pink leg warmers, and speak with an Australian accent — in this case, so thick it practically bleeds Vegemite. Kerry Butler, the bright-eyed, angel-faced comedienne who memorably created the role of drippy tagalong Penny Pingleton in the Broadway production of Hairspray, delivers a merciless parody of her cinematic predecessor — her cheerful evisceration of Newton-John is spot on, right down to the infamously breathy delivery. Even if the actress’s performance is bit too knowing to fully capture the dreamy, slightly dazed quality that made the Aussie singing sensation such a soft-focus antidote to the flashy excesses of the glam-rock era, she’s still about as sunny as Dorothy Hamill doing a toothpaste commercial, with a vapid wholesomeness that shimmers with the same synthetic twinkle as her frosted lipstick. Like Ms. Hamill, she is also incredibly adept on skates — so much so that the 4.8s posted by some members of the Greek chorus during her spiral sequence seemed criminally low. Needless to say, Ms. Butler’s Clio/Kira is drawn less from the realm of Greek mythology than Me decade American kitsch; she’s unmistakably Olivia Newton-John, but as if played by Marcia Brady during open mike night on The Love Boat. If the characterization seems more in keeping with the sort of broad, shtick-laden impersonations of Forbidden Broadway sketches than the sort you’d expect to see in a full-length book musical, that’s in keeping with the tone of the show itself; she’s amusing enough to make you overlook the fact that everything she does exists on a purely one-dimensional level.

The same came be said of her strapping leading man, Cheyenne Jackson, who speaks in perpetual tones of dawning awareness as the embodiment of sensitive-hunk cluelessness. He’s the All-American boy as a sweet-natured simpleton; his super-short, super-tight jean cut-offs have apparently cut off all circulation to his brain. Perhaps because the tone of the show is so broad, and the rest of its cast favor a style so exaggerated, Tony Roberts seems a bit too restrained in the silver fox role originated by Kelly — his breezy, dapper charm is out of place in a show that seems pitched squarely over the top. Restraint is not a term that could applied to the scenery-chewing antics of Mary Testa and Jackie Hoffman, who steal the show every time they appear onstage as Clio’s scheming sisters, Melpomene and Calliope. A bosomy, brass-lunged belter in the Lainie Kazan mold and a shrunken troll-doll reminiscent of Jack Gilford in drag, this wonderfully mismatched duo provide the evening with its musical and comedic highpoint, a shrieking, cackling rendition of “Evil Woman” that is delivered in a key best described as Screaming Queen.

It’s really only when these two shameless hams are center stage that Xanadu rises to the level of a guilty pleasure. That it doesn’t manage to stay there for the entirety of its 90-minute running time has more to do with how simple its ambitions are, as opposed to the extent to which they are realized. While Xanadu hits its mark with perfect aim, it must be acknowledged that the mark has been set awfully low. The entire point of the show is to demonstrate how entertaining stupid can be — but smart humor is ultimately more nourishing than the brainless variety, and one can only consume so many Little Debbie’s snack cakes before the stomach, and the mind, begin to rebel. Calliope remarks in an aside to the audience that the show is basically “like children’s theater for 40-year old gay men”; that’s an apt assessment of the level on which it functions, and the degree to which the proceedings plays out like a live-action cartoon. While the right part of my brain had a perfectly good time laughing along with Xanadu’s silly gags and one-liners, the left part was rolling its eyes and marvelling at the fact that so many grown-up people in the audience were apparently willing to pay good money for pure, unadulterated schlock. There's a market for Statue of Liberty paperweights and I Love New York ties in Times Square; Xanadu is likely to appeal to the same demographic.

Still, I'm not a complete snob, and there’s something to be said for a show that keeps an audience laughing, and has no pretensions to be anything other than what it is: Junk Food. That being the case, Xanadu is at its best when it’s slathering on the cheez whiz and having fun at the expense of bad '80s movies. When the action moves to Mount Olympus, where Zeus and the other Greek Gods hold court, its no accident that they look and sound like Laurence Olivier, Maggie Smith and Ursula Andress in Clash of the Titans. The Electric Light Orchestra’s easy-listening score, consisting of disco-inflected compositions reminiscent of B-sides of Bee Gees albums, is infernally catchy, and director Christopher Ashley’s clever use of space is, in many ways, the show’s best asset. By the time the onstage audience members are called upon to crack their glo-sticks and dance along to the titular anthem, it’s clear that good sense has no place in Xanadu. It’s stupid and silly — perhaps too much so for my taste — but neither of those terms are used in the spirit of an insult or a reproach. For fashioning its audiences with a good time, Xanadu actually deserves a measure of respect.

Comments:
While I recognized from the moment I saw the movie (in its opening weekend no less!) that it was bad, I have to admit that I did have a fondness for its ELO soundtrack, which I practically wore out on cassette. I wonder if it's still around here somewhere.

Hafta believe we are Maaaa-gic. Nothing can stand in our way!

This, Can't Stop the Music and The Apple came out the same year! This should have been the end of the universe as we know it. (Flash Gordon came out that year too!) Those all proved that, contrary to popular belief, gay men can occasionally have horrible taste!

I can't believe I saw this, Flash, and Can't Stop in theaters. No wonder I'm all jacked up! What horrible movies!