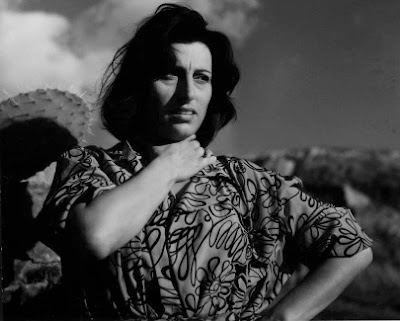 By Josh R
Of the nearly 50 films that Anna Magnani made during her storied career, only a handful are available for viewing by the general public. I can therefore lay claim to having seen only but a fraction of her life's work (would that I could rectify the situation by being granted unfettered access to the vaults of Cinecitta Roma or the archives at UCLA). As it is, Magnani fans can only be grateful that many of her most celebrated performances remain readily accessible, given what a remarkable and singular talent she was, and what an impressive career she had.

While there is a fair argument to be made for the fiery yet tender leading lady as the cinema’s first truly naturalistic actress, it is also worth noting than no other performer from her country — not even the great Mastroianni — occupies a more important place in the history of global cinema. Italy’s cinematic output before the advent of the neo-realist movement had been negligible; Magnani was the face of that movement, and the impact of her work was immediate and far-reaching. She was the first Italian actor to achieve global stardom, with crossover success working in foreign productions and in other languages. These facts, while impressive, do not fully account for what qualified her as a pioneer, firing off the first and most penetrating shots in an ongoing campaign that, even now, is still being waged. In breaking the rules, she nearly succeeded in changing them.

Put simply, Anna Magnani was not beautiful, thin or young. She was over 40 by the time she achieved her widest stardom, with a Rubenesque figure, coarse features and a throaty voice. There was some precedent for this: Marie Dressler, a portly character actress of the early sound era with the countenance of a St. Bernard, had risen to the rank of leading lady and marquee attraction not before she was 60. Dressler was a star, to be sure, but envisioning her in a revealing negligee playing out a slow-burning, erotically charged seduction scene with some bare-chested, brawny buck 10 years her junior — say Lancaster, Brando or Franciosa — gives you some sense of how radically different Magnani was from anyone who’d come before, or many who have come since. Not even Italy’s premier sex symbol, Sophia Loren, ever exuded as much earthy sensuality, or expressed carnal desire as freely or as frankly as Magnani did. In The Rose Tattoo, Wild Is the Wind and a handful of other films, Anna Magnani was not only cast as an object of male desire; she was so persuasive to that end that she made slim, fine-featured young things like Marisa Pavan and Dolores Hart look pallid, prissy and frigid in comparison. In film after film, she was an irresistible source of fascination for the opposite sex, and why wouldn’t she be? Pretty girls are often no more than just that; passionate women are harder to forget.

The daughter of an Italian father and an Egyptian mother, she was brought up in the slums of Rome — that she displayed such a keen understanding of the hard-edged survival instincts of working class women was the product of firsthand experience. She began her career as a singer, performing in nightclubs. By the late 1930s, she was almost as famous as Piaf was in France; their backgrounds and career trajectories were strikingly similar. She made many poor, time-marking films before being cast by Vittorio De Sica in Teresa Venerdi, the film that launched her acting career in earnest. Roberto Rossellini’s Open City, in which she was the aching soul of a war-ravaged Rome, paved the way for international stardom. For that film, she received the best actress award from the National Board of Review — the first time any major American prize had been bestowed upon a foreign language performance. She worked for Rossellini again as the peasant woman convinced she is carrying the child of Christ in L’Amore, which cast her opposite the young actor who had also written the film’s screenplay, Federico Fellini. In Bellissima, directed by Luchino Visconti, she was tough, testy and ultimately heartbreaking as the stage mother determined to get her tiny daughter into films. The scene in which she observes, unnoticed, as her daughter’s screen test is being mercilessly ridiculed by studio executives showed how effortlessly she could segue from forceful bravado to quiet humiliation and despair. While Magnani was almost always cast as hardy, hearty women, she invariably managed to locate the fragile, wounded soul beneath the armor; audiences were always provided glimpses of the nagging self-doubts, irrational fears and easily bruised feelings that can reduce even the toughest of cookies to a state of naked vulnerability.

The world took notice, and a somewhat reluctant Magnani found herself a sought-after commodity on the international scene. She was the tempestuous star of a commedia del arte troupe in The Golden Coach, giving a grandly operatic performance; the film’s director, Jean Renoir, declared her to be “the greatest actress (he’d) ever worked with”. A star struck Tennessee Williams wrote The Rose Tattoo, a raucous comedy-drama about an Italian widow coming to terms with her late husband’s infidelity, specifically for her. Magnani declined the invitation to appear in the stage version, fearing her English wasn’t up to the task; her decision to opt out effectively launched the career of the unknown actress chosen to replace her. While Maureen Stapleton earned much praise (and a Tony) for her Broadway triumph, by the time the film version was being cast, Magnani had decided to reclaim the property. As Serefina Della Rose, her volcanic fits of fury were juxtaposed with moments of aching tenderness and grief — not even the clowny showboating of Burt Lancaster could derail her intensity, and the raw emotionalism of the performance was astonishing. She won the Oscar for the film, but the American career never really took off; not many scripts were being written with middle-age women with heavy accents in mind. She was very good — actually, too good — for the pulpy Wild Is the Wind, which brought her a second best actress nomination. If George Cukor seemed at a loss for how to temper the hamminess of Anthony Quinn, he didn’t allow it to upset the balance of the film too badly, and Magnani’s scenes with Anthony Franciosa generated more erotic heat than her ones with Lancaster had. Sidney Lumet cast her opposite Brando in The Fugitive Kind, a reworking of Williams’ Orpheus Descending — the film, while a flop, actually was better overall The Rose Tattoo, and featured a performance by Magnani that was, in some ways, superior. Her failure to receive an Oscar nomination for that film is somewhat baffling in retrospect, considering how a lean a year 1959 was for leading ladies; but Magnani lacked the transformative abilities of Marion Cotillard, Charlize Theron and Nicole Kidman, and Oscar voters tune out when actors don’t exhibit enough range. As great as she was in The Fugitive Kind, some critics carped that, since her arrival in Hollywood, she’d been giving the same performance over and over again.

The Hollywood phase of her career behind her, she returned to Italy, probably somewhat relieved to get away from the type of films that were inclined to view her as an exotic; Magnani was too salt-of-the-earth to be considered anything of the kind, least of all by herself. Mario Monicelli’s The Passionate Thief provided her with a rare foray into the realm of comedy, while Pier Paolo Passolini’s Mamma Roma, in which she played a streetwise prostitute trying to give her teenage son a better life, was deemed too controversial to be released in the United States until 1995 (it’s not hard to see why). She was outstanding in a film that didn’t shy away from revealing her capacity for ruthlessness, or wondering how quickly unabashed, unapologetic sexuality can pave the way to madness. Stanley Kramer’s The Secret of Santa Vittoria was a reunion with an unrepentantly florid Anthony Quinn, allegedly a comedy, and definitely a mistake.

While Magnani got a late start in the world of film, her death from pancreatic cancer at the age of 65 was sadly premature. The conventionally pretty girls born around the same time had ceased to be interesting by the time they reached middle age; but at the age of 40, Anna Magnani was only getting warmed up. In her 70s, or even in her 80s, she might well have retained her ability to generate heat.

Comments:
Anna Magnani. What a completely unique and formidable talent. I really can't think of another actress that compares to her or is even able to be called the 'new Anna Magnani'. There was only one.

She was one of the great actresses, I agree, and I'm a bit angry that I still can't get hold of half her most famous films.

I haven't seen enough of her acting, but I love how she instantly owns the screen in *Mamma Rosa*. I think I will go rent *The Fugitive Kind* today.

Also... I like that you note the folly of seeing range in actors as some sort of mark of excellence. It can be irritating, as you noted, b/c it eliminates other actors from receiving acknowledgement.