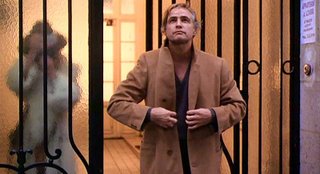 By Edward Copeland
Alas, if only the same could be said for Last Tango in Paris, which certainly doesn't slide through the viewer's eyes as smoothly. Marlon Brando's performance still provides much of the power of this once-controversial film, even if at times his great performance foreshadows future bizarre TV interviews with Connie Chung and Larry King years down the road.

From the opening scene, where a devastated Brando rails at the skies at a train station to, especially, a late scene where he vents next to the corpse of his late wife, Brando's performance remains brave and an illuminating portrait of inconsolable grief.

However, the rest of Bernardo Bertolucci's film doesn't live up to Brando's great work. First of all, the film's too plodding to run as long as it does. Second, Brando's co-star, Maria Schneider, simply isn't strong enough an actress to face off with Brando utilizing the peak of his acting powers, especially in the tedious subplot scenes involving her romance with Jean-Pierre Leaud and the making of a movie within the movie.

The focus should have remained on Brando's character, a middle-age man whose life is tossed asunder by his wife's suicide. His motivations seem clear but what sparks Schneider's character to engage in the twisted, anonymous sexual affair with him is never spelled out to any degree and the film's ending seems even more puzzling since Schneider's acting is at such a lower level and her character is such a cipher.

The sex, which once earned this film an X but now earns it an NC-17, still seems tame by today's standards to some extent, but while that may have been its drawing card in the 1970s, the main reason — the only reason — it remains worth looking at today is Brando. He infuses the entire film with a whacked-out gravitas that it wouldn't otherwise have without him.

Comments:
I am utterly fascinated by Marlon Brando. I show Streetcar in my US History class--the excuse is that Streetcar is a metaphor for Reconstruction, but really I think it's the only way my freshmen students will ever get to see Brando in his prime . . . and, of course, I just enjoy watching him twice a year.

In Streetcar, there's a tease for the first 15 minutes. You see Stanley in the background a couple of times, but you don't really get a good look at him. Then, all of a sudden, there he is--almost godlike in his beauty and sensuality. I've had students gasp at that moment. You'd think 18 year-olds would be jaded to a 60 year-old movie, and during the 2/3 of the movie when Brando is off-screen, they're pretty disinterested. But they are absolutely riveted when he's on-screen. What an actor he was.