Some things should stay in a time capsule 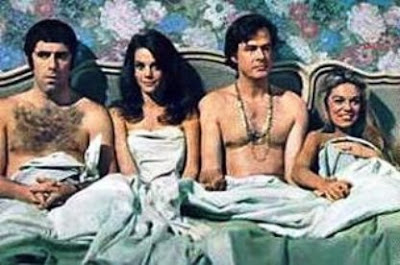 By Edward Copeland
Why is it that so often films made in the period they depict fail to look like legitimate period pieces years later? The answer, I believe, usually can be found in the fact that the movie itself is lacking in enough areas that what once were authentic period attitudes and decor end up looking downright silly. this certainly was the case when I watched Paul Mazursky's 1969 film Bob & Carol & Ted & Alice.

Part of what disappointed me in the film was that I expected more of a comedy but it really is deadly serious, a tone that fails to match with the silly period details such as encounter groups and the like. Really, I found it surprising that both Elliot Gould and Dyan Cannon managed to snag Oscar nominations for this, though Gould certainly has his moments, especially when he's confessing to an affair at a group gathering with a mouth full of peanuts.

Though Gould and Cannon at least get to play the more reasonable couple of the pair. Poor Robert Culp and Natalie Wood are saddled with the burden of being "with it" as they explore sexual and marital mores.

Of course, I'm curious as to how Bob & Carol & Ted & Alice played to audiences when first released. Mazursky went on to make other films, both better (An Unmarried Woman, Enemies: A Love Story) and worse (Scenes from a Mall, The Pickle), but this was the movie that really put him on the map. (On the DVD commentary track, Mazursky proclaims this the best film he's ever made.)

He's also done a lot of acting, including several appearances on HBO's great Curb Your Enthusiasm and two guest shots (including getting killed) on The Sopranos. For me though, Bob & Carol & Ted & Alice just left me cold.

The issues it explores have all been handled better in countless other films so the details of the time period just makes the film seem corny today. Mazursky does manage a couple of nice scenes and there is a strange hypnotic effect to the closing sequence, but what went on before that in the film fails to earn it.

Comments:
A mediocre film. I thought one scene was great, and that was Gould trying to talk his wife into having sex with him. I winced at the ending you found strange and hypnotic, though. It was strange and well...

It's not much of film; I think its popularity at the time, of both the critical and the commercial variety, had a lot more to do with the perceived novelty of its concept than with anything else. Of course, there's nothing particularly novel about it by today's standards, but remember, this came out four years after The Sound of Music.

I remember thinking Natalie Wood had never looked more beautiful, but the film was a bust. I like his BLUME IN LOVE, NEXT STOP GREENWICH VILLAGE and WILLIE & PHIL much better. I don't believe AN UNMARRIED WOMAN has dated well, either.

Wagstaff, on the commentary track Culp and Mazursky cite that scene as the one that made the movie and Gould says it's the one that got him and Cannon nominated.

That is the film's best scene. I'm not sure that either Gould or Cannon fully deserved their nominations (it was a strong year for supporting players), but that one scene arguably represents the best acting work of both of their respective careers.

You are soooo right about this movie. Another one for the time capsule: "Easy Rider."