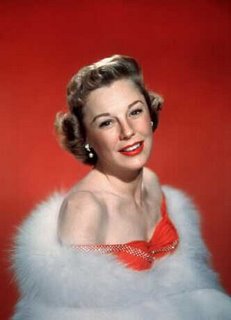 I hope that with Ms. Allyson's passing, she is remembered for more than just her Depends commercials, because her career was a lot more than that. Granted, I haven't seen some of her most notable works (such as 1949's Little Women where she played Jo).

Of her works that I'm familiar with — and I'm sure Josh R. will come to add more.

The Glenn Miller Story (1953): She played the rock of a wife to James Stewart's famed bandleader.

Executive Suite (1954): I'll be honest — I don't remember her in this one, though I found the entire film fairly forgettable.

She also did oodles of episodic TV work in shows ranging from The Love Boat and Hart to Hart to Airwolf and Murder, She Wrote.

Here is a link to The Washington Post obituary.

Comments:
It's impossible to attempt any understanding of the career of June Allyson without some discussion of how MGM operated under the leadership of L.B. Mayer, the most canny and ruthless of all golden age studio heads.

Stars were under contract; each was scrupulously groomed to fill a slot that required occupancy. Women were particularly disposable.

As the wife of Irving Thalberg, MGM's dynamic head of production, Norma Shearer was undisputed queen of lot in the 1930s, and got first dibs on every property that was up for grabs. She fancied herself a classical actress; her role of choice was the romantic heroine in the epic historical costume drama.

Whatever Norma wanted, Norma got - if she wanted to play Shakespeare's Juliet or Elizabeth Barrett Browning, it was done, and at exhorbitant cost. If Norma didn't want to do something, she didn't have to - a unique situation for any actress under contract, save Garbo. Crawford and Harlow never had any say in terms of what parts were foisted upon them during their tenures at Metro, and both of them consistently outgrossed Shearer at the box office.

After Thalberg's death, by necessity things had to change. Louis B. Mayer had to swallow hard when called upon to foot the bill for Marie Antoinette, the last project Thalberg greenlit for his wife and the studio's most expensive production to date; but Norma made a big stink and wouldn't have it otherwise. She didn't seem to grasp the fact that she no longer had carte blanche at the studio, that she could no longer get around Mayer by playing the Thalberg card.

Mayer needed a solution, and when he went to England in the spring of 1937, he found one. He saw a play in the West End featuring an unknown actress in a small role - a London-born redhead who'd abandoned a secretarial poistion to enjoy a modest career as a stage actress. She was pretty enough, had a dignified quality that Mayer found "classy", and seemed to be of a mild and accomodating nature in person. This, Mayer thought to himself, is how I'll keep Norma in line.

It was made clear to the widow Thalberg, in no uncertain terms, that if she didn't want to play the films the boss assigned to her, the new girl would. Norma pouted for a few years, and them left in a huff. The last straw was when she was asked to play the mother of an adult son in a film called "Mrs. Miniver". So the redhead, Greer Garson, got the job, and became the undisputed queen of MGM in the 1940s, playing the same kinds of roles on which Norma had made her name.

As soon as Garson started to get too big for her britches (she was, after all, the top female box office draw from 1942 to 1945), Mayer went to London again and came back with Deborah Kerr.

Such was the modus operendi for the studio throughout its heyday. When Jeannette MacDonald decided to quit (under fractious circumstances), Kathryn Grayson was brought in to trill in her place. When Harlow died, Mayer personally ordered little Lana Turner to bleach her hair before assigning her to every bombshell part that had been on her predecessor's itinerary.

All of which is to say that the world might never have heard of June Allyson had Judy Garland not been a studio problem child.

Allyson was part of the Broadway cast of Best Foot Forward that was imported, almost entirely intact, to MGM to repeat their performance for the film version. Mayer liked what he saw, and decided to keep her on specifically to hold over Garland's head when the reigning girl-next-door queen of the MGM musical became difficult to manage. In a rather malicious mood, for her first film assignment after Best Foot Forward, Mayer gave Allyson the opening number (the delightfully rambunctious "Treat Me Rough") in Girl Crazy - a Mickey Rooney-Judy Garland picture. It was a clear shot fired in Judy's direction - shape up, because we already have the next version of You being held in reserve.

Allyson's career was that of an understudy. When Judy wasn't mentally or physically able to do the job, or was just unwilling to comply, June was called in to pinch hit. As such, most of the films she made were second rate material - the kind that a bigger star would have passed on.

Her best vehicle of the 40s was the college musical Good News - a role Garland had passed on - and it shows that she probably had the chops (if not quite the pipes) to fill most of the other roles Garland played during that period. She nearly got Easter Parade, but Garland pulled it together in a hurry after being told by the studio that they were tired of waiting for her to get over her latest nervous breakdown and were giving the job to June. Mayer's methods were brutal, but effective - he knew how to appeal to the vanity of his players.

She had one number in Words and Music, singing the Rodgers/Hart classic "Thou Swell", but basically stole the film. Little Women was her best acting work to date, a more raucous and rough-edged Jo than Katharine Hepburn's but equally effective in its own right.

After the collapse of the contact-player system in the 1950s, she got to stretch a bit more. She won a Golden Globe as the struggling pianist who masquerades as a child protegy to get work in Too Young to Kiss. She was always at her best when playing rambunctious and uncouth - a brassy top banana with an infantile streak, but with enough girl-next-door charm to take the edge off her roughness.

Her most challenging role produced easilly her most interesting and ambitious performance, if not always her most successful. Jose Ferrer cast her against type as the passive aggressive wife who systematically ruins her husband's life in the hard-bitten drama The Shrike. To some extent, it revealed her limitations as an actress, but it was a stunning try nonetheless, with some genuinely startling moments. Otherwise, she always played sweet and virtuous fantasy wives to the likes of Jimmy Stewart and William Holden.

She played the Shearer role in The Opposite Sex, an ill-conceived musical remake of The Women which featured men, and the Lombard role in My Man Godfrey. In both cases, she didn't measure up to the original, but it was true to form that her last two major roles were, basically, other people's leftovers.

June Allyson was a talented woman who probably got screwed over by Hollywood in the long run. It's hard to say what she might have been if given a chance with better material, rather than what remained at the bottom of the bargain bin. Even in the midst of mediocrity, she radiated a real personality - in her best work, there are enough flashes of mischief, good humor, and buoyancy of spirit to indicate that she had the goods to be something more.

"Like the memory of her smile and her tears and her raspy little voice, some things will stay with us forever." -- from Jim Bishop's Tribute to June Allyson

She was the girl GIs gravitated towards, the kind of woman every man wanted to marry, and the special friend everyone wanted to know. She loved people, and they loved her back. She exuded positive energy and a sunshiny smile that was uplifting--and, somehow, just being around her was uplifting and made people feel better. She was, and shall always be, "Good News" itself. Harry James' trumpet (from "Two Girls and
a Sailor") is blowing in the heavens, and one can hear and see June Allyson exuberantly singing, "He's the young man with a horn!"

To know "Junie" (as she was personified by her closed friends), one only had to become familiar with Ella
Van Geisman, the little girl from the Bronx. She was a hard worker, and a powerhouse. She danced her
way out of poverty and, on a dare from her schoolchums, learned to dance like and eventually befriended
her #1 heroine, Ginger Rogers. And, out of a Third Avenue el, she learned to follow in the footsteps of her
#1 hero, Fred Astaire. She had a distinctive voice, and a winsome personality. And, it was not an accident
or coincidental that she became destined to become the actress and human being that everyone wanted to
emulate and have as their nextdoor neighbor. Hers was a rags-to-riches story, a kind of Shirley Temple
real-life doll (more than merely on paper), a Jo March tomboy with feminine grace. She was a princess,
who married a prince, Richard Ewing Powell. And Richard, or Dick Powell as he is known to the world,
was a kind man who loved kids. But, he was--and taught June Allyson to be, strong as a redwood--
and this served to be her strength, after Richard's passing. And, indeed, June Allyson went through an
extremely difficult period from 1963 (after Richard passed from this earth) to 1976 (when she married
an equally-kind man, David Ashrow). But, during this time of magnificent independence, the little girl became quite a woman. And, she was a loyal friend and partner (she was married to Dick Powell for
almost 20 years, and was married to David Ashrow for almost 30 years).

When I was a little boy, Dick Powell used to call me from Four Star Television (where he became a
still-respected Louis B. Mayer kind of television mogul), and he gave me a 16m.m. print of "Sister
Mary Slugger" (a segment I loved from early-television's June Allyson Show). I deeply cherished
and faithfully preserved the print, for years, and presented it to June Allyson on videocassette. And,
at the Judy Garland Festival in 2002, I had the rare opportunity to read my poetry to June Allyson.
Some people are fortunate to meet their heroine once in a lifetime. I was privileged and proud to
meet June Allyson on four special occasions: once when she was appearing in "Goodbye Ghost"
(in Coconut Grove, Florida), twice when she was appearing in "Forty Carats" (on Broadway), thrice
when she was appearing in "No No Nanette" (in Hollywood), and at the Judy Garland Festival (an
annual event held to honor June Allyson's friend in Judy Garland's hometown of Grand Rapids,
Minnesota). But, this shall not be yours and my final meeting. We shall see June, Judy, and Richard
at the rainbow--and June Allyson will be dancing and singing The Varsity Drag (from MGM's
"Good News")!

Author's Note: How about an award, or two, for June Allyson's performance in "Good News" and
"The Glenn Miller Story"?

Junie was, and shall always be, "Good News" itself. Harry James' trumpet (from "Two Girls
and a Sailor") is blowing in the heavens, and one can hear and see June Allyson exuberantly
singing, "He's the young man with a horn!"

This shall not be a final meeting of yours and mine. We shall see June, Judy, and Richard at
the rainbow--and Junie will be dancing and singing The Varsity Drag! Down on your heels,
and up on your toes!

To you, Pam and Rick, I send my best wishes.