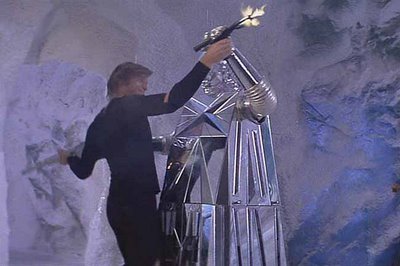 By Edward Copeland
Anne Thompson of The Hollywood Reporter has an excellent column about the recent trend of newspapers dumping its seasoned film critics in their futile quest for young readers. (Full disclosure: She refers to me in the column, but I think it sparks an interesting discussion regardless of my name being mentioned).

The Chicago Tribune recently dumped longtime critic Michael Wilmington and The New York Daily News similarly dismissed Jami Bernard. Personally, I don't think it is ALL lust for youth that is leading to these changes, but more economic concerns. Just this week, The Washington Post announced more staff buyouts that included longtime television critic Tom Shales, though he will apparently write on some sort of freelance basis. Newspapers are dying — and the majority of executives at the newspapers seem utterly clueless about what to do. (Just look at how ineptly The New York Times handled its journalism scandals).

The truth is that the bulk of the journalistic elders are borderline Luddites and the Internet has long puzzled them and now it has scared the shit out of them and they don't know what to do. Marketing idiots try to convince them that the answer is to get young readers, but they ignore the history of the medium. Young people, unless they were news junkies, NEVER read newspapers until they got older and with the advent of the Web, they really aren't going to get them now. (Show of hands — how many of you reading this subscribe to an actual paper made out of newsprint — newspaper Web sites don't count.)

The truth is so obvious that it amazes me that there aren't more executives who recognize that the demographic they should be targeting are in their 30s and 40s, those who have settled down and have actual driveways that newspapers can be tossed into. 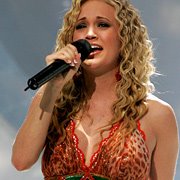 Instead, the culturally illiterate editors try to impose People magazine-style crap onto their newspapers of record. God help you if you live in the home state or hometown of an American Idol winner — those papers are likely to use any excuse to put that winner on their front page under the spurious assumption that it pumps newsstand sales. Even if that's true, it's a one-day shot at best — do they really believe that those who bought the paper to see the Carrie Underwoods, Taylor Hicks or Ruben Studdards of the world will return the next day to see what the city council did? Some of my journalist friends have reported that some papers are starting to see the light and abandoning the fruitless pursuit of the young, realizing that by doing that, they've alienated their true, older audience. 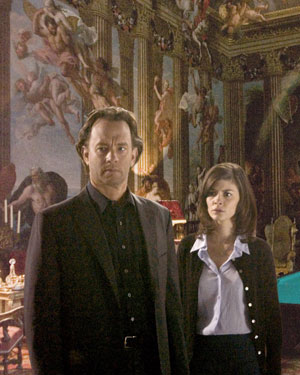 The downward slide of newspapers has been a long one. First, they made the mistake of trying to ape television, now they do everything to attract people they are never going to get. It's even more infuriating as newsholes shrink and true important local, national and world stories don't make the cut because they feel they better cover Brad and Angelina's babies or make lame attempts to turn The Da Vinci Code into a local story.

As for the future of film critics, I actually think they are in better shape than the newspaper industry. Really, the Internet has exploded the opportunities for film criticism — the only problem being that they don't usually come with a paycheck. However, in a way, it makes it a bit more democratic. Hollywood is starting to think they can get by without critics — and with the neverending Mambo line of celebrity promotion of movies, they may be right, but it still amazes me how many still feel they owe movie publicists something. In smaller markets that don't get screenings, many feel compelled to run opening day wire reviews of the movies as if they'll be punished by the studios otherwise. It seems to me the better action is to say nothing of the movie on opening day aside from "Not Previewed" leaving the impression the makers had something to hide and either review the movie the following week or ignore it altogether. What are they going to do? Pull their movie ads? They don't run 7 days a lot of the time anyway but they'd still need those showtimes, since many newspaper readers aren't the Net savvy types who can find the times online. Publicists were made to be pushed around — that's their job and it's a newspaper's job not to do favors for people they aren't getting anything from.

Comments:
Roundheaded Boy, where did your comment go? I was going to reply to part of it just to say that I think newspapers are dying not because of the natural progression of things but because most are run by either corporate penny-pinchers or morons. They are hastening their own demise.

As a copy editor at a newspaper, I must say I agree that they are only dying because they are run largely by morons ... As for film critics, there are still some great ones out there, but you're right, if they don't adapt to changing times more and more of them will disappear

Well, Ed, the reason I took it down is because I just don't agree and try not to get too exasperated by what I see as a lot of narrow perspective in the current coverage of the state of the media. (I don't mean that as a knock on you, just an honest difference of opinion). I don't think newspapers are dying. I think the culture has shifted away from newspapers as a primary source. So, their demographic will be smaller, but the demographic they keep will be a loyal one. And one attractive to advertisers, which is what keeps the engine turning. And, I think most smart papers are expanding their online efforts and turning the business into a hybrid of print and Web work that will be the new media model of the future. That's not dying, that's adapting. It's not the old days, I know, but I find the old days highly romanticized. I think the content and presentation of papers today is much better than it was 20-30 years ago and I bet a comparison of papers from the two eras would bear me out. I think a lot of this hand-wringing comes from people within the business who are resistant or scared of change. Believe me, I understand the anxiety. I just think it's misplaced.

In the last years I have seen many local newspapers launching "Youthful pages": by reading them, you would say that some newspapers' idea of young people is a bunch of illiterate MTV-brainwashed nitwits only concerned about donning piercings and tatoos and generally following any new trend, however silly ... and these sections are usually modelled upon that wild conception, to the point that they seem to get their collaborators among people who fit within that profile: I recall the "film critic" of one of these newspapers "Youth" inserts to hail "Ice Age II" as "The best film Disney has turned in years and a sure sign of Walt's company recovery"... Obviously, the guy didn't read the promotional info sent to the newspaper proper... why bother? probably his targeted reader won't be reading the paper at all.

Personally, I prefer to read on paper, with a nice cuppa of cofee by my side.

One other point I forgot to make is the absolute loss of mentoring between more experience journalists and young people entering the industry. Used to be editors would sit down with young reporters and point out their mistakes and help them to get better. Now, they just toss them into the cauldron, don't bother to look closely at anything they do and expect the copy desks to clean up their messes. Meanwhile, more and more of the experience journalists retire (on their own or are bought out) and the quality of the content gets worse and worse.