From the Vault: Uncle Buck 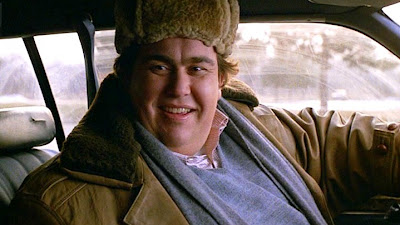 If self-plagiarism were a crime, John Hughes would be serving several life sentences by now, especially after his latest example, Uncle Buck.

Hughes began his career as a screenwriter on films such as Mr. Mom and National Lampoon's Vacation before finding success as a writer-director of teen films beginning with Sixteen Candles, which he played more as a drama in Pretty in Pink before telling the story again and switching the genders of the main characters in Some Kind of Wonderful.

During his teen phase, Hughes cranked out films such as The Breakfast Club and Ferris Bueller's Day Off and the abysmal Weird Science.

Once he "matured," he returned to the Vacation-type stories with Planes, Trains and Automobiles and the horrid The Great Outdoors. In between, there was the career aberration of She's Having a Baby, the tale of young yuppies and impending parenthood. So, where could John Hughes turn?

Hughes could have ventured into new territory, but, no, he decided to mix his two main genres and add a dose of a previous screenplay. The recipe has produced Uncle Buck, which takes the obnoxious male character (see vacation movies) and has him become homemaker (a la Mr. Mom) to kids, especially one 15-year-old girl.

In fact, the girl (played by Jean Kelly) is the best thing in the film. She's angry because her parents, typical Hughesian self-absorbed types, have moved from her beloved Indianapolis to a Chicago suburb (the setting of the vast majority of Hughes' films).

Kelly plays her character straight and extremely bitter. You know she isn't really mean, but she wields an icy stare and acts quite hurtfully to others. You can feel the sting of her words while you understand the reasons behind her venom.

John Candy gets some good moments as the title character, especially in a scene with the vice principal of a school, but Candy deserves better.

The script for the most part betrays all of the actors, especially Amy Madigan, who does the best she can with the seemingly unnecessary role of Buck's love interest.

Laurie Metcalf does her best with the underwritten role of the sex-starved neighbor (apparently a distant relative to Ann Jillian's character in Mr. Mom).

It is a shame that Hughes doesn't spend his time on better ventures. He has shown an ear for dialogue and even his worst films seldom lack a laugh. However, he needs to put his talent to better use.

Let me depart from picking on Hughes for a moment to praise him: At least he spared us from another of his requisite music video sequences in Uncle Buck.