From the Vault: Twin Peaks: Fire Walk With Me 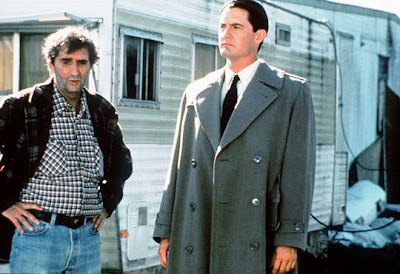 Way back when, Donna Hayward confided to her mother about the kiss she shared with her recently deceased best friend's boyfriend. "I feel like I'm having the most beautiful dream and the most terrible nightmare, all at the same time," Donna told her mother, describing both her situation and the television series where her character resided. Now, Donna is played by a different actress and Twin Peaks: Fire Walk With Me only contains the nightmare.

If you didn't like or watch Twin Peaks, you will hate — or, at the very least, be horribly confused by — David Lynch's movie prequel to the TV show covering the events that led up to Laura Palmer's murder. If you were a big fan of the series, you also will be disappointed, able to take comfort only in familiar associations and more apparent answers to the series' nagging mythological questions.

The film's lack of structure proves to be its biggest drawback. The first 37 minutes, by far the best part of the movie, recount the murder of Teresa Banks and its investigation by two FBI agents (Chris Isaak and Kiefer Sutherland). While this sequence eventually outwears its welcome as the audience waits to get to Twin Peaks, its tone most closely resembles the delicate balancing act that the TV show achieved.

Once the film does arrive in Twin Peaks, what little coherence the film had goes out the window as the movie transforms into Laura's one, long nightmare which will make little sense to the uninitiated and little difference to the show's fans. For the already converted, the disappointments come in many ways, including the absence of many of the series' best characters and the underuse of the ones who are present.

It's Laura's last week, but Josie, Ben Horne, Dr. Jacoby and others are nowhere to be found — and don't blink or you'll miss Peggy Lipton's brief appearance as Norma.

Another difficulty stems from the fact that the series fleshed out the final week of Laura's life fairly well and what we are watching seems like old news. The biggest problem for Peaks freaks though is the alarming number of continuity errors and inconsistencies between the film, the TV show and the spinoff books. Among them are:

1. The wonderful Ray Wise returns as Laura's possessed dad Leland Palmer, but the film's darkness masks all of Leland's positive qualities. In the series, the revelation that BOB dwelled in Leland and forced him to kill his daughter actually saddened the audience. In the film, none of the good side of Leland appears as he's portrayed as such a monster that it's inconceivable that authorities didn't nab him as the killer sooner. On the continuity side, Leland has flashbacks in the movie to his murder of Teresa Banks when BOB made it clear on the show that Leland knew nothing of his crimes until after BOB departed his body and Leland remembered all on his deathbed.

2. Mrs. Tremond and her magician grandson appear in the movie as if they met Laura for the first time during Laura's final week but her published diary shows her writing about them earlier than that.

3. Leo's T-shirt, a key plot point early in the series, was revealed to have been covered in blood belonging to Jacques Renault when Leo hit him with a beer bottle. In the film, it's Leland who hits Jacques and it appears impossible for Leo to have had his shirt stained with Jacques' blood.

4. The series referred to Bobby Briggs killing someone and the diary describes it in detail, but the depiction of the slaying in the film doesn't match the diary's account.

The inconsistencies and the film's subject matter, which basically is incest, makes me wonder whether Lynch really takes anything seriously. Fire Walk With Me, if it weren't for the existence of Dune, would be Lynch's weakest film by far and does little to quell discussions about his intentions. Aside from the criticisms, some things deserve praise.

Lynch creates some interesting images even though the production values look lower than the series'. Sheryl Lee's performance as Laura is good. She didn't impress on TV as Laura's lookalike cousin Maddie, but she scores here as fiction's most famous murder victim.

For those caught up in the Peaks lore, the film does toss them some juicy tidbits, such as explaining what the dancing dwarf really is and what happened to Agent Cooper following the series' unresolved cliffhanger. Beyond that, little remains to recommend.

Die-hard fans should probably see it, but don't get your hopes up. If you never cared in the first place, this isn't the place to start learning about the mysteries that dwell in the woods of the Pacific Northwest.