From the Vault: Twin Peaks: Fire Walk With Me preview 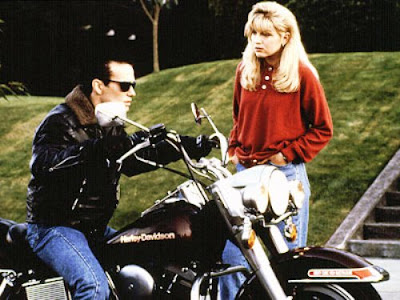 ORIGINALLY PUBLISHED AUG. 28, 1992
Grab a delicious slice of cherry pie, make sure the percolator is fish-free and watch out for owls: it's time for another journey to the town of Twin Peaks. This time out though, the fictional logging town is found on the big screen, not on the aptly named idiot box, and both Laura Palmer and her murderer, possessed father Leland, are alive in this "prequel" to the great but short-lived television series Twin Peaks.

Twin Peaks: Fire Walk With Me tells the story of what went on before Laura Palmer was murdered in the railcar. The film begins a year before the events in the series, telling of Teresa Banks' murder, before moving to the week leading up to Laura's murder. For those who don't already know, the film takes its title from the poem BOB and the One-Armed Man used to recite:

Through the darkness of future past, the magician longs to see.
One chance out between two worlds, fire walk with me.

As of this writing, Twin Peaks: Fire Walk With Me has not been screened for the press, so it's hard to say whether it will transfer well to movie theaters or whether it will please the die-hard fans who remain. In a way, it hardly matters. Well over a year since the final Twin Peaks episode aired and 2 1/2 years since Laura's body was first found "wrapped in plastic," eagerness bubbles over in the fans, anxious to see the show's characters once again. This film will probably serve the same purpose as political nominating conventions — it will preach to the converted. The film premiered early this year at the Cannes Film Festival, where most of the kind reactions were lukewarm, but this is one film that wasn't made for the critics, but for the fans.

The Cult Following
Twin Peaks has, in a very short amount of time, achieved a cult status similar to that which Star Trek enjoys, though it's doubtful the new film will equal the mainstream crossover appeal of the Star Trek films. Whereas the Star Trek series, at its best, used futuristic scenarios to examine present-day conflicts such as racial tensions or the Cold War, Peaks was set in the present to explore age-old questions of good and evil, redemption and retribution. Both series succeeded at creating their own singular mythologies.

Like Star Trek though, Peaks was doomed to a short life on network television. It was even shorter than the original Trek, which produced 79 episodes to only 30 for Twin Peaks (the last two episodes were combined into one, making Peaks air as only 29 episodes).

Thank Heaven for Ray Wise
Regardless of how well David Lynch transfers the world of Twin Peaks to the big screen, there is definitely one thing to look forward to, and that is Ray Wise's return as Leland Palmer. Those who care, and probably many who don't, know that Leland murdered his daughter Laura, forced to because as a young boy he allowed the demonic spirit BOB to inhabit his body. As BOB was finally driven out of Leland, Leland faced what he had done and was led into the light, dying in the ninth episode of the second season. Following that, Agent Cooper, Sheriff Truman, and the incomparable Albert and Major Briggs discussed the horror of what had occurred and the possibilities. Albert summed it up by theorizing that "the evil that men do" was all that BOB was.

In many ways, that episode was the seminal moment for Peaks fans, not only because it brought to a close the mystery surrounding Laura's death (or did it?), but because as Leland, Wise provided nearly as much of what made Peaks special as Kyle MacLachlan's Agent Cooper did and from then on, Leland was gone. Though MacLachlan, and Miguel Ferrer's Albert and Don Davis' Briggs among others, were still there to challenge the audience, Wise was sorely missed. Wise's performance was the best supporting performance on television in the 1990-91 season, though he failed to garner an Emmy nomination. As Leland, he sang, he danced, he was a grieving father, a possessed killer, a caring uncle and an able businessman. He was extraordinary and, if nothing else, it will be good to see both Wise and Leland back again.

There is an element of trepidation accompanying the film's premiere. Personally, I've had mixed reactions to Lynch's work in the past, and often thought that what made the series work was both the stretching of television's boundaries and the stringent nature of those boundaries as well. Without those boundaries, there is part of me that worries that Lynch will go overboard and ruin his most satisfying work.

In an Ideal World
In an ideal world though, Twin Peaks would still be on television, but it was murdered by both ABC — which shuffled its time slot and took it off the air for weeks at a time before throwing it into a mass grave of quality programming with thirtysomething and China Beach. Once Laura Palmer's murder was solved by Cooper after 17 episodes, the series had trouble finding its way, though even Twin Peaks at its worst was better television than most other network fare. By the end of its run, the show was beginning to make a creative comeback, at least in the eyes of the faithful. Jay Boyar of the Orlando Sentinel summed up the problem with the show recently when he wrote:

"What I failed to predict was the reaction of the nation's TV critics, who seemed almost frightened by the quality of the program. Most of them appeared to realize that Twin Peaks was something special, but it clearly made them uncomfortable. ... In the end, Twin Peaks eventually became too disorganized to sustain itself on the small screen."