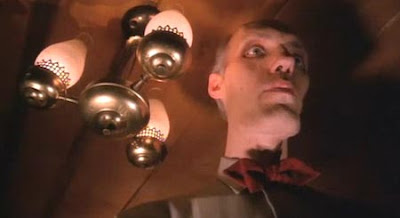 AGENT COOPER: Do you know why I'm whittling?
SHERIFF TRUMAN: OK, I'll bite. Why are you whittling?
COOPER: Because that's what you do in a town where a yellow light still means slow down instead of speed up.

After the week that Coop endured in Twin Peaks last spring, you can't help but wonder if he isn't a bit more cynical about the realities of life in the Pacific Northwest.


In case you've been lost in the woods, I'm talking about Twin Peaks and if you haven't seen this show, you must have seen the magazine covers or read the newspaper articles or passed by the spinoff merchandise. The media blitz about this series has ignited one of the largest pop culture explosions in years. For the benefit of those who are in the dark, a brief synopsis of the phenomenon known as Twin Peaks, which returns for its second season at 8 p.m. Sunday on ABC before settling into the 9 p.m. Saturday time slot.

"IT'S LIKE POPCORN"
When purchasing The Secret Diary of Laura Palmer and Diane...The Twin Peaks Tapes of Agent Cooper, the salesperson beamed with excitement.

"I didn't know these were out. I love this show. I watch it and I tape it and tape it and watch it. It's like popcorn. I just can't get enough."

It's an apt analogy, except that the program that marks filmmaker David Lynch's initiation (or is it TV that's being initiated?) is not your average, stale, imitation butter-flavored popcorn. No, Twin Peaks more closely resembles those strange, exotic flavors like jalapeno or bubble gum that come in large tin containers.

The story started when Pete Martell wandered out of the Packard Sawmill's residence for some early morning fishing and discovered the corpse of homecoming queen Laura Palmer. Twin Peaks has been labeled a soap opera and, while it contains those elements, as Lynch pointed out it isn't a parody. Soap operas get a bit of a bum rap (Try to keep quality control when you make 200-plus episodes a year), but the episodic nature of "Peaks" is part of its appeal.

Television — which aims for the lowest common denominator — works best when it presents shows with narrative continuity. Programs such as The Wonder Years which return to the same themes and characters often is an example of TV's main advantage over other media. Television can take the old movie serial one step further and let the viewer get to know the pasts and presents of characters week after week. It's what separates Twin Peaks from Who's the Boss?

THE TWIN PEAKS CHALLENGE
What makes Lynch and co-creator Mark Frost's series so exceptional is that it is a challenge — for artist and audience alike. Lynch's films have been exercises in extremes and the standards and practices of network TV force the creative team to push the boundaries more stealthily. On this account, the creators have been very successful — just ask Little Elvis.

For the viewer, the challenge is intellectual. The mysteries aren't in the vein of Murder, She Wrote. They reside in the realm of the bizarre, where dreams matter and references to film and literature abound. Another aspect that separates Twin Peaks from other series is its demand for repeat viewings. No one can watch sporadically or see episodes only once and expect to catch everything.

THE CINEMATIC INFLUENCE
In addition to the semantic references to Hitchcock, Otto Preminger's Laura, Billy Wilder's Double Indemnity and mythology, Twin Peaks has changed the look of television. The series is thought out like a film. Most episode TV is standard: You see two people talking or the point of view of a car chase. In Twin Peaks, the camera and cinematography combine to mesmerizing effect seldom seen on the small screen.

Add to that the wonderful music by Angelo Badalamenti and Twin Peaks transports you deep into the dark, mysterious woods, a world that Donna Hayward accurately described as the most beautiful dream and the most terrible nightmare all at the same time.

THE HYPE
Promotion can be a dangerous thing and the media barrage surrounding Twin Peaks could backfire. The currents of people determined to avoid addiction to the series and the moods of people who either 1) find the show too strange or 2) grew tired of waiting for the denouement of the Laura Palmer mystery, could end up sinking the show. Its Nielsen ratings, after an excellent showing for the heavily promoted pilot — plummeted and now it finds itself exiled to Saturday night, where most of its fans will either gather in large numbers or tape it. In fact, VCRs have created a new class of power leaders — those who have all the episodes on tape.

THE KILLER IS...
Before reading further, I must warn that I know the outcomes of last season's cliffhangers and I also have a theory as to Laura's killer's identity. If you want to retain the element of surprise, read no further. Leo, Nadine, Cooper, Shelly and Pete are all alive, though hospitalized. Catherine is missing from the mill, where she had been trapped in the blaze. Josie is nowhere to be found as well. These facts are revealed on the Cooper audio tape as well as Cooper's unsurprising assertion that Leo didn't have anything to with Laura's death but that a third man did.

Laura's recently published diary provides crucial clues to the puzzle, talking about a mystery man who haunted Laura's dreams named BOB, the same BOB seen by Cooper and Laura's mom in dreams and visions. On April 7, 1988, Laura wrote in her diary, "until I know for certain that BOB is really dead. Until there is a corpse that I can kick as many times as I please." Later, she writes about a dream of water where she dove into a lake "only to be pulled down by a hand as it grabbed my wrist and took me deeper and deeper and deeper. I told him I thought that hand was BOB's." In her final entry, she notes, "I know who he is. I know exactly who and what BOB is and I have to tell everyone."

In a teaser for the Sunday premiere, a tall man stands over the wounded Cooper and tells him, "Three have seen him but none his body. One only known to you" while a shady image of the dream BOB walks toward the camera.

Only one citizen of note was dead when the show began: Andrew Packard, Josie's husband and Catherine's brother who was supposedly killed in a boating accident. Frost has promised that — more or less — the killer will be revealed Sunday. I don't know if that's true or not, but I'm going out on a limb and predict that Andrew Packard not only is alive but that he killed Laura and attacked Ronette Pulaski, who will hopefully emerge from her coma to prove me right.

If the show does cop out and fail to reveal the killer's identity, I hope the audience sticks with it anyway. As Frost said, Twin Peaks is more of a journey than a destination and as long as the quality and quirkiness remain consistent, viewers deserve to be able to continue following its path.