From the Vault: Sean Connery 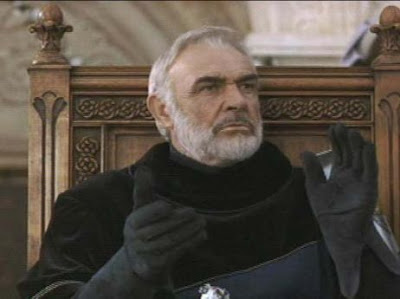 ORIGINALLY PUBLISHED JULY 2, 1995
Icons are nothing new for Sean Connery — he is the man who immortalized one named James Bond — so the idea of having Connery portray the legendary King Arthur seems as if someone should have thought of it a long time ago.

At 65, Connery has finally landed in a film Camelot in First Knight, the latest version of the legendary story of Arthur, Guinevere and Lancelot. Though Connery would seem a natural to play King Arthur, the character was not one that the actor himself had longed to play.


What attracted him, indeed what always lures him to a project, is the script.

"Invariably for me, it's the script, how it's written. In this case, I really liked it. I had certain reservations, as always, to clarify things."

Elaborating, Connery clarifies one of his initial reservations about the screenplay.

"(Arthur) has to be smarter than everybody else, or else the legendary aspect doesn't work. ... In this kind of movie, there always is a tendency to be overtalkative. Ben (Cross) had the same problem with his speeches, I think, and then found ways to trim them because if you're showing a lot of things ... there's a lot of things already in place that you don't have to describe."

William Nicholson, who wrote both the play and screenplay for Shadowlands, wrote the script for First Knight from a story he, Lorne Cameron and David Hoselton devised.

"Most of my information about King Arthur came from John Boorman, who's a great King Arthur nut," Connery said, referring to the director of the 1981 King Arthur tale Excalibur. While Excalibur had a much more far-reaching story, First Knight concerns itself first and foremost with the love triangle.

"(Boorman's) always interested much more in the mythological side of it, Merlin and such. I like the concept Nicholson had in (First Knight) of simplifying the foundation of the triangle, bringing in somebody from the outside who's got nothing to lose ... I think it sort of clarifies what it's about, what Camelot's supposed to be."

The concept of Camelot is, perhaps, what Connery thinks will appeal most to audiences today.

"The idea I wanted to have is that we were talking about a state like Israel — Camelot in a sense. I'm not saying that Israel is Camelot, but it's surrounded by attacking forces and what one wants to have in Camelot is the idea that it's run by a guy that can outwit the opposition, that has an army which is more defensive than offensive, that there's a compliance hand-to-hand with religion and everyone in the society is going to get a fair crack at the whip. That's the dream."

Connery also thinks familiarity with Camelot and Arthur could be an attraction.

"I would think 90 percent of people know about King Arthur. Maybe not, with kids in school now. I'm always surprised about how little they know about these things."

Those who do relish the idea of a Camelot, should welcome the movie.

"I think, especially now, the idea of a Camelot is interesting and almost desirable. When you look around and you see Bosnia and Chechnya, everything seems to be such a mess. Everyone's complaining about every society. There's never been a time, in my life, ... where everyone's so (ticked) off with government, whether it's left, right, center or whatever. Everyone seems to be pretty disenchanted, so the idea that there was a Camelot would be terrific."