From the Vault: Nobody's Fool 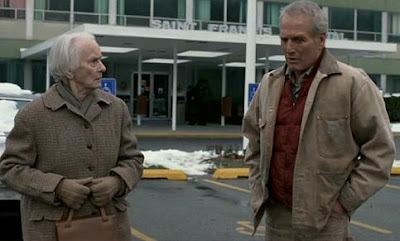 With stale formula dominating most films, the refreshing change of pace of a film that doesn't rely on plot seems all the more welcome when it washes over you.

Nobody's Fool, a charming slice-of-life, wraps itself around a moviegoer like a warm afghan on a cold winter day.

The key to the movie's charms fall squarely on the shoulders of the never-better Paul Newman, whose portrayal of Sully, a 60-year-old construction worker with a bum knee and estranged family, recalls the days when The Hustler and Cool Hand Luke made him a star.

Sully is a bit of a scoundrel, a man who walked out on his family 30 years earlier and has committed a variety of misdeeds against the inhabitants of his small New York town, North Bath. Despite the incidents, Sully tends to cast a spell on everyone, from his former schoolteacher who now is his landlady (Jessica Tandy, in one of her final screen roles) to the boss he hates (Bruce Willis), to the boss's wife (Melanie Griffith) to the grandson he's never met (Alexander Goodwin).

Based on a novel by Richard Russo, much of the film's strength comes from the creation of the town itself. There fails to be even a passing character who isn't well-drawn and welcome. In many ways, Sully's universe has been so well cast and conceived that Nobody's Fool plays as if it's a promising pilot for a good television series.

Writer-director Robert Benton paints a vivid portrait of life among the mostly blue-collar residents of North Bath and gives Newman the best role of his late career. Newman provides an ingratiating performance that deserves to win the 1994 Oscar for best actor because it is indeed the year's best.

The rest of the cast are great as well, from the exquisite presence of the much-missed Tandy to Willis and even Griffith, who finally breaks her streak of bad performances in even worse films.

When this type of movie comes along, its unpredictable course not only relieves the viewer of his certainty as to where it's headed, it allows you to relax and not worry about the outcome at all. Despite some brief slow stretches, Nobody's Fool is that rare movie that leaves the audience wanting more even as they are more than satisfied with the gift they've been given.

Comments:
Charming ways of small-town life worked until the 75-minute mark. Sully's confrontation with Raymer and strip poker game with handgun and prosthetic leg were too much. Rub's reaction to Sully spending time with Peter is too much. Grow up! There is some wonderful dialogue here and a good cast.