From the Vault: Mo' Better Blues 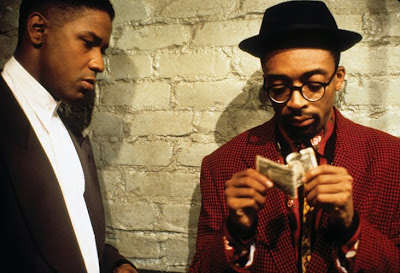 Peeking out beneath three of the actors on the Mo' Better Blues poster are posters of Spike Lee's previous film, Do the Right Thing. It's as if Lee knew the inevitable comparisons that would be made between his new film and last year's masterpiece.

Comparison won't be the main factor behind the disappointment with Mo' Better Blues. Instead, the lack of a cohesive screenplay and the presence of a script in need of major reworking dooms the new movie.

Mo' Better Blues stars Denzel Washington as Bleek Gilliam, a man who hated taking trumpet lessons as a child but who learned to make a living off the instrument anyway. Bleek's selfishness requires the attention of two women (Joie Lee, Cynda Williams) to meet his needs. but he still chooses music over both of them, at least initially.

Bleek's loyalty proves to be another flaw, continuing to let his childhood friend Giant (Spike Lee) manage his career despite the fact he does so poorly. At least that's the impression viewers are expected to take away from the film. Lee's script seems to be a filmed outline of plot points that were never fully fleshed out and doesn't allow much in the way of character development.

The audience never fully understands where their interest should focus. Is this the story of a man and his music? A story of a man and two women? Perhaps it's about loyalty and relationships between friends who work for and with each other. The answer seems to be all of the above but, as in Lee's School Daze, the strands fail to form a cohesive whole.

Selected bits remain that work, such as a wonderful scene where Bleek's two-timing ways catch up with him in his bedroom, though most scenes go nowhere. The worst of this comes near the end where a situation begins and rushes to completion as the film covers six years in about 15 or 20 minutes.

Furthermore, unlike School Daze, whatever story Lee desires to tell fails to be readily apparent. School Daze failed because it tried too hard to do too much. Mo' Better Blues fails because it doesn't try hard enough to do anything of note.

Surprisingly, the music itself also weakens the movie. Granted, the story concerns music but the film's score intrudes continuously in every scene to the point of distraction. On the other hand, two numbers ("Pop Top 40" and "Harlem Blues") manage to give the film some lift it desperately needs, possessing all the energy and spirit the rest of the film lacks.

Lee's work always excites visually, but this time the story and structure do nothing to enhance his arresting imagery.