From the Vault: Malcolm X 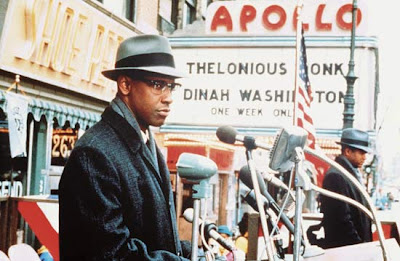 Certain to be both overpraised and overcriticized, the best assessment of Malcolm X is that it's a good film with many flaws, though the problems are cinematic, not political. Adapted by Spike Lee from Malcolm X's autobiography and a screenplay by the late Arnold Perl, Malcolm X approaches its subject epically in both scope and length but still fails somehow to make the civil rights activist's evolution from drug-addicted thief to martyred leader consistently compelling.

Much of the problem lies in the fact that while Malcolm's early life of crime and love of lindy-hopping is fascinating, it doesn't justify taking up more than a third of the film's 201-minute running time with Lee's stylized, nostalgic look at that chapter. While it is important and inspiring to see where Malcolm came from and what he overcame, the reason Malcolm X is well-known is because of what he did following his prison conversion to Islam, not before.

The film itself best emphasizes this point as it picks up speed once the imprisoned Malcolm (Denzel Washington) begins to learn about and becomes a follower of Nation of Islam leader Elijah Muhammad (Al Freeman Jr.). Despite the drag they make on the entire film, the early sequences are notable for containing the film's best performance, Delroy Lindo as West Indian Archie, who becomes a sort of criminal mentor to the young Malcolm.

As for the latter two-thirds of Malcolm X, the news is much better as the slain leader's words and deeds fill the screen with powerful sequences, including a march on a police station when an acquaintance is beaten and arrested. There also are quieter sequences that work, such as Malcolm's gradual realization that Elijah Muhammad may not be all that he says, culminating in Malcolm's Hajj to Mecca, as well as a prison debate between Malcolm and a priest (a nice cameo by Christopher Plummer).

One of the film's other major weaknesses is an instrumental score by Terence Blanchard that is so overblown and intrusive, I had to check the credits to make certain Lee hadn't hired John Williams by mistake. When the soundtrack relies on music of the different eras, it works, but Blanchard's composition is often distracting.

For anyone who has read The Autobiography of Malcolm X, they may have some questions about the choices Lee makes. For example: Why does Malcolm's pilgrimage to Mecca, a pivotal chapter in the book, seem to take up so little screen time? When Malcolm announces how the trip changes him, the film audience isn't as clear on what caused the effect as a reader of the book is.

Why was the composite character of Baines (Albert Hall) created? In the film, Baines is supposed to be a fellow prisoner who reinforces Malcolm's grammatical skills, turns him on to Elijah Muhammad and grows jealous of Malcolm's notoriety to the point of omitting him from the Nation of Islam's newspaper. Readers will realize that these actions were attributed to (at least) three different individuals: a prisoner who only helped Malcolm within the prison's walls, his brother Reginald, who brought Malcolm into contact with the Nation of Islam and Elijah Muhammad's son, who ran the publication.

Finally, why are Malcolm's siblings, such as half-sister Ella and the aforementioned Reginald, nonexistent in the film when they each played important roles in Malcolm's life?

Washington's performance is subtle. There are few big moments, but plenty of small ones, from a marriage proposal by phone to the small smile of relief before assassins shoot him down.

As for Lee as writer and director, he has again failed to hit the artistic heights of the incomparable Do the Right Thing. His direction is obvious and plodding at times and, once again, his script seems to lack structure and focus, though this may have something to do with how he adapted the previously written screenplay.

Despite my reservations about the film, Malcolm X is often riveting and works well as a sort of historical Cliff Note on the life of a man few today know much about. By the time, Lee brings Malcolm's story to a close with two powerful epilogues, most of the gaps the film has had until that point are filled and Malcolm's message becomes loud and clear, resonating with the viewer long after the credits end.

By the end, one has witnessed the evolution of a man and his philosophy, and a scope of American history seldom seen on screen. It's a shame that so much of what precedes those final passages is sloppy, but the power of its ending and of isolated moments before make the journey more than worthwhile.