From the Vault: Jungle Fever 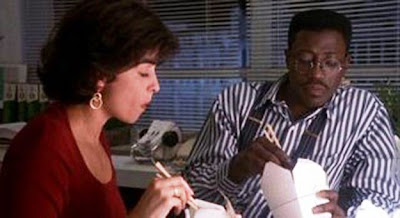 From the moment the opening credits begin, with its flying signposts and bouncy Stevie Wonder title song, the audience knows it's in the hands of a talented filmmaker.

Spike Lee scores again, continuing his record of making a successful film every other time, with Jungle Fever, though it doesn't equal his incomparable Do the Right Thing.

The film is being sold as the story of an interracial romance between a married architect (Wesley Snipes) and his Italian temporary secretary (Annabella Sciorra). However, Lee seems to lose interest in this story thread once it has served its purpose as a catalyst for the other characters in the film.

Essentially, the film focuses on race, taking themes Lee didn't develop well enough in School Daze and presenting them in an entertaining and thought-provoking manner. The film works best displaying microcosms of both African- and Italian-American communities.

Where the film comes up short is by failing to create a definable relationship between Snipes and Sciorra. Both actors are good, but the film doesn't make the effort to create a legitimate romance or a curiosity-seeking romp.

What Lee's film does do well is showing the reaction of the families to the affair, from Snipes' father, a defrocked preacher (Ossie Davis) who delivers a powerful speech about race-mixing to Sciorra's racists father and brothers, two-thirds of whom got whacked by Joe Pesci in Goodfellas.

John Turturro's character of Sciorra's fiance provides another nice element. His sweetness and earnestness shine brightly against the harsh bigotry that surrounds him. After playing the racist son in Do the Right Thing, Lee presents Turturro with a wonderful contrast and gets Turturro's best performance to date as a result.

The single most memorable performance belongs to Samuel L. Jackson as Gator, Snipes' crack-addicted brother. Jackson makes Gator humorous, pathetic and frightening and leads the film into its most harrowing sequence inside a crackhouse.

Lee directs as well as he ever has, but he still encounters trouble with his script. If he hones his narrative skills, this major talent could join the leagues of Martin Scorsese among great American filmmakers. In a summer filled with big-budget action and lame-brained comedies, Jungle Fever, despite its script flaws, deliver a welcome breath of fresh air.