From the Vault: Irene Worth 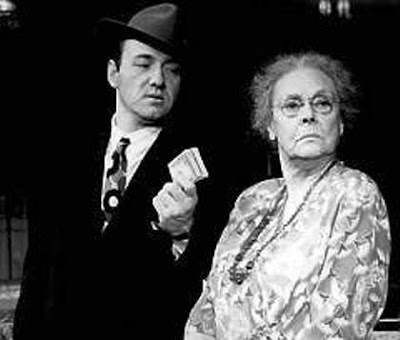 Neil Simon's Lost in Yonkers marks Irene Worth's third film appearance since 1982. For those of us who live far from New York and the Broadway stage, that measure of film output is far too small to satisfy those who admire this great actress and is too sparse to make Worth the household name she should be.

As Worth repeats her Tony-winning performance as Grandma Kurnitz in the film adaptation of the Simon's Pulitzer Prize-winning play though, all fans of great acting are afforded the opportunity to watch a master at work.

Born in Nebraska, Worth attended college at the University of California at Los Angeles before making her Broadway debut in 1943. Soon after, Worth moved to London because she "wanted to be a classical actress" — a feat she accomplished when she became an acclaimed member of the Old Vic, Royal Shakespeare Company and Royal National Theatre repertories. Her awards are numerous, including Tonys for Tiny Alice and Sweet Bird of Youth in addition to the one she won for playing Grandma in the stage version of Lost in Yonkers.

"I've been awfully lucky ... I've had the luckiest, most fulfilling career — a gift."

Though her film work has been intermittent at best, Worth denies that she avoids making movies. "Oh no. Nobody asked me," she said. In fact, when it came time for the film version of Yonkers to be made, Worth was resigned to not being asked to re-create Grandma, since theater actors are seldom asked to re-create their roles on film.

"I knew that I was in the running but I had no idea I would get the part. I wouldn't have been disappointed because I didn't expect it. I just took it for granted that somebody totally unsuitable would have been chosen," she said, tongue planted firmly in cheek.

Audiences should be thankful Worth was allowed to play Grandma again, because she makes this character — a cold, frightening tyrant of a mother hiding her emotions for fear of reliving past hurts — believable and empathetic.

"I didn't approach her, not at all, differently. I was awfully glad that I could rest a year, but it was like a continuation of the performance with Mercedes (Ruehl). I was so happy we could continue that collaboration. We developed what we did for the film without even discussion. We somehow instinctively acted together and adapted ourselves to the demands of the films."

Worth does admit that some changes are required for film acting.

While Worth credits Gene Saks, the director of the play, with giving her her performance, she also gives due to director Martha Coolidge for guiding her through the film version of the role.

"I don't know much about film acting. I was always saying to her, 'Don't let me go over the top. Don't let me do too much.'"

Many of the film's best scenes revolve around Grandma and, though filmed well, at their heart it is Worth's presence and talent that makes them come alive. Despite the vividness of her performance, Worth says she hasn't had a figure in her own life like Grandma.

"I dislike her but I like her because I have great sympathy for her. Grandma has no imagination and she's uneducated. She has no sense of humor — she's a lonely woman."

When asked what she was thinking during a pivotal scene toward the end of the film, Worth hedges.

"I wouldn't tell you. That's why it strikes you. In acting, if I explained all the things that I do it would make them banal. In the end, I wouldn't have explained it, but I could have lessened what you thought about it. If I don't try to put it into words, you'll have a much deeper experience — and that is why acting is so wonderful."

One of the few scenes that makes the audience feel for Grandma is a scene not easily described. It involves a handkerchief and a reaction shot that is stunningly reminiscent of the best work of the silent screen era. Worth had trepidation about attempting the "hanky scene."

"I said to Martha, 'I don't think we can do this.' She said, 'I do. Try.' I would not be able to tell you what goes on in the process when I do something like that. I was frightened to do it and I thought, 'If I bring this off, it's going to be a unique gesture that's never been done in a film — ever. It's almost an antique gesture. At first I thought, 'I won't get away with this' and then I thought, 'I hope I do, I hope I do. I will use every skill I can try and make this work' and if you think I did, I'm grateful."