From the Vault: Hoffa 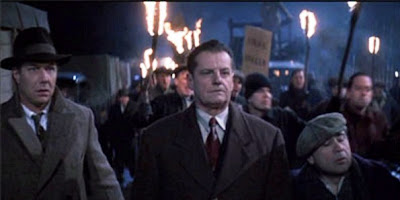 Jimmy Hoffa was a storyteller, a man who would rather finish a tale than be interrupted for news, who recognized words as the key to selling an idea or, in this instance, a labor movement.

It's a shame that the people who made his screen bio didn't share this focus on narrative because the film's lack of coherence leaves Hoffa as elusive to the public as he was before the movie began.

Though titled Hoffa, the film actually focuses on the story of Bobby Ciaro, Hoffa's right-hand man played by Danny DeVito, who also directed. While DeVito gives a solid performance, neither he nor Hoffa are particularly well-defined.

Jack Nicholson immerses himself in the role of the presumably late Teamsters leader. He hasn't disappeared this completely into a part since Prizzi's Honor. Unfortunately, the script by the usually reliable David Mamet doesn't allow us to know what made Hoffa into the man he was and even skimps on the details of what made him famous. As a result, Nicholson's performance ends up being more exercise that interpretation.

Because of the shortfalls of either the script or the editing, Hoffa never clearly establishes a sense of time or place. Years can be identified only if other recognizable time elements pop up like Robert Kennedy's presence as attorney general or the poster for A Clockwork Orange, assuming you know that film came out in 1971.

In the latter case, the time cue leads to the suspicion that much of the film lies on the cutting room floor. Hoffa leaves prison in 1971 and the movie alludes that the events shown in that year directly lead to his disappearance. However, Jimmy Hoffa didn't vanish until 1975. What happened in the intervening four years? If the film knows, it's not telling.

This exemplifies the problem of the entire movie, which doesn't seem to have an attitude about Hoffa or his accomplishments. In a way, it admires Hoffa but it fails at showing how his work with the Teamsters actually helped workers.

Perhaps the saddest thing about Hoffa is that DeVito directs with a lot of flair. His segues and visual cues, his fades and individual sequences are outstanding, but the lackluster script squanders his techniques.

The longer Hoffa went on, the more disappointing it became. It has good actors, good direction and a usually good screenwriter. Why this film went so wrong remains as big a mystery as Hoffa's final resting place.