From the Vault: Blade Runner 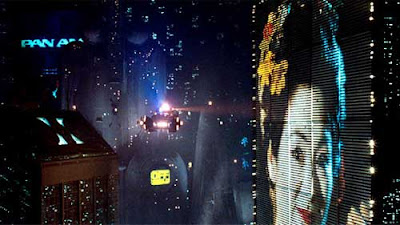 Mood triumphs in Blade Runner and the audience prospers with the chance to see this 1982 visual spectacle back on the big screen. Not only is the amazing widescreen imagery of Ridley Scott and the outstanding imagining of Los Angeles in 2019 spared from the evils of home video, but Scott takes advantage of the chance to re-release the film the way he originally wanted — sans narration and with a different ending.

Personally, the re-release offered me a rare opportunity: I never saw the original cut in the theater and since I had no access to a letterboxed copy that preserved its widescreen images, I couldn't sit through it on television. Therefore, I viewed the film with fresh eyes.

Harrison Ford stars as the blade runner, a 21st-century cop whose job is to "retire" errant replicants on earth. He's hardened and unwilling to take his assignment, but relents anyway. His character and the movie mix an interesting brew of science fiction and film noir.

While the film slows down at times, it never lacks for hypnotic visuals thanks to the brilliant set design and unique vision. From the towering video images on skyscrapers to the bizarre world inside J.F. Sebastian's apartment, Blade Runner creates a fascinating world.

If the film contains any real problem, it's that its temperature registers so cooly. It succeeds at attaining a certain ambiance, but it suffers by not delving more deeply into the human aspects of the story.

It hints at them, through Sean Young's performance as Rachel, a replicant who believes she's human, but it doesn't quite satisfy on that level. For pure imagery though, this 1982 film offers more than practically the entire crop of summer films combined. Don't miss the chance not only to see Scott's preferred version but to watch it on the big screen, the only place that will do it justice.

Comments:
I think the depiction of the humans as disconnected is intentional, not an oversight. By depicting them thus Scott could then contrast them with the replicants, who, ironically, are more in touch with their 'humanity' than the humans are: Rachel cries, Pris and Roy joke with Sebastian, Roy waxes philosophical, Leon longs for his lost photos. In the end Roy saves Deckard's life just so that he can relate some of his memories. And what kind of memories are they? "C-beams glittering in the dark near the Tannhauser gate". He's saying to Deckard "Wake up! You don't know how lucky you are."